Both having already clinched tickets to the 2020 Olympics, the USA beat Canada, 3-0, to claim the Concacaf Championship title. Although the Canadians never looked capable of winning the game, the USA's sloppy play -- which included 44 misplayed passes in the first half and countless ineffective crosses -- kept it close for an hour. 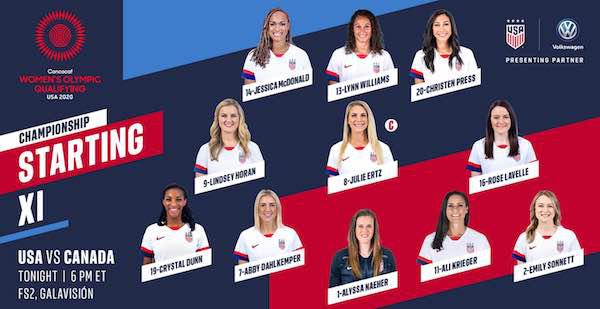 Alyssa Naeher stopped a weak shot by Janine Beckie in the 32nd minute and thwarted a Christine Sinclair one-on-one in the 38th.

Crystal Dunn, the only player to start every game of the tournament, sent five passes to Canadians in the first 11 minutes and didn't improve. The other outside back Emily Sonnett had much less of the ball and also handled it poorly, like under-hitting a pass to a wide open Lindsey Horan on the wing deep in Canadian territory. Ali Krieger robbed Sinclair of a chance in the 24th minute but twice returned the ball to the Canadians after winning it later in the first half. Abby Dahlkemper cut off a Canadian counterattack early in the second half.

Christen Press hit the crossbar with a 28-yard half-volley to provide the only first-half excitement, but feebly wasted a chance in the second half after breaking through the backline and failed connect a simple pass to Lynn Williams in scoring position in the 49th minute. Center forward Williams shot weakly to the keeper early in the second half, after an invisible first half, then became far more active. She fired home the first goal from 11 yards after right back Jayde Riviere gifted her the ball. Williams also nodded the ball to Horan on the second goal and set up Megan Rapinoe's late goal. Jessica McDonald sent in hopeful, ineffective crosses.

Megan Rapinoe ended a poor showing in this tournament with a crisp finish in the final minutes to provide the USA with a flattering scoreline. Samantha Mewis delivered the one cross of the game that produced -- after Williams relayed it to Horan.