U.S. women accomplish mission but Vlatko Andonovski evolution is yet to come

Sunday's Olympic qualifying final against Canada, and indeed the whole of Concacaf's eliminations ahead of the Tokyo Games, went just as anticipated, with the U.S. demonstrating, for the umpteenth time, the distance that separates it from the rest of the region in the women's game. 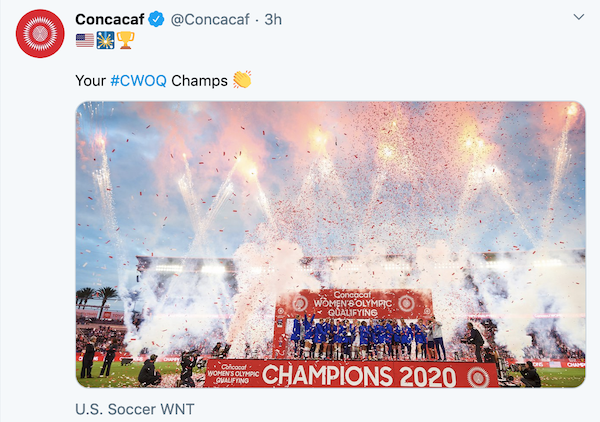 The Yanks were clearly the better team in the 3-0 victory over Canada at Dignity Health Sports Park -- a triumph built on Lynn Williams' spectacular goal and two assists and some untimely Canadian errors -- but dominating this tournament is a rather low bar for a team that, since its inception 35 years ago, has pushed the standard for women's soccer, or done its best to do so, nearly every step of the way.

The USA, which like Canada booked its place at the 2020 Olympics with a semifinal win Friday, wasn't at its best in Houston and L.A., not that it needed to be. Five shutouts, no margin of victory less than three goals -- and against low blocks and bunkers, with Canada, a second-tier world power, spreading five across the backline with the midfield on top of that -- and no real surprises, one way or another.

The Yanks were too often imprecise in the attack, struggled to pass the ball efficiently -- they misplayed 44 passes in the first half and 72 over the full 90 against Canada -- and were a ways off the standard to which they hold themselves.

If they're a 10 when things are sharp as can be, when everything is flowing as they like, what were they in this tournament?

The evolution under Vlatko Andonovski, who has won all seven outings since taking over for Jill Ellis at the end of October, is just starting, and his players are in preseason form. Perfection, always elusive, wasn't the aim, and things will need to be better when the U.S. gets to Tokyo come July.

“I think our control of the game while we have the ball [must evolve],” said Rapinoe, whose 87th-minute goal was her first for the national team since last year's World Cup title-game triumph over the Netherlands. “I think we still just don't quite have the balance right of when we're going, obviously if it's a transition moment we're going, but when that sort of breaks down or that's not quite on, I think sometimes we still just force it and force it and force it.

“And then too many turnovers, and we allow teams to stay in the game and feel like they're in the game when we need to control it better. And, really, [we need to] pick our moments, when we're getting the absolute best moment to go forward, not just an opportunity.”

Andonovski defines what he wants to see as “attractive, attacking and aggressive soccer.”

“I don't think we have achieved it,” he said, “but you can see moments -- in some games more, some games less -- but we're definitely moving in the right direction.”

He said he was most happy with his team's high press during these five games, that “even against good teams, when we're synchronized, when we're organized, that no team can break us down.”

The rest? Give it time.

“I think that we have to be more sophisticated in the final third of the field,” Andonovski said. “We have to be more precise. Sometimes we do some great things, some unbelievable things, but I think sometimes it feels like we're still a little bit out of sync.

“But we've only been together now for a couple of weeks before this tournament, and more time we spend together, better we're going to get.”

Captain Carli Lloyd, who watched the final from the bench, said she thought the U.S. grew during the tournament and nicely spotlighted its “massive” depth.

“I think the way he is wanting us to play requires you to be switched on for 90 minutes,” she said. “The high-pressing, the triggers, everybody being in sync, on the same page. But I think there's a lot of good things that came out of [this tournament]. And I think the biggest thing is when we buy into doing what we do, we are lethal. We're lethal on winning the ball and then going to goal, and we have wave after wave of that. ...

Andonovski favors a more “methodical” approach on the field, more buildup, than the U.S. played with under Ellis and her predecessors. Rapinoe likes that and is looking forward to seeing the new coach “start to layer in a more nuanced midfield play and getting them on the ball more.”

“Lindsey [Horan], Sam [Mewis] and Rose [Lavelle], particularly, in those pockets,” Rapinoe said. “They really need to be the ones pulling the strings for everyone else. The more they're on the ball, the more that it opens up for everyone else. I think that's kind of the next big step this team needs to take.”

“Yeah, I hope so,” she said. “I think we're always going to have that physicality and just that speed and power up top and, really, all over the field, but we need to balance that. I think you saw that in the World Cup, too. We were able to overcome it, but it was a big weakness of ours.

“Not being able to control games with the ball, and when you don't do that, you defend a lot, and you saw that a lot in the World Cup, of us having to drop back into a much more defensive position and really hit teams on the counter a lot. Hopefully, we're evolving out of that and past that, and I think we'll be able to be more dangerous because of that.”

The key to all of it, Lloyd asserts, is the mental approach that has governed the program since Anson Dorrance started it on the path to the first World Cup triumph in 1991.

“At the end of the day, there's a mentality that we need to bring every single day and every single game we step onto that pitch,” she said. “That's what's going to separate us [from the competition]. Of course, the soccer bit, as well, but every time we step out there, we have to have that mentality.

“[Andonovski] holds players accountable, and he fine-tunes these little details that are going to make the huge difference. As he continues to grow and be comfortable with this team, we're going to grow, as we just saw with these five games.”

Lloyd said the U.S. was “different numbers” during “different spurts,” on the 10 scale, in these qualifiers and, overall, “seven or so.” Ultimately, the Yanks are playing against the standard that has been set by U.S. teams past and present more so than against the opposition.

“Yes, you've got an opponent -- you're playing, for example, Canada today -- but it's not really about them,” she said. “It's about what we bring, what we do, and as long as we do and execute our game-plan, we should be successful. And then if we're not, that's either because we weren't motivated enough or we didn't give it all we had or we weren't sharp enough."

“The standard is what you want it to be, and my standard is extremely high ... and I know the team feels that way as well.”