Here’s something to classify alongside flying pigs and maybe a Unicorn grazing in your garden: one of soccer’s richest clubs being severely punished by the sport itself. I don’t mean punished by FIFA -- maybe that’s a bit too much to hope for -- but here we have the No. 2 soccer organizing body, UEFA, which rules over Europe, telling Manchester City that they’re banned from the Champions league for two years, and must cough up a fine of 30 million Euros (about $32 million). 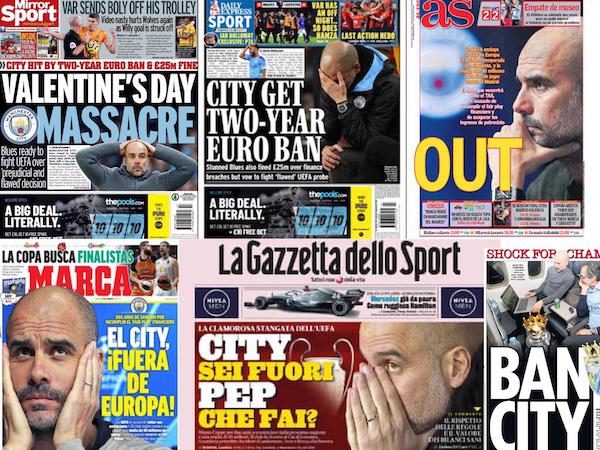 Just what has Man City been up to that they warrant such draconian treatment? Well now, this is not anything that happened on the field -- no bribing of referees nor, so to speak, stealing of signs. This one is all about money. And readers of this column will not be at all surprised to hear -- I’m confident I can believe that -- that the money is sponsorship money.

Here’s the background -- which, frankly, I find far from common-sensical. But it concerns finances, knowledge of which -- I have been told -- is not one of my strengths. Some years ago UEFA and others in the sport became alarmed at the way rich --

Next came the Abu Dhabi group, with Sheik Mansour (whose net worth is reportedly $30 billion) at its head. In 2008 it took over at ManCity and made Abramovich’s spending appear small-time. In no time Man City became the most powerful team in England. Until then, in its 100-plus year history it had only won the English title twice -- the last time 1968. Under Mansour, Man City took the title in 2012, 2013 and 2014, and again in 2018 and 2019.

By that time UEFA, no doubt alarmed and shamed by the financial scandals besetting FIFA, had introduced its Financial Fair Play (FFP) regulations. Basically designed to limit spending by super-rich owners.

Basically, the idea was to stop clubs overspending and piling up big debts. FFP required clubs to file financial reports showing that their spending and their income are in balance, or that the club’s debt is within certain limits. Clubs are required to balance soccer expenditure (transfers, wages, stadiums, training facilities etc) with television and ticket income, plus revenues raised by their marketing activities.

It didn’t take take long for miscreants to be found. Nine clubs -- including Man City and Paris Saint-Germain -- were deemed to be non-compliant. Man City was fined $58 million ($38 million suspended).

Now Man City is in trouble again, only more so, accused of "overstating its sponsorship revenue in its accounts" -- which means fiddling the books to adhere to the income/expense balance required by UEFA. Man City is also guilty, according to UEFA, of not cooperating in the investigation.

Suspension from the Champions League, the sport’s huge money-spinner, is a serious blow. The ramifications might well be as serious as having ManCity’s top players seeking to leave the club, alarmed at being unable to strut their stuff in Champions League play - not to mention a dodgy situation over wage increases. And it is not to be imagined that other clubs will be reluctant to entice ManCity players away.

Man City’s punishment also makes the future of coach Pep Guardiola rather murky. The one title that has escaped him since his arrival at Man City in 2016 is the Champions League. He might win it this year -- the club is still in the tournament. If that doesn’t happen, he will have to wait until 2023 ... and how many top players will he have at the club by then? So Guardiola may also choose to leave. Guardiola says, rather coyly, that he will remain at Man City “as long as he is happy.” The lawyers will tell us, of course, whether his contract, and those of the players, are valid with a club that he been found guilty of serious financial misconduct.

Of course, I’m speculating. Man City will not take this lying down and have let it be known that they are pretty disgusted with the whole quasi-legal approach of UEFA. Quasi-legal because the real Law is not involved. The accusation, the trial, the verdict and the punishment have all been controlled by UEFA’s Club Financial Control Body (CFCB).

Man City will appeal to the Court of Arbitration for Sport (CAS). In lawyerly wordage, that comes out like this: “The club has always anticipated the ultimate need to seek out an independent body and process to impartially consider the comprehensive body of irrefutable evidence in support of its position.”

I suppose this will sound cynical, but it is also quite likely to happen. That 2-year ban already sounds excessive. Is it merely a bargaining position? Will UEFA be satisfied with a one-year ban? I guess we can hand this one over to the lawyers.

But that still leaves an unmentioned -- so far -- issue. The Abu Dhabi group also owns New York City FC. One is left wondering whether Man City’s FFP entanglement will have any ripple effects up in the Bronx.