Last week Manchester City fell foul of UEFA's suddenly strict interpretation of its own rules and was banned from the Champions League for two years. Further west in Germany, Jurgen Klinsmann  resigned as coach of Hertha Berlin after just 11 weeks, thwarting for now its new investor’s plans to make Hertha a "big city club."


Both cases highlight the unhealthy stranglehold that the Champions League has on top level soccer in Europe.

In soccer as in society, establishing yourself as one of the wealthy elite requires a certain amount of skill, intelligence, character and strategy, but mainly huge amounts of cash coupled with contempt for the law and everyone else too. Manchester City and Paris Saint-Germain have elbowed their way to permanent seats at soccer's exclusive Champions League buffet thanks to heavy financial backing from Abu Dhabi and Qatar, respectively. Both were landed with heavy cash penalties from UEFA for infringing its rules on Financial Fair Play (FFP), but what's a speeding fine to someone who drives a Porsche? You have to take the driver's license and keys away, and that is what UEFA has finally done in City's case thanks to the club's cavalier engagement with the truth, and its arrogant, combative approach to being investigated.

Once you slip out of the UEFA Champions League elite, it's very tough to find your way back in. Even spending tons of money might not be an option, because the best players will choose teams who have already qualified for the UCL. Ask AC Milan and Manchester United, former winners whose participation was factored in as a given by the club accountants until they carelessly lost form on the field of play. For Hertha, as a mid-standings Bundesliga club with very little pedigree in European competition, the statement of ambitious intent to join the UCL elite leaves them open to both mockery and failure. With or without Klinsmann.

Even with Germany's supposedly more egalitarian structure preventing a single investor from taking over a club (circumvented by Red Bull in nouveau riche Leipzig, and by grandfathered corporations such as Bayer in Leverkusen and Volkswagen in Wolfsburg), the Champions League has still created a financial imbalance that makes the Bundesliga far more predictable than its marketing department would have you believe. While Bayern Munich has won the last seven titles, big-spending Borussia Dortmund and the corporate-backed Leipzig hold a firm grip on two of the other three available UCL spots. That realistically leaves one more UCL place up for grabs every season. 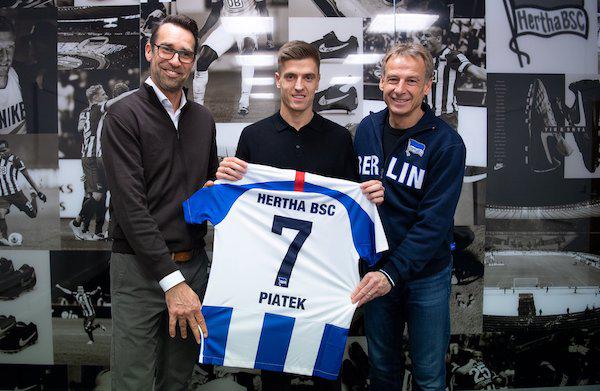 Hertha's investor Lars Windhorst has taken the maximum stake allowed in the club, 49 percent, and has so far put in around $270 million, with more promised. Klinsmann, the West Coast-influenced visionary, was supposed to be the soccer genius who would turn the investment into success (tellingly, Windhorst admits to knowing nothing about soccer). In the winter break alone the former U.S. national team coach spent around a third of that money on new players. Then last week he quit without warning, citing nothing more than mild displeasure at the communication skills of team general manager Michael Preetz.

Only a cynic would venture that after just nine games on the sideline, even Klinsmann realized that he's a tactically clueless poser and a mediocre man-manager who's going to get found out sooner or later -- as was the case first at Bayern Munich, and then with the USA. There's a time limit on how long positive smiles, guru-think, and backroom staff with glorified titles like Performance Manager will allow you to bluff your way through in the face of poor results.

The club could of course still succeed in eventually buying its way into the elite. The case of Hertha illustrates, though, how cash-dependent sporting success has become, and how long, troublesome and expensive is the road to lucrative midweek games against Real and Barcelona. Even the much-cited 'exceptional' rise of Leicester City in 2016 was achieved on the back of a significant investment in the roster by the club's owners. A doughty squad of youngsters coming through a club's academy to win trophies must now be confined to the dreamy pens of Hollywood scribes. The market just doesn't have the patience for that kind of development any more.

There's been no outward display of triumph from City's competitors, doubtless all too aware of how hypocritical that would look, and worried that the investigators could at any time knock on the door to their perpetual Champions League executive suites. Manchester City's ban won't level any playing fields for the majority of Europe's professional clubs, and it will barely oil the aspirations of wannabe up-market teams like Hertha. It does, however, signify that UEFA is at last taking its own rules seriously, and it should prompt the elite to keep its house in order. It's not a fix to money's all-consuming domination of European soccer, but it's a start worthy of a tentative welcome.