Dan Courtemanche was part of MLS's original staff ahead of its launch in 1996. The league's Executive Vice President/Communications, Courtemanche serves as the league's primary spokesman, oversees media relations, and has managed marketing, website, social media, creative and club services groups. We spoke with Courtemanche on the eve of MLS kicking off its 25th anniversary season. 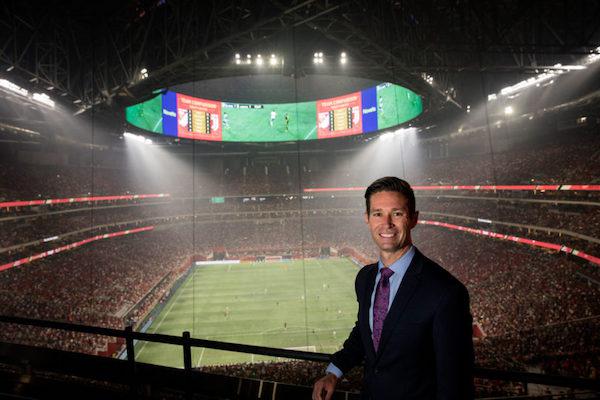 SOCCER AMERICA: If you went to career day at an elementary school, how would you describe your job?

DAN COURTEMANCHE: Actually, I regularly try and explain my job to my son and his friends in third grade here in New York City. I tell them I have the pleasure of working on the business side of professional sports, working with athletes, owners and a lot of really smart people to grow the popularity of Major League Soccer and our clubs. I’ve introduced my son and his friends to a few MLS players and select journalists. They think the best part of my job is that I am able to attend many MLS matches … and I often take my son and his friends with me.

SA: What was special about soccer that drew you to it and made you pursue a career in it?

DAN COURTEMANCHE: I thought there was a tremendous opportunity for growth in professional soccer early in my career.  I’m dating myself, but I worked at a boutique sports marketing agency in the early 90’s and we had a few soccer properties as clients. That led to a role with the Continental Indoor Soccer and ultimately I joined MLS five months prior to the league’s inaugural season.  I had played soccer growing up and saw the changing demographics in our country and felt there was real potential for growth. 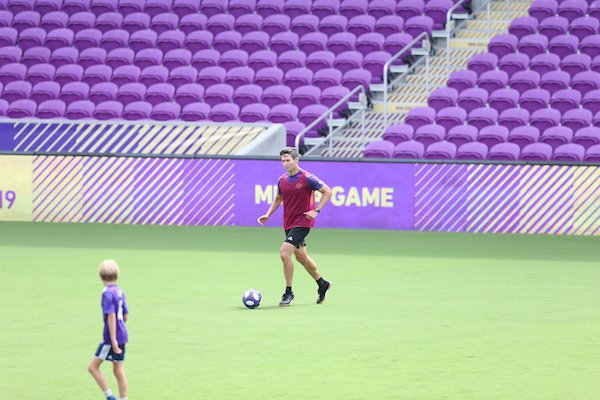 Dan Courtemanche gets some field time with his 8-year-old son, Luc, in Orlando in 2019.

SA: How close does MLS upon its 25th anniversary resemble what you may have imagined if you predicted the future in 1996?

DAN COURTEMANCHE: When I started at MLS in late 1995, we had 30 employees and 10 clubs. Fast forward to our 25th season and we have nearly 350 employees in our New York office and soon we’ll have 30 teams. It’s night and day compared to 1996, and you could arguably say that MLS is not the same league it was even five years ago. It’s a credit to our owners for their vision, our clubs for building the sport, and our passionate fans for creating a soccer culture in the United States and Canada.

SA: What are you most pleased about the current state of MLS?

DAN COURTEMANCHE: It’s hard to pinpoint one specific item or topic. Seeing world-class players on the field competing in incredible stadiums on the field every week is incredible, but it really is the overall growth and soccer culture that our fans and clubs have created that is the most rewarding part of working at MLS. I remember taking my son to a Timbers game a couple of years ago and he said to me, “Dad, it’s too loud.” And that was 60 minutes before kickoff!

SA: What's a priority for improvement?

DAN COURTEMANCHE: Increasing the size of MLS’s fan base and deepening the engagement of our current fan base are arguably the top priorities. Every year more and more fans are attending MLS matches, watching games in television, engaging with our players and clubs on social media, and purchasing MLS merchandise. As our fan base continues to grow, our owners continue to make significant investments into building their clubs and the sport in the U.S. and Canada.

SA: How has your role at MLS evolved over the 25 years?

DAN COURTEMANCHE: While overseeing the communications group has always been the priority, at times I’ve managed our marketing, website, social media, creative and club services groups. We’re fortunate that we have many talented people at the league office and our clubs, and I have touchpoints with all of those areas and other groups such as broadcasting. In addition, I’m also involved with our Soccer United Marketing properties and clients.

SA: How different is the MLS office now from 1996 and the early years?

DAN COURTEMANCHE: First, the MLS office is 10 times as large as it was in 1996, and the sophistication of the sports business is very different than it was in the mid-1990s.  We’re fortunate to have deeper resources that have directly impacted the entire league. A great example of how increased resources can impact our business is the MLS Insights and Analytics group that provides strategic recommendations that have significantly impacted the league. This group led an extensive fan research study a few years ago that led to decisions in our overall marketing strategy and strong recommendations in player strategy.

Our fans told us via research they wanted to see young, dynamic players on the field and those insights led to a wave of new players such as Josef Martinez, Diego Rossi and Cristian Pavón. When MLS first started, we rarely had any fan research and insights. 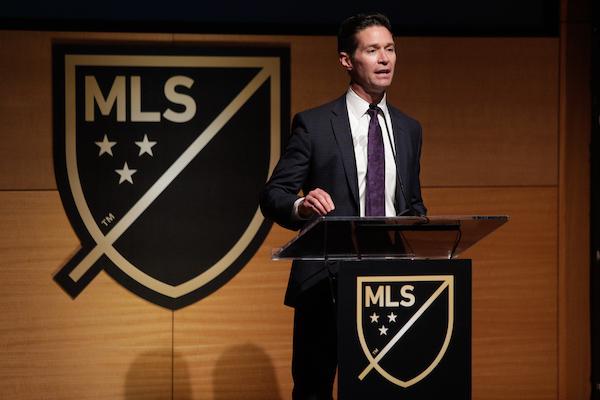 SA: How much work do you do with teams on their communication strategies?

DAN COURTEMANCHE: We work closely with our clubs in all areas of the marketing mix, especially in communications. I’m fortunate to have multiple people in my group with MLS club experience – talented people like Lauren Hayes, Molly Dreska, Rick Lawes and Gabe Gabor. We also have other members of our communications team with experience in the NFL, NBA, NHL and MLB.  While our clubs are fierce competitors in the field, they share many best practices on the business side. Our communications team regularly facilitates those best practices.

SA: Was there ever a point when you worried that MLS might not survive?

DAN COURTEMANCHE: In 2000 and 2001, there was a significant concern that MLS might fold, but ultimately Phil Anschutz, the Hunt family and the Kraft family believed in the league and the plan that Commissioner Don Garber had created to grow the overall popularity of the league. We’re extremely fortunate these original owners were passionate about building Major League Soccer.

SA: What were the biggest challenges getting media attention for MLS in the early years?

SA: The biggest advances in U.S. media coverage for MLS over the years?

DAN COURTEMANCHE: From a traditional media standpoint, it’s arguably the proliferation of content online and how people consume their news and information. We used to joke in the late 90’s that the internet served as “talk radio” for MLS and our clubs. Now, there are dozens of outlets producing content on a wide variety of platforms, and most of our fans are consuming their news and information via their smartphones.

I joke that my 8-year-old son does not know the difference between ESPN, ESPN2 and ESPN+ as it’s all the same to him, and he just pushes a button on our smart TV that takes him to the channel or app to watch his favorite programs. In addition, social media has been a game-changer for MLS as it provides a direct way to connect with consumers.

SA: How has social media affected your job and the league? Positives and negatives?

DAN COURTEMANCHE: Social media has played a prominent role in increasing the overall popularity of MLS and our clubs. Tens of millions of people follow MLS and our clubs on social media, and we have an owner with more than 60 million Instagram followers. It’s a terrific way to connect directly with fans, and we are fortunate that we have an award-winning social media content team at MLS and many talented individuals with our clubs.

We also closely monitor the volume and sentiment of traditional media and social media, and those insights help us make decisions. While there are a few negatives such as tracking down incorrect posts that spread rumors, the positives far outweigh the negatives.

SA: How important is international's media coverage of MLS and how do you assess the media coverage MLS gets abroad? In what countries is there the most interest in MLS?

DAN COURTEMANCHE: With players who were born in 75 different countries and many global stars playing in MLS, there is significant interest in the league, our clubs and players. MLS matches are televised in 190 different countries and territories. We have a group that monitors domestic and international media coverage and provides data and insights.

With Javier Hernandez and 10 players from Liga MX recently signing with MLS clubs, there is massive interest from Mexico.  And we also have dozens of Argentines in MLS, which has resulted in terrific coverage in South America.  Of course, interest from the UK has increased significantly with David Beckham returning to MLS as part of Inter Miami CF’s ownership group. 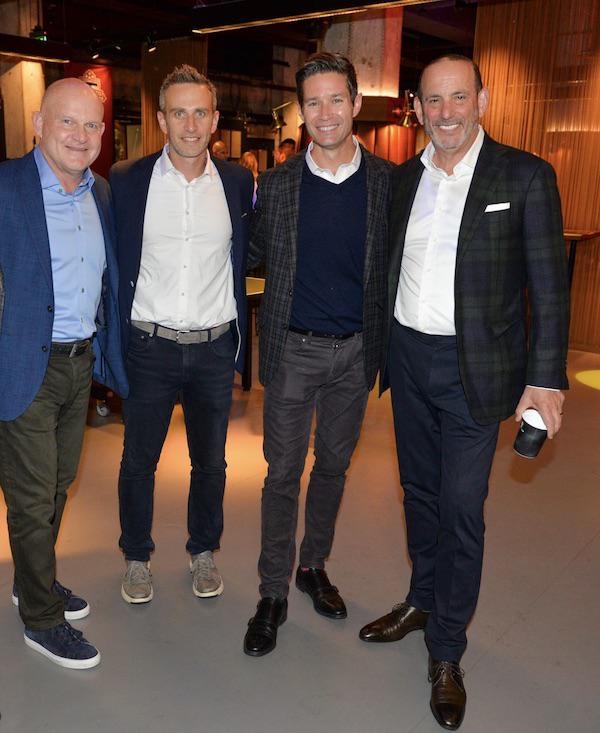 SA: Can you share some of your memorable MLS experiences?

DAN COURTEMANCHE: There are countless memories that stand out throughout the years, including the inaugural game in San Jose, the first match at Crew Stadium, more than 73,000 fans at MLS Cup 2018 in Atlanta, etc. I’ve been very fortunate to have been a part of some iconic moments throughout MLS history.

One of the moments I still laugh about occurred in July of 1999 when I attended a going-away party for a friend who was leaving the NFL. One of the individuals I met at the party was asking me a lot of questions about MLS. I thought to myself, “He’s just interested as he is marketing American football to a global audience.” Little did I know at he time that Don Garber would become my boss a few weeks later!