Two years on from Save The Crew: a rebirth for Columbus

Sometimes it’s easy to forget how close a founding member of MLS was from losing its soccer team. For months after then-owner Anthony Precourt’s announcement in the fall of 2017, the Columbus Crew’s existence hung in the balance. 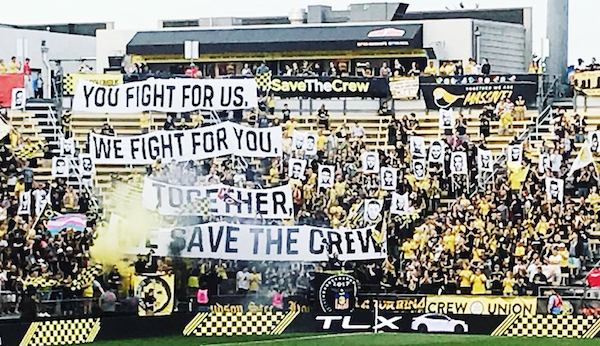 Made up entirely of Crew fans, the #SaveTheCrew coalition battled against that venture capitalist from San Francisco, who was angling to move the Crew to Austin — an escape hatch he had written into his contract with MLS from the get-go.

Thanks to what some regard as the most successful grassroots campaign in American sports, the Crew stayed, Precourt left and the new ownership group, the Haslam family and Pete Edwards, took over. But that doesn’t mean things are back to normal in The Arch City, and the Save The Crew project hasn’t evanesced into a simple chapter of the Crew’s history. Two years on, the movement still drives their identity and growth: they’re not forgetting about their team’s brush with fate anytime soon.

“It's one of those things where three years ago, we called our shot,” Morgan Hughes, the frontman of the movement, said on Friday via phone. “We told everyone exactly what was going to happen. It's a puffing chest moment, man. You know?”

On the eve of its 25th season, Columbus has gone from a market bemoaned for its poor business metrics and dilapidated fan base to a franchise with a downtown stadium planned to open in 2021, a new jersey sponsor, and a renovated squad that has the quality for a deep playoff run. I spoke with Morgan as Columbus was wrapping up its Black and Gold week, an annual preseason tradition. It kicked off with the NHL Blue Jackets hosting a Crew fan night on Monday, and throughout the week, youth players attended free soccer clinics. Fans flocked to events all over the city, such as the Downtown Stadium Experience Center that offers Crew fans an inside look into the Arena District that is planned to open in the summer of 2021. 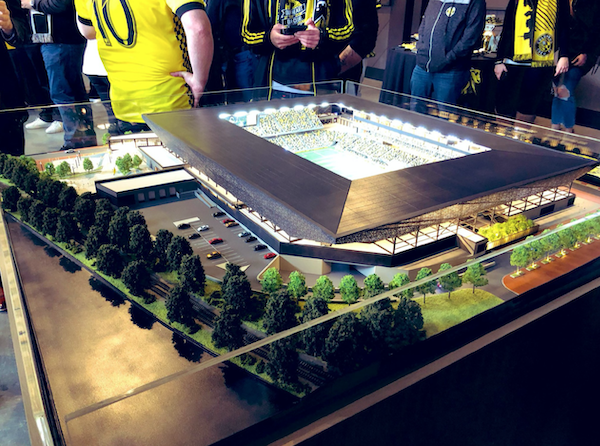 Crew fans admire a rendering for the team’s new stadium.

“The city and the Crew are more connected than they have been in the past,” Hughes said. “It was always fun. This is just a new era, it's a city-wide thing.”

Good news accompanied the week too. The Crew’s new training facility and jersey sponsors, Ohio Health and Nationwide Children’s Hospital, penned a deal worth $18-20 million over six years that’s more than double the value of its last sponsorship deal with Acura and twice as long.

The week was a far cry from the Precourt era, when fans were told its community wasn’t supporting their team.

“Our whole goal with Save The Crew was to destroy [Precourt and MLS’] false narrative and shine a light on how great this city is, and more importantly, can be with the right ownership and leadership in place,” Hughes said.

Crucial to the oft-mentioned business metrics are the team’s new leadership. Steve Lyons, a veteran business leader in Columbus, begins his first full season with the Crew as the Chief Business Officer.

“He has connections with every power player in town,” says Hughes. “The people working for us are Columbus people. They're able to talk to people in town here as one of their own.”

It was always going to be difficult for Precourt and his team to develop business relations with a city that he seldom visited. I asked Hughes if Precourt ever sought to implement some sort of local ownership in the franchise’s corporate structure.

“I don't know if he was interested or not, but he didn't.”

The team on the field is changing too; after Wil Trapp and Federico Higuain left in the offseason, the Crew’s ownership splashed for Lucas Zelarayan, the Argentinian midfielder who left Mexico’s winningest team, Tigres UANL, this winter. Zelarayan is more expensive than the combined value of all of the Crew's transfer fees of all time.

Playing alongside Zelarayan is Darlington Nagbe, who has a relationship with coach Caleb Porter dating back to their days together at Akron — the duo also won an MLS cup in Portland in 2015.

Photo courtesy of the Columbus Crew

“People say we loved Gregg Berhalter a lot for a coach who didn't win any trophies,” Morgan said. “But we liked Gregg because he was trying to make chicken salad out of chicken shit. Now, there is very clearly a statement coming from our ownership that says, 'the checkbook is open.’” If this all sounds like a team’s total transformation, don’t tell that to Hughes. “The true rebirth of the Columbus Crew is yet to come,” Hughes says. “That moment is going to be in the summer of 2021, when that whistle is blown in the new downtown stadium that's been in all of our dreams in the last 26 years. That’s going to plant a flag in the ground that says, 'this is now and forever more, Columbus as a soccer city.”

Like for anyone I interview I asked Morgan if he had anything else to say to Soccer America’s readership. His reply? “Sleep on us at your own risk.”