The USA, which never looked sharp against weak, bunkering foes during Olympic qualifying earlier in the year, thrived against an England team whose bolder approach gave the Americans more space. The U.S. midfield's dominance over England increased after Christian Press' golazo gave the USA the deserved lead in the second half, followed quickly by Carli Lloyd's strike. 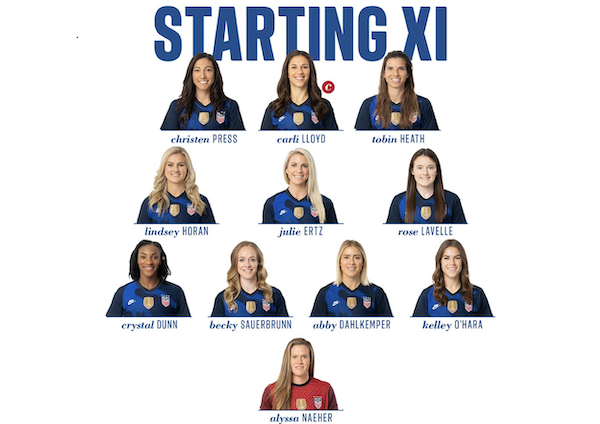 Alyssa Naeher reacted slow to a corner kick that Jill Scott skied over the crossbar from inside the goal area in the first half, but did well to clear the two corner kicks that threatened in the second half. Naeher also prevented Nikita Parris from converting England's best second-half chance.

Outside backs Crystal Dunn and Kelley O'Hara stifled England's wing play. O'Hara did better going forward than Dunn, who needs to get more creative than launching hopeful crosses. Abby Dahlkemper was always well positioned to interfere in attacks. Becky Sauerbrunn had on off day, resorting to a foul in the 25th minute, passing out of bounds in the 33rd minute despite no pressure, and losing Parris in the 57th minute.

Julie Ertz's sliding interception started the sequence that led to the USA's first goal. Rose Lavelle sparked U.S. attacks in the first half, but faded in the second half before leaving in the 70th minute. Lindsey Horan took charge of orchestrating in the second half. Horan's assist to Carli Lloyd with a wonderfully scooped pass displayed her creative side. Her ferocity appeared when she thumped Georgia Stanway in midfield in what must have been revenge for Stanway tugging Tobin Heath's ponytail earlier in the game. Neither action drew a yellow card from inexplicably lenient referee Odette Hamilton.

The fantastic curving strike from 23 yards in the far corner of the net made it goals in seven straight games for Christen Press. She also fed Horan before the second goal. Although Carli Lloyd squandered a pair of first-half chances, her chasing down of defenders contributed to the U.S. dominance and she passed well, such as the crisp strike, after a swift pivot, to Press on the goal. And Lloyd did finish well after Horan set her up. Tobin Heath attracted a crowd of English on her first foray, and honed her delivery after a few misplays, setting up a Lloyd chance and helping the U.S. keep possession in England's half.

Of the subs, Samantha Mewis helped most to make the latter part of the game a massive struggle for the English. Megan Rapinoe darted down the middle and fed Heath seven minutes after coming on, but stood out for a horrendously high free kick from prime scoring position and blasting far off target from 18 yards.