Lionel Messi, without any shadow of doubt, is one of the all-time greatest players among the millions who have ever played this game of soccer.

An absolute gem, brilliantly sparkling with soccer skills, a joy to watch -- an enormous credit to the sport. But does soccer appreciate what it has, what Messi means -- in terms of the sport’s image?

On the whole, I’d say yes. The list of his personal trophies is extraordinary -- his repeated winning of FIFA’s player of the year award (six times since 2009), the eight seasonal awards given to him by Spain’s LaLiga for being its best player, are part of a huge list. This year, Messi won the Laureus World Sports Award for Sportsman of the Year -- for awarded to "the sportsman who best demonstrates supreme athletic performance and achievement."

Yet amid all these hurrahs, the sport of soccer manages to introduce a sour note. Just a few days ago, Messi -- playing in a UEFA Champions League game against Napoli -- was given a yellow card by German referee Felix Brych.

A yellow card for a challenge that Brych presumably considered reckless, that showed “disregard to the danger to, or consequences for, an opponent.” Well of course, one balks at that ... I mean, Messi a dirty player?

You would be 100% right to question this call. It was blatantly wrong. The culprit, though, is not referee Brych. Nor is it the rules themselves. The guilty party here is “accepted practice” -- the tradition that insists that referees ignore goalkeeper fouls.

Here’s what happened. We’re at the 63rd minute in the Napoli-Barcelona game, with the score at 1-1. Barcelona is attacking. Arturo Vidal, strangely unmarked, has the ball inside the Napoli penalty area, to the right of the goal, just three yards in from the goal line. He slides the ball across, parallel to the goal line, as Messi accelerates to meet it, and Napoli goalkeeper David Ospina dives to his right, stretching out his right arm, trying to deflect the ball.

By any reasonable assessment this is a 50-50 ball -- meaning that both Ospina and Messi have a right to go for it. In fact, Messi appears to be the favorite as he slides in. But he fails to make contact with the ball and Ospina, with a prodigious stretch just gets his hand on the ball first.

The inevitable collision between Messi and Ospina, both of them on the ground, looks very nasty. Did Messi’s cleats slide into Ospina’s face? Fortunately, no. They made contact with Ospina’s right shoulder. Fortunately again, Messi’s slide was not a violent one, so the contact was not heavy. Referee Brych administers the yellow. Players gather around the fallen pair. No one appears to be too upset. Ospina is soon on his feet, moving his arm. Messi appears to be sympathizing with Ospina, then offers a mild protest to the referee. Napoli captain Lorenzo Insigne, with a huge smile on his face, says something to Messi. After a delay of two and a half minutes, Ospina has recovered, he and Messi hug briefly, and the game restarts.

Evidently an amiable incident. No damage done. But there might have been a serious injury. At one point, as Ospina and Messi slid into each other, Ospina’s flailing left leg brought his cleats within inches of scraping across Messi’s face.

The sight of a player sliding toward the ball while the opposing goalkeeper is simultaneously diving head-first for the ball -- that’s not a healthy situation.

Why then, is it permitted? Well, you can say, it’s not permitted and the caution to Messi proves it. Except that Messi, in trying to play the ball has done nothing wrong, has done nothing that all soccer players do, probably at least once every game -- contest a 50-50 ball.

The player who has committed an obvious offense here is goalkeeper Ospina. The guy who came off worse, with a bruised shoulder. But that, though inviting our sympathy, gets no sympathy from soccer’s rules. This is what they say -- Rule 12 page 106, talks of a player who “while trying to play the ball, threatens injury to someone (including the player themself) . . .” That is part of the definition of “Playing in a dangerous manner.”

And that, I submit, is exactly what goalkeepers are doing every time they dive to the ground at an opponent’s feet. I don’t feel any need to argue the point -- it is so glaringly obvious. As soon as the dive -- head first (if not that, then hands first, but the head is close behind, near ground level) -- begins and the goalkeeper starts to go to ground, the referee should whistle for dangerous play -- by the goalkeeper.

The goalkeeper is clearly contravening one of soccer’s rules. The referee is ignoring the offense. Worse, much worse, comes when the referee decides, as did Brych in the Messi-Ospina incident, to punish the innocent party -- which he did by yellow-carding Messi.

But Brych was only doing what, it is safe to say, most referees would do. They are wrong, condemned by their own rules.

This ongoing confusion over just what a goalkeeper can and cannot do was on view in another recent incident during the first half of the English Premier League game between Leicester City and Manchester City.

Leicester City forward Kelechi Iheanacho chased a high ball into the Man City penalty area. Man City goalkeeper Ederson decided he could get to the ball and came racing out of his goal. Iheanacho appeared (more about that in a moment) to get to the ball first, but he was immediately flattened by a violent collision with the onrushing Ederson. The ball went over the goal line, and referee Paul Tierney immediately signaled for a corner kick.

Meaning that he believed that Iheanacho had headed the ball toward goal, but that it had been deflected by Ederson’s hands. Whether Tierney got that right is really irrelevant. For he was ignoring the violent play of Ederson, who -- to get even the slightest touch of the ball -- needed to hurl himself, at full speed, into Iheanacho.

Replays showed that Ederson’s hands and his head made solid contact with Iheanacho’s head, sending him to the ground and necessitating a three-minute delay as he was treated for a head injury.

(As a sad aside, Iheanacho should surely have been assessed for concussion. But was he? He was back in the game after only 3 minutes -- quite possibly the Leicester medical staff have set a world-record time for administering the much-vaunted “concussion protocol”). 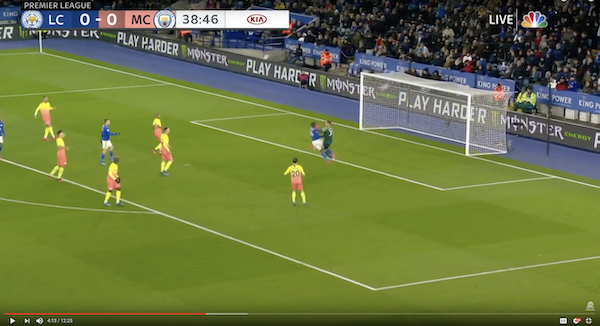 TV commentator Graeme Le Saux, watching a replay: “Oh, that’s a penalty, you can’t protect the goalkeeper or give him special status in that situation ... that’s a terrible challenge.”

Yet, the replays were inconclusive. Referee Tierney’s version (a corner kick) was possible, but it was also possible that Ederson had punched the ball onto Iheanacho’s head (which would mean a goal kick).

But it doesn’t really matter which version is correct, because referee Tierney is getting it wrong anyway -- by ignoring the violence of Ederson’s challenge. That is the foul that should have been called, a clearly reckless and dangerous challenge by the goalkeeper, hence a penalty kick to Leicester.

But once again, as in the Messi/Ospina clash, soccer ignores its own rules and tradition dictates that the call will not go against the goalkeeper.

I am greatly puzzled by the attitude of the goalkeeper union toward this. I would have thought they would have found their freedom to maim fellow professionals embarrassing, and a worrisome cross to bear. Apparently not -- for not a word is heard from them.

Whatever, there is some serious work here for IFAB, involving an intricate revision of the rules: To make sure that goalkeepers play soccer according to the same rules that all the other players are required to obey and to ensure the safety of those who play this sport. Soccer may also be interested in avoiding the embarrassment of wrongly convicting players -- I mean any player, not just Lionel Messi -- of reckless play.