Spain matched the USA in shots and dominated possession, but with three minutes left, after a foolish Maria Leon foul on Lynn Williams, Christen Press curved in a free kick that Julie Ertz headed into the net from close range for a 1-0 win in the SheBelieves Cup on Sunday in New Jersey. 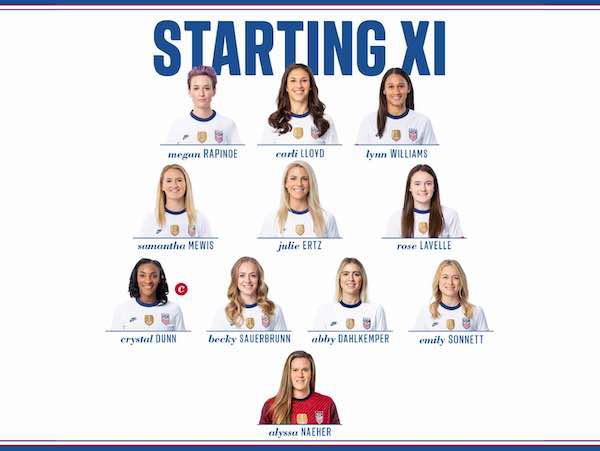 Alyssa Naeher's three saves were all shots straight to her, demonstrating the Spaniards' biggest weakness: finishing.

Left back Crystal Dunn keeps ending her attacks with unproductive crosses. She gifted Spain a corner kick in the 57th minute and allowed a close-range shot from No. 9 Cardona in the 69th minute. Right back Emily Sonnett's midfield giveaway enabled a Spain counterattack in the second half as the USA struggled to find momentum. But both outside backs prevented threatening wing play from Spain. Central defender Abby Dahkemper's long passes launched some attacks and she helped limit Spain to long-range shots along with her central partner Becky Sauerbrunn, who rebounded from her subpar performance in Wednesday's 2-0 win over England. Sauerbrunn blocked a shot and intervened in several Spanish attacks.

Spain outplayed the U.S. midfield for much of the game, demonstrating the value of accurate passing while keeping possession for 60 percent of the game. Defensive midfielder Julie Ertz darted forward twice in the first half for counterattacks that fizzled with poor touches from Megan Rapinoe and Carli Lloyd. Ertz herself wasn't immune to faulty passing, but she helped prevent the Spanish from translating midfield possession into frontline chances, and she headed home the gamewinner to avoid the first U.S. shutout since 2017. Samantha Mewis's 60th-minute shot required a big save from goalkeeper Sandra Panos, who otherwise faced few tests aside from high balls from the flanks and corner kicks. Rose Lavelle's promising moves early and late in the game sandwiched a long lull in which she hardly contributed.

Megan Rapinoe, an unrecognizable FIFA Player of the Year, needs to stop taking free kicks, which she's been wasting with major inaccuracy for the USA, and improve her passing. One of her corner kicks didn't reach the goal area. She escaped a yellow card when her most emphatic action of the day was blasting the ball out of bounds before a Spain free kick. Rapinoe's feed to Carli Lloyd, who shot weakly to the keeper, in the 43rd minute was the only highlight for Rapinoe. Lynn Williams blazed though Spain's defense in the 47th minute only to send her pass to a Spaniard. She got fouled for the free kick that led to the goal. The ineffective Lloyd and Rapinoe exited in the 67th minute.

Christen Press' 77th-minute foray on the left wing came when the USA needed a spark but it ended with a bad pass. She delivered a fine in-swinging free kick that Julie Ertz nodded in the net. Press deftly scooped a pass to Williams on the sequence before the free kick.

TRIVIA: Twelve of the USA's 50 goals in its last 14 games have been headers.