Please spare us from games behind closed doors

If the government ordered that a Taylor Swift  concert was shut to the public due to health concerns, would the singer still go ahead with the performance? It seems unlikely, even if she streamed the concert free so that disappointed ticket-holders could watch her strut and sing in a deserted arena. The point of a concert is obviously that people get to experience the music live -- the singing along, seeing the artistes in the flesh, and the shared feeling of joy with the fans around you. In what way, then, is Juventus any different to Taylor Swift? 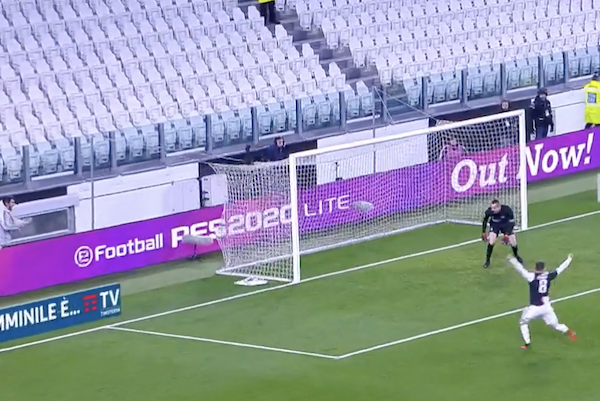 Watching a feed of Juventus vs. Inter Milan in an empty stadium at the weekend seemed to bring home the inherent pointlessness of sport. Namely, it's only the presence of the fans that really give our games any purpose at all. Take out the supporters and, as the commentators pointed out, you're left with nothing but a training ground scrimmage. Upping the sensitivity of the boom mikes to make every touch of the ball sound like a dramatic collision only served to highlight the surrounding echo and emptiness.

Although the game itself seemed to suffer no loss of quality, the commentators lapsed into musing about the space around them, talking right through a long range shot from Inter's Marcelo Brozovic that prompted a fine save from Wojciech Szczesny. They reported that although the venue was empty, there was plenty of noise coming from the two benches. Ah, so that explained the low-level hysteria -- there was me thinking they'd miked up the stadium daycare.

Meanwhile, the instructions from the benches were "nothing really revealing" -- mainly the players being told to react quicker and run faster. So all that gesticulating, hollering, and jumping up and down from the coaches that you thought was communicating nuances of sophisticated tactical nous, was just the Serie A variation on what the clipboard-wielding U-9 rec team team dad in his chinos, sandals and white socks does every Saturday morning to pump up Logan, Bradley and Chuck Junior.

Sleepy and indifferent, I switched over at halftime (score: 0-0) to Real Betis against Real Madrid in LaLiga, where fans are not yet barred. Shortly after, the Brazilian Sidnei put Betis ahead with a plosive strike. A slow motion replay showed the team jumping on the surrounding fence to celebrate with the home fans, whose expressions of disbelief and ecstasy (Such a goal! Against such an opponent! And we were here to experience it!) summed up why humans invest so much time, cash and energy to attend sporting events. Because, very occasionally, it's actually worth our while, and when it's worth our while then it's really worth our while.

Back at Juve for the second half, where the camera operators did their best not to show us the empty stands, Inter's reserve goalkeeper Daniele Padelli managed to get himself a straight red card for something he yelled from the bench. He walked off with a bemused expression, probably thinking that he screams insults at the referee every week, but no one can usually hear him because of the noise of the crowd. Juve's two goals were followed by close-ups of the players in raptures with the home bench (without the requisite one meter of distance between rejoicing individuals), again concealing the void beyond.

The Italian newspaper Corriere della Sera thought it was right for the games to go ahead behind closed doors in order to help Italians through the current stressed times (even though the games are not available on free-to-air TV). In contrast, the president of the players' union, Damiano Tommasi, demanded that Serie A be canceled, while others have suggested that play be suspended for a month, as in Switzerland. Both courses of action, though, would then raise the question of compensating broadcasters who have paid for television rights, and that's not a topic that league bosses are keen to negotiate.

Playing games behind closed doors is also being discussed in Germany, where panic buying of groceries has not at all been offset by people staying away from soccer stadiums. As in Italy, the Bundesliga wants to stick to the schedule so that domestic play is finished on time. The season "must finish by mid-May" according to league boss Christian Seifert. To what purpose, though, aside from fulfilling contractual obligations? The point of sport is not to fill in a table of statistics before an arbitrary deadline at any cost, it's to provide spectacle and entertainment before an involved public audience.

Delaying or canceling soccer in the days of the coronavirus are not ideal solutions, but they make the most sense. One solution might be for clubs to complete a delayed domestic season in summer, instead of playing weeks of endless cash-yielding warm-up games. Why should the paying spectators be the only ones inconvenienced, deprived and, in some cases (Juventus, for example), uncompensated? No matter who the players are and how many people are watching at home, professional soccer without fans has no more point than Taylor Swift singing "Blank Space" to a blank place.