After wins over England (2-0) and Spain (1-0), the USA beat Japan, 3-1, in Frisco, Texas, to win the 2020 SheBelieves Cup. Japan became the first team to out-shoot the USA (11-7) after 16 games since the USA's 2-1 quarterfinal win over France at the 2019 World Cup. But the Japanese failed to rebound from the first-half golazos by Megan Rapinoe  and Christen Press. A powerful header off a corner kick by Lindsey Horan iced the game the game for the USA. 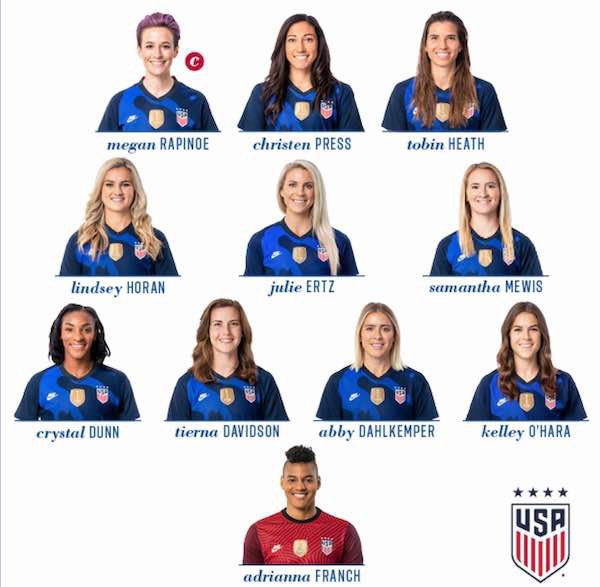 Adrianna Franch played well with her feet on her defenders' back passes when Japan pressed early in the game. She bobbled a 28-yard shot in the 50th minute and was lucky that Narumi Miura's sharp-angle shot hit the post. Franch had no chance on the goal.

Left back Crystal Dunn won her battles with winger Mina Tanaka, but offensively failed to connect her passes before being subbed in the 61st minute. Kelley O’Hara made some good tackles but lost track, because she wandered into the middle, of Emi Nakajima, who assisted on Mana Iwabuchi's goal. Central defender Tierna Davidson can be satisfied with her 45-minute performance in first appearance in five months since suffering an ankle injury. She was replaced by Becky Sauerbrunn at halftime. Abby Dahlkemper was part of the central defense that interfered when the Japanese broke through the midfield and delivered the corner kick on the USA's third goal.

Lindsey Horan was fouled hard for the free kick that gave the USA a 1-0 lead. She missed a tackle on the Japan goal but her fierce defending otherwise and her excellent header for the third U.S. goal made up for that. Samantha Mewis also had a chance to interfere on the buildup to Japan's goal but didn't make an effort. Besides her nicely scooped pass to Horan in the 53rd minute, Mewis failed to trouble the Japanese defense. Julie Ertz defended competently on an evening when the U.S. midfield lacked cohesion. As was the case against Spain, the USA's had inferior possession. Against Japan, the Americans won thanks to a pair of set-play goals and one made possible by goalkeeper Ayaka Yamashita's horrible clearance.

Megan Rapinoe played her best game since the World Cup, scoring on 23-yard free kick and dishing the ball to Christen Press on the second goal after Yamashita's blunder, but Rapinoe sent most of her passes to the Japanese -- she had Tobin Heath wide open for a breakaway in the 35th minute -- before being subbed in the 62nd minute. Press' seventh goal of the year was a brilliant chip over the goalkeeper from 22 yards, but her touches were off the few times she got the ball after her goal and before being replaced in the 71st minute. The goals by Press and Rapinoe, however, highlighted the USA's performance and created the cushion that it needed to beat the Japanese, who played more dynamically until Horan put the game away. Heath, yellow carded for a bad foul on the 50th minute, lost her one-on-ones on the dribble. Her 16th-minute cross went straight to Yamashita.

Becky Sauerbrunn's central defense play was a key the USA holding on to its lead. Young Mallory Pugh lost the ball dribbling in midfield and on a late-game attack, but she should have earned an assist for her pass to a wide open Carli Lloyd, who, while unmarked in front of the goal, shot far wide from nine yards in the 79th minute. Lynn Williams blasted a cross straight into a defender and a minute later over-hit one by 20 yards.

TRIVIA: The USA is now unbeaten in its last 48 homes games -- 43 wins and five ties.