Kids playing on their own: Juggling develops skill and provides fun with the ball

Pele  juggled with a grapefruit or a ball of old rags tied together with string when he didn't have a real soccer ball available. He later reflected that juggling helped him develop control with his left foot, concentration, balance and touch, both gentle and hard. While Rose Lavelle  was helping the USA win the 2019 World Cup, she recalled how backyard play, just her "having fun with the ball," contributed to her current skills and creativity on the field. 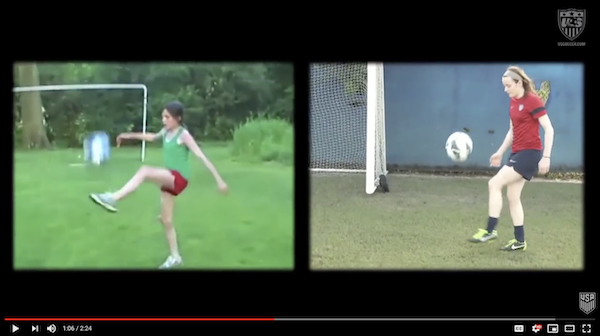 This part of our series about how children can improve their soccer without team play provides video to emulate the stars and variations of juggling for players of all levels.

For beginners -- balloons and beach balls

Juggling is difficult. It requires sophisticated coordination of balance and touch to send the ball on a path convenient for the next touch. With a regular soccer ball, that means missing the ball's relatively small sweet spot sends it too far away for the next contact. One way to encourage beginners to juggle is to have them try with something easy, like a small beach ball or even a balloon. With a regular soccer ball, letting the ball bounce on the floor or grass between touches can be a good entry phase.

One thing that makes juggling fun is to set goals: from 5 to 10, to 20, etc. Reaching those creates a sense of accomplishment, juggling gets more fun, and usually improvement begins to increase exponentially. Parents or coaches offering prizes when certain numbers are reached offer extra motivation. In my childhood, it was running into the house from the backyard with joy to announce I'm due a quarter -- $1.60 in 2020 money -- from dad. Coaching preteens I set a team goal, adding up every player's record to reach a number that promised a post-game ice cream party. Coaches can set up an online doc for kids to take pride in their progress. 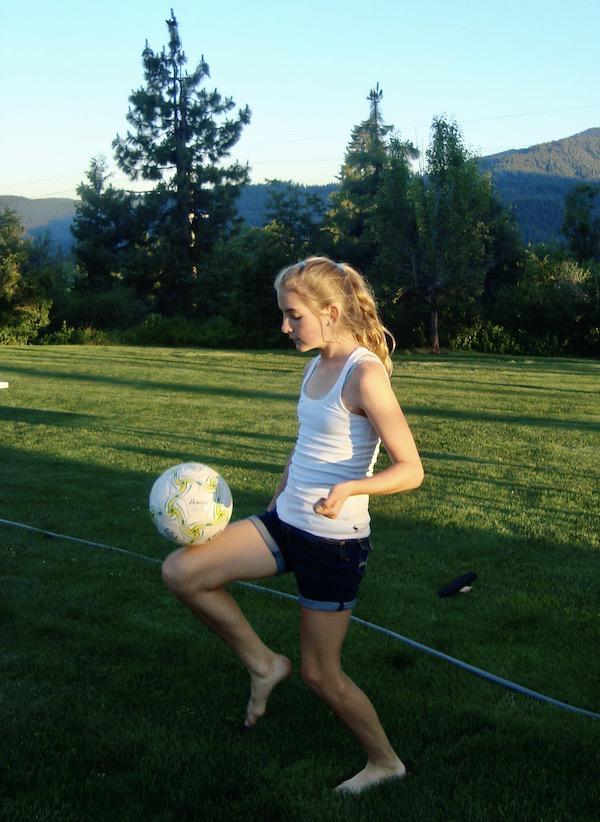 From thigh to foot

I've seen some coaches insist that kids have to begin juggling with no-hands, ball on the ground, but I believe that should depend on the individual skill level. You want the start to be as easy as possible. Such as dropping the ball on the thigh, counting thigh touches, and using the feet when the ball drops down. Or starting by dropping the ball to the foot. As the kids progress, the challenges can be more complex. But starting with thigh juggles can help build confidence.

Once it's obvious the young player is building confidence and enjoying juggling, the challenges can be foot-only counts, or alternating right foot-left foot counts.

But I recommend not interfering much into how the kids approach it. The aim is for them to build a relationship with the ball and find enjoyment on their own terms. There's a video of a 10-year-old Leo Messi juggling 100-plus times only with his left foot and left thigh. He turned into a pretty good player. 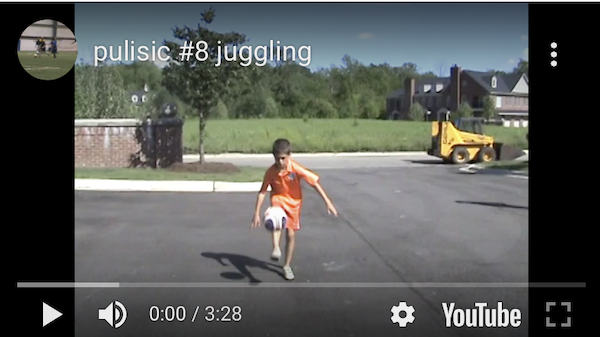 A 9-year-old Christian Pulisic juggling in his driveway.

Coaching players to improve their weaker foot at practice is a difficult task. You can place restrictions during game-like exercises, like shooting with only your weaker foot. But do you want a player to awkwardly adjust for a weak-foot shot when the pass was delivered to the strong foot?  Or take a poor shot during a game with the weak foot rather than take an extra touch for a better shot? Also, young players don't enjoy failing miserably in front of peers or what they perceive, rightfully or not, the judgmental coach who's contemplating the weekend's starting lineup.

The best time for kids to work on their weaker foot is on their own, whether that's passing and shooting against a wall, or juggling. If you can juggle 10 or 20 times with your right foot, try 5 or 10 with your left foot. Alternating feet when you juggle is excellent practice. And even if kids aren't trying to use the weaker foot, juggling naturally challenges them to do so.

With Nerf, Poof-Slinky or others types of soft balls, kids can juggle, or play off the wall, inside the house. Volleyballs can be fun for juggling, and I really like the Coop hydro balls, which are designed for water play. They’re soft enough to juggle indoors with minimal risk of causing damage -- although I don't recall ever interviewing a great player who never broke something in the house -- perfect for barefoot play, and, of course, great to bring to the beach. For advanced players, there's the Hacky Sack, tennis balls.

I don't know the science on how juggling different types of balls may be beneficial, but doing so is something that great players have in common. Even superstar Messi, with unlimited access to soccer balls, can't resist mixing it up. 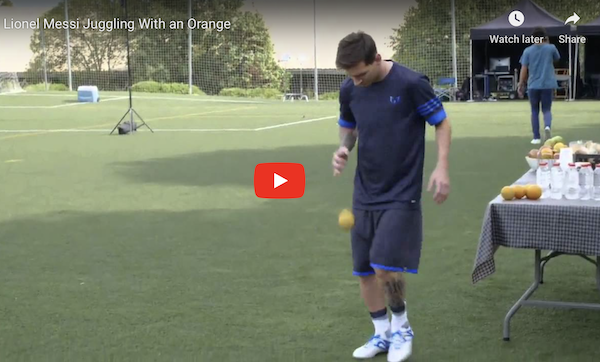 Combine art and soccer by making a paper ball -- with newspaper, or what ever scrap paper is available in the tablet age. The first piece needs to be crumpled up and squeezed tightly, because that's the core. Wrap more sheets around the core and tape a big cross around the orb. Athletic tape is best, but masking tape will work. Add more sheets of paper. Then wrap tape around it until you can't see any of the paper. Kids can use colored markers to decorate the ball. Then can juggle or play against the wall with their custom-made ball, which because of its limited spring can be used indoors.

A young Diego Maradona juggling while dreaming of playing in a World Cup.

"Casual skill sessions don’t have to last for hours. Even 15 minutes a day of juggling or footwork can be a significant addition when compounded over time. ... Try this ultimate challenge. It’s called 720, and here’s why. Using these 12 ball-juggling surfaces (laces/instep of both feet, outside of the feet, inside of the feet, thighs, chest, shoulders, head) and keeping the ball up in the air, use as many of those surfaces as you can in 60 seconds. Multiply the number of surfaces you successfully use (at least once), by the number of seconds you keep the ball up. Your maximum scored would be 12 x 60 = 720."

-- From “It’s Not About the Bra: How to Play Hard, Play Fair, and Put the Fun Back into Competitive Sports” by Brandi Chastain with Gloria Averbuch. 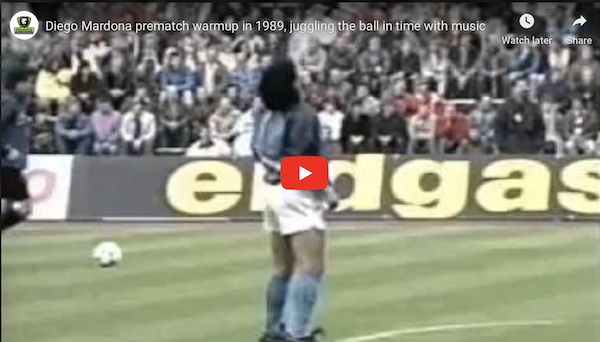 Diego Maradona's juggling warm-up for UEFA Cup final clash in 1989 against VfB Stuttgart. “There were 70,000 people in the stadium and Maradona went on the field," said Jurgen Klinsmann, who scored the first goal of a 3-3 tie that gave Napoli a 5-4 win on aggregate.  "We’re on the other side of the field, warming up like Germans: seriously, focused. … There’s music playing, the song 'Live is Life,' and to the rhythm of the song Maradona started juggling the ball. So we stopped our warmup. What’s this guy doing? He’s juggling off his shoulders. And we couldn’t warm up anymore because we had to watch this guy."

youth
9 comments about "Kids playing on their own: Juggling develops skill and provides fun with the ball".
Read more comments >
Next story loading