With live games on pause, an urge for soccer on screen can still be found. David Beckham, Howard Webb and Martin Tyler have cameos in the 2005 movie "Goal: The Dream Begins." 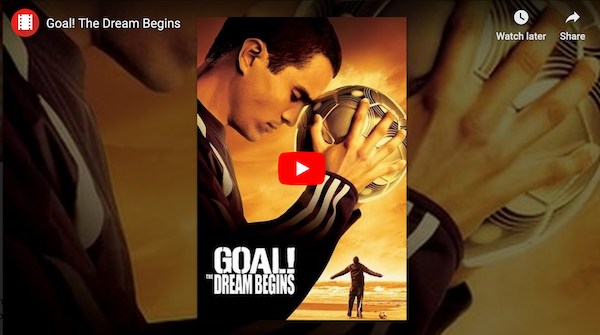 The Spiel
The 2005 movie 'Goal!' follows the at-times cheesy hero’s journey of Santiago Munez, a Mexican immigrant who’s scouted by an ex-Newcastle player while playing for an amateur Latino team in Los Angeles. The “young Mexican from the barrio” (Kuno Becker) delivers a convincing performance and we want to root for him from the get-go.

The cult favorite is best known as the first flick to integrate pro teams and players to a fictional tune. Cameos from the likes of David Beckham, Alan Shearer, Howard Webb — we even find Martin Tyler in the commentary booth — buoy up the film when the corn intervenes and the story falters.

Santi’s mother left the family years before, and that’s left his conservative father a cynical drunk who thinks it’s foolish to dream. “There are two people who live in this world,” his dad says early on in the film. “Those who live in mansions, and those who wash them.” Santi thinks otherwise, and their relationship is the most poignant relationship across the 118 minutes.

For most adults, 'Goal!' would be the predictable rags-to-riches story of the American dream set in Northern England that they take their kids to see (and love it). But buttressed by fairly good acting, an authentic soccer environment, and a protagonist who rings true, 'Goal!' instead occupies a unique seat in soccer film culture’s hall of fame.

Best line(s)
'Goal!' was ahead of its time — in terms of understanding U.S. soccer’s Latino issue, at least.

“Did you ever play professional?” asks Santi’s soon-to-be agent Glen Foy. “Well uh ... pro teams go for college kids and ... none of us went to college,” replies Santi.

The Backstory
The idea came to producer Mike Jefferies during the 2001 Cannes film festival when attendees applauded his Liverpool jersey the morning after the Reds’ 5-4 victory over Alaves in the UEFA Cup final. Here were the elites of the film industry giving pause for soccer, he thought. And there was never a major motion picture made about it. Yet.

So he shopped the picture around to different professional teams, hoping to weave together brand partnerships and unprecedented access to a pro team’s facilities and players with a rags-to-riches story that would appeal to burgeoning soccer markets around the world.

Thanks to some connections in high places, Sepp Blatter met with Jefferies and gave him the proverbial keys to the castle — this was free marketing for FIFA anyway. Adidas had to pay up, though; its $50 million partnership with the producers and adidas was the biggest deal between a brand and a film production at the time.

Liverpool rejected Jefferies’ pitch, but Newcastle’s then-chairman Freddy Shepherd saw the opportunity and took it for the same reason that Real Madrid did for the sequel: a Disney-distributed family soccer flick was just another exercise in expanding their global brand.

Did you know?
At the end of one of Newcastle’s home games in 2004, lead actors Kuno Becker and Alessandro Nivola jumped the advertising boards and celebrated with the Newcastle squad. The team’s top brass never found out.