The youth academy of the USA's top women's club, which is linked to the club where new U.S. Soccer president Cindy Parlow Cone coaches, is leaving the Girls DA for the ECNL.


Two weeks after Real Colorado and the Dallas Texans quit the Girls DA, the North Carolina Courage and Georgia’s United Futbol Academy (UFA) are also moving to the ECNL for the 2020-21 season. 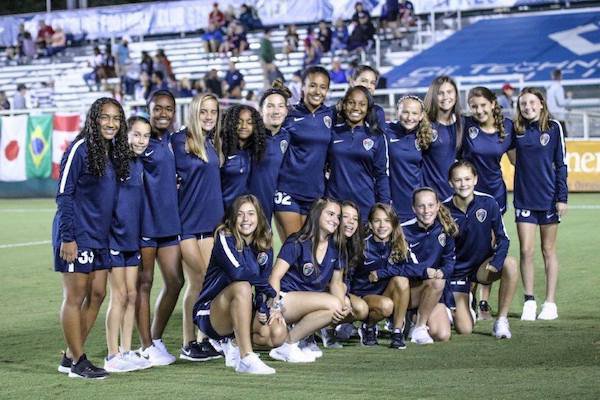 U.S. Soccer launched its Girls DA for the 2017-18 season, sparking a turf war with the well-established Girls ECNL, which kicked off in 2009-2010. The latest defections makes it 25 clubs that have withdrawn from U.S. Soccer's Girls DA during its first three seasons or withdrew after accepting an invitation.

The North Carolina Courage is the youth academy of the club that under Coach Paul Riley has won the last two NWSL championships and is affiliated through the Triangle Futbol Club Alliance with the non-profit North Carolina FC Youth, where Parlow Cone coaches and on whose board new U.S. Soccer CEO Will Wilson has served. (Parlow Cone, as the NCFC Youth director for the Durham/Chapel Hill girls teams, is not involved with the Courage academy). Riley also coached the Western New York Flash to the 2016 NWSL title. The North Carolina Courage Academy Director Sean Nahas was recently enlisted by U.S. Soccer to run a U-15 girls national team camp.

Real Colorado has been one of the nation’s most successful girls clubs based on U.S. national team program placement. Its director, Lorne Donaldson, and the Texans’ Hassan Nazari are among the country’s most accomplished youth club leaders.

United Futbol Academy’s departure along with the Courage leaves the deep southern part of the Girls DA East region with only five teams for the 2020-21 season.

In early March, U.S. Soccer announced it had finalized its DA’s 2020-21 membership and that it was downsizing its Girls DA. Soccer America estimates U.S. Soccer dropped five clubs from the Girls DA. Four clubs have since left by choice.

A comparison of how the ECNL and Girls DA maps for the 2020-21 season are unfolding indicates that the ECNL will be better poised for minimizing travel demands. That will be a crucial attribute in the post-coronavirus economy.

It’s also another reason why U.S. Soccer should lift its restriction on DA clubs from scheduling games against nearby ECNL teams.

•  ECNL President Christian Lavers: “We are tremendously excited to welcome the North Carolina Courage and UFA as new member clubs to the league. Both clubs have tremendous history and leadership, will continue to raise the standard of play and competition in the ECNL, and they will finalize a fantastic conference structure in the Southeast and Mid-Atlantic for the 2020-2021 season.”

• North Carolina Courage Academy Director Sean Nahas: “Since our inception, our NC Courage Academy has worked to establish a high level of training and standards for our female players and their development both on and off the field. As a program we look forward and are happy to continue that journey in the ECNL and the platform they provide for the female player across the country.”

• UFA Director of Soccer Iggy Moleka: “United Futbol Academy is extremely excited to be making our initial foray into the ECNL. We feel that the ECNL's high level of competition, showcases and recruiting opportunities, and travel schedule offers our membership the most comprehensive opportunity to maximize their development and dreams. UFA has been consistently working toward competing at the highest levels against the best talent and we are honored to be selected for this league and are looking forward to an exciting season.”