During Dr. Bob Contiguglia's tenure as U.S. Soccer President from August 1998 to March 2006, the USA suffered the al-Qaeda terrorists attacks of Sept. 11, 2001, and the SARS outbreak in China led to the USA hosting the 2003 Women's World Cup on short notice. Also during Dr. Contiguglia's presidency, the USA hosted and won the 1999 Women's World Cup and the men reached the quarterfinals of the 2002 World Cup. A kidney specialist M.D. who ran a private practice in Denver through 2007, Dr. Contiguglia is a clinical professor of medicine at the University of Colorado Health Sciences Center, serves on the Board of Directors of Colorado Public Radio, and is co-chair of the World Cup Denver 2026 bid committee. Bob continues his youth coaching with Real Colorado. 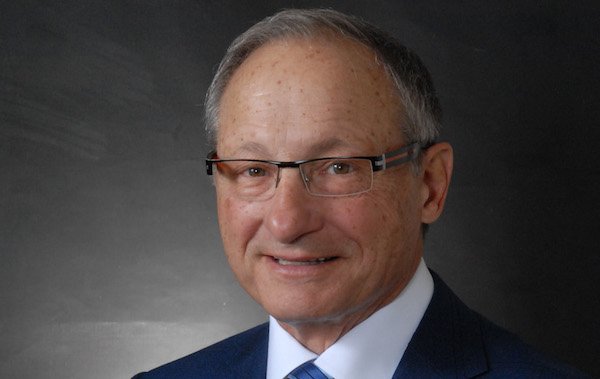 SOCCER AMERICA: How do you rate the response by the various levels of American soccer to the novel coronavirus outbreak?

BOB CONTIGUGLIA: The soccer community has been appropriate in following the recommendations and recent mandates of government, public health and medical officials. Canceling the various leagues is proper and will “lower the outbreak curve.” Of course, fans will be disappointed, but it will save lives and lower the pressure on the health care system.

I am concerned that I have seen some teams with 18 players training during this time. Small groups or pairs is probably OK with social distancing. This is no longer possible with stay at home orders. Healthy players need to understand that they can carry the virus, be asymptomatic and still pass it on to others.

Coaches play a critical role in keeping young players busy and professional players in match fitness. I have been pleased to see coaches and clubs doing online fitness and technical training to help players train at home. This is a great time for players to master their individual techniques and get more fit. A wall is a great place to get 1,000 touches in a day.

SA: Do you have any advice for the soccer community amid this pandemic?

BOB CONTIGUGLIA: Above all listen to expert medical and public health professionals and not politicians. Follow social distancing and stay home rules. WASH HANDS AND FACE REGULARLY. If you have symptoms STAY HOME. Behave as if you had the infection and do not want to give it to others.

This time off presents a great opportunity for the soccer family at all levels to work on solving soccer’s many challenges from organizational issues to player development.

At the organizational level, soccer interests should use the time to build bridges and attempt to find common ground to solve problems. We have more in common in building the game we all love.

Our new leadership should look forward to difficult times ahead. There will be societal problems with tremendous economic and personal challenges. These challenges may create less interest in sport for spectators, sponsors and players. Our leadership needs to get us back to normal as soon as possible.

Professional leagues and teams around the world will need to reassess the calendar, salaries, transfer windows, game scheduling and possibly canceling seasons. The economic impact on clubs, leagues and players will be huge.

My sincere belief is that we have built a strong foundation in the U.S. over the past 30 years. The attraction and support for the beautiful game is too strong for it to decline.

SA: Would you care to speculate on whether this pandemic will have a long-term impact on American soccer, and if so how?

BOB CONTIGUGLIA: This pandemic will have a significant impact on society and life in general. The economic challenges could affect sponsorship at all levels, player salaries, organizational fees, and staff salaries. I suspect the recovery will take years. Organizational budget analysis will have to be reviewed and redone as soon as this pandemic is over.

The good news is the 2026 World Cup that we will host along with Canada and Mexico. This event should be used as the platform to continue to build our sport with new public and business interest.

SA: You're on the Board of Directors of Colorado Public Radio and previously served as its Board Chair. How important is the role that public radio plays during a crisis such as this pandemic?

BOB CONTIGUGLIA: With the shrinking of print media and polarization of broadcast and digital media, it is critical for our society to have news reporting that focuses on facts and clearly differentiates fact from opinion. Public radio plays that role. It has become an invaluable source for factual non-biased information.

SA: Do you think that there may be lessons from the response to this pandemic that will lead to precautions and preparation so that in the future a similar outbreak may not cause such as profound disruption on sports, e.g. a World Cup?

BOB CONTIGUGLIA: I hope so. Continuous evaluating, planning and preparation by our governments is critical. Humankind has had pandemics of varied degrees throughout history. This one was identified early, but the U.S. response was weak and late.

We need to commit to regular funding for research for organizations like CDC (Centers for Disease Control and Prevention). 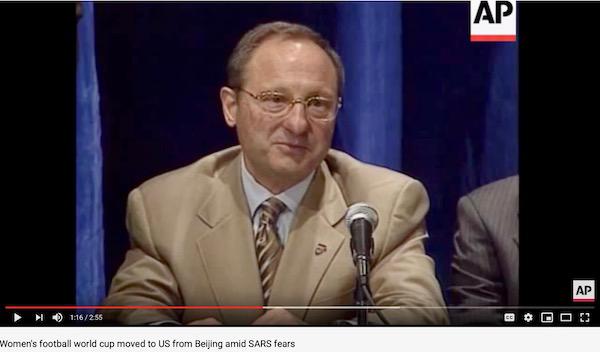 SA: In May 2003, because of the SARS outbreak in China, FIFA moved the Women's World Cup from China to the USA and it kicked off in September. As U.S. Soccer president and chair of the 2003 Women's World Cup, how difficult was it to pull that off? How different was SARS from the novel coronavirus that you were able to determine that such an international event would be safe?

BOB CONTIGUGLIA: When we were awarded the 2003 Women’s World Cup, there was concern about SARS in the U.S. We and FIFA consulted CDC and the WHO (World Health Organization). They felt that the pandemic had “burned out” during the summer and that travel to and play in September in the U.S. was safe. The major issue was accepting players from China, which we did.

Unlike SARS, today’s coronavirus is new, much more virulent and toxic since populations have not yet developed immunity to the virus. The respiratory complications become severe with many patients requiring ventilatory support. With SARS, there was considerable partial immunity to the virus and less severity.

When this coronavirus pandemic dies out,there could be a reoccurrence in the fall which we need to be prepared for. Hopefully, there will be better planning along with vaccines and anti-viral medications.

SA: What was it like for to be U.S. Soccer president after the 9/11 attacks, which were followed by the U.S. invasion of Afghanistan and Iraq? Were you called on to make difficult decisions regarding national teams? Was there much consultation between U.S. Soccer and the U.S. government?

BOB CONTIGUGLIA: After 9/11, our world changed especially in the areas of team security. All U.S. teams are considered potential terrorist targets. Our teams travel with private and government security. When on the road, we get regular State Department briefings and coordinate with the local authorities and FIFA. When we are in another country, the host is responsible for security and coordinates with government and federation security staff.

In 2003 for the Confederations Cup in Lyon, France, there was a warning about a possible terrorist attack against our team. These warnings were frequent. After consulting with the State Department, the French government and FIFA, we agreed to go the tournament. The French government changed our hotel and we had increased security around our travel and in the hotel. I was also told that the French arrested many “potential trouble-makers” and jailed them for the tournament. The tournament was uneventful.

My most moving and vivid memory happened shortly after 9/11 when the men’s national team played the Italian national team in Catania, Sicily. When we arrived at the Catania airport, we were met on the tarmac by police (SWAT) escorts. We were rushed through immigration and bussed directly to the hotel where armed soldiers were on every floor.

We had a formal greeting with the mayor of Catania. They were proud that both the U.S. coach, Bruce Arena and the Federation president were of Sicilian heritage.

We went to the stadium where there was a crowd of over 40,000 fans. When the teams came on the field, they were greeted by a young soprano in a full-length opera gown and a 100-piece military band. The stadium lights went down. All of the fans lighted candles and sang “The Star Bangled Banner” in English. A large banner was rolled down over the stands which said in Italian “United States, Your tragedy is our tragedy.” I was in tears and will never forget that moment.

During World Cup 2002, we were based in Seoul, South Korea. Our hotel was secured with metal detectors and secured floors. We traveled with escorted motorcades and the airport terminals were guarded by tanks and military. Our training ground was secured with snipers, and biological and radiation detectors.

SA: How do you feel about U.S. Soccer's recent change of leadership with Carlos Cordeiro's resignation, the elevation of Cindy Parlow Cone as president, and the hiring of CEO/Secretary General Will Wilson?

BOB CONTIGUGLIA: I am saddened by the recent events, but believe our federation will come out stronger. I know Carlos well and feel he made significant positive changes for the organization. He always respected and supported the women’s national team.

I worked with Cindy on the [U.S. Soccer] board and knew her as an outstanding player. She was an excellent board member and vice president. Cindy, the board, and the new CEO will have major challenges ahead to re-establish U.S. Soccer’s standing with its members, players, sponsors and media. I believe the foundation, skill and character is there for success.