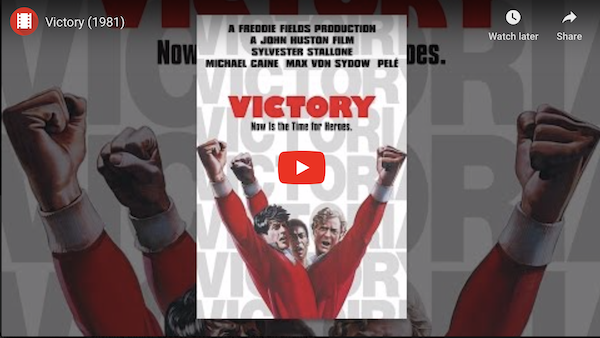 The spiel
Watching "Victory" for the first time the other day was an exercise of nostalgia and frustration in equal measure. As a 21-year-old, I never saw the likes of Pele, Bobby Moore, or Osvaldo Ardiles play, but their careers still cast long shadows over the global game. It’s a shame "Victory" didn’t capture more of their magic, something that could be said for the film entirely: the parts of the movie are much, much greater than its sum.

Rather than granting the players screen time in a sports movie, director John Huston gave free reign for Sylvester Stallone (playing Captain Robert Hatch) — a designated Hollywood star fresh off of Rocky II — to steal the show. Even after training with legendary goalkeeper Gordon Banks before shooting began, Stallone’s soccer performance leaves a lot to be desired.

The dialogue early on is bumpy if not boring and the plot defies logic: all it takes to plan an exhibition match during a war is a few conversations between a German officer and English Captain John Colby (Michael Caine) at a POW camp. What follows is a montage of workouts and a prison escape by Stallone that would leave Steve Mcqueen rolling in his grave.

But if you can suspend disbelief, "Victory" does offer some glorious moments. Pele’s signature bicycle kick is so good there are 30 seconds of it, and watching Bobby Moore slide tackle Nazi scum again, again, again and again is sweet entertainment. And Osvaldo Ardiles’ performance made me look up a highlight reel of him afterward — the Argentine World Cup champion is often forgotten but in his day he was one of the best midfielders around.

What’s odd is, that’s about it for the trio’s performance. Pele is caricatured as a docile and dumb Caribbean officer who’s only skills are on the field. It’s painful to watch one of the best players of all time lose screen time to an American in a soccer movie set on the 1940s.

What’s impressive about "Victory" is that the producers were able to get so many big egos working together under one roof, and in the end, that’s what makes "Victory" able to stand up to the test of time. For all its faults, it’s unlikely another soccer movie will eclipse it in sheer ambition. Unless, of course, a remake that’s in the works comes to fruition. Hopefully this time around, Hollywood can get it right.

Best Lines
Stallone, as Capt. Robert Hatch: “Where do I stand for a corner kick?”
Michael Caine as Capt. John Colby: “At the far post, facing the ball.”
Hatch: “Thanks. For a while there I thought you were keeping it a secret.”

Did You Know?
When practicing in between the sticks off-camera, Stallone tried to block one of Pele’s shots and consequently broke a finger. He also cracked a few ribs before listening to Gordon Banks’ advice more closely.

Trivia
What country does Pele hail from in the movie?


The Brazilian says he acquired his skills in Trinidad.

Bonus Trivia
Baumann, the captain of the German side, is played by Pelé's former New York Cosmos teammate, Werner Roth.