Last week, FIFA president Gianni Infantino  issued the following statement: "Our first priority, our principle, the one we will use for our competitions and encourage everyone to follow is that health comes first," he said. "I cannot stress this enough. No match, no competition, no league is worth risking a single human life. Everyone in the world should have this very clear in their mind. It would be more than irresponsible to force competitions to resume if things are not 100% safe." 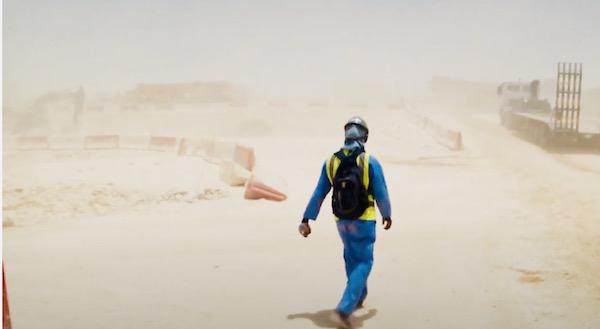 Last month, the "supreme committee" organizing the 2022 World Cup in Qatar reported that nine migrant laborers working on stadium construction had died during 2019, bringing the total of worker deaths over the past six years to 34. The unofficial figures are likely much higher because many of the deaths are caused by heat exhaustion, but no post-mortems are carried out. Only under concerted pressure from human rights activists has Qatar recently been pushed into reforming its notorious 'kafala' labor laws, but even these reforms to abolish modern slavery have yet to be ratified. For all of Qatar's underpaid, injured and deceased migrant workers it's too little, and it's way too late.

Despite Infantino's apparently noble statement, released in the context of soccer's current worldwide suspension, FIFA has been negligent in applying pressure to Qatar to properly treat and pay workers building the venues that will be hosting the next version of its flagship, cash-yielding mega-tournament. Let's repeat Infantino's words: "No match, no competition, no league is worth risking a single human life." So Qatar 2022 is going to be called off? Or should we be adding the qualifying clause, "unless it is the life of a laborer from the African or Asian sub-continent, in which case we play on”?

Bearing all this in mind, it is very much worth re-watching Adam Sobel's documentary "The Workers Cup" (Amazon Prime), originally released in 2017. When international contractors decide that a good way to boost their public profile is to stage a 24-team soccer tournament for their workers, Sobel lands the authorization to follow a team of Nepalese and African laborers working for the Gulf Contracting Company (GCC) in Doha as they aim to lift The Workers Cup. 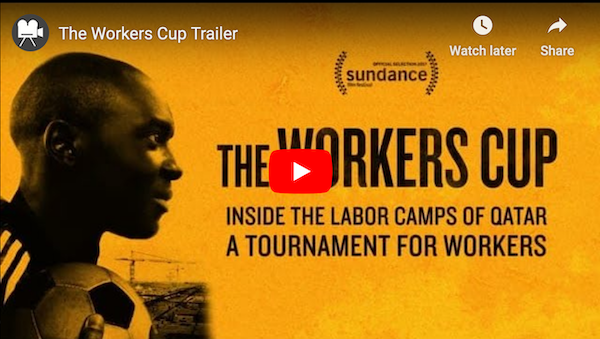 The tournament offers the players the chance to escape the drudgery of their daily existence -- long hours and no leisure. "All you think about is to get up, go to work, and get back and rest," says Kenneth, an aspirant soccer player from Ghana who paid $1,500 to an agent for a visa to Qatar under the impression that he would then be able to sign for a local team. That was a lie -- he spends his days wearing a face mask and wielding a shovel for a pittance. So now he hopes that he can use the tournament to raise his profile.

The movie conveys the tedium of the work and the claustrophobia of the laborers' dormitory accommodation, so that when the action moves to the field of play you feel as briefly liberated as the players. You also sense the crushing disappointment when they lose their first group game by five goals to one. GCC general manager Grahame McCaig, the players' white overlord, offers flippant consolation when he tells them, "Don't worry about it, it's only a game." Not to these lads, it isn't, you condescending lummox.

The players ask GCC for training facilities, and we see them practice on a small, flooded turf field. Performances pick up with the help of a new goalkeeper. It's not all about the sport, though. In the canteen, players talk about what they understand by freedom, and what they miss about home. We hear them trying to be good fathers and husbands by long-distance phone, and we sense how utterly detached they are from the world that they are building for the wealthy and the privileged, and how imprisoned they are in their accommodation camps. Yet there is no anger, and only mild resentment. They are stoical, driven on one level by the unsubstantiated hope that things might improve, but also by the need to meet their pressing financial responsibilities back home.

As a viewer, you pull for the team while hating the fact that every victory means a publicity triumph for their employers. In one of the final scenes, two players taking leave of the country sit in a Doha park and contemplate the high-rise skyline. One points to a building he worked on and says he was there when four co-workers were killed in an accident. His companion points to another and says he knew a Chinese worker died there.

By that point, the tournament's results have already become insignificant -- as do the results of all sporting tournaments once they're over and done with. Because, in the words of FIFA's president, "no match, no competition, no league is worth risking a single human life."