SA coverage: How the 2020 pandemic is reshaping the soccer landscape

Here's some of Soccer America's coverage of how the American game is being impacted. New interviews and analysis and more advice this week from the SA staff. 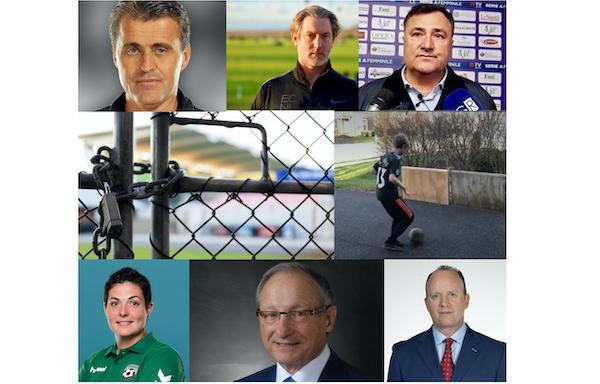 NCAA rejects controversial request for blanket waiver that threatened Division I soccer and other non-revenue sports
The NCAA Division I Council won't consider a request from 27 NCAA Division I conferences seeking emergency legislative relief to waive Division I requirements about the minimum number of sports a school must sponsor.

U.S. Soccer's ride back to Earth seems anything but smooth
After the Copa America Centenario pushed U.S. Soccer’s assets up to $162.7 million, the federation embarked on a spending plan that would take that stockpile down to $50 million, the financial equivalent of an old-school NASA capsule gently splashing down into the Pacific Ocean after orbiting the moon.

New Yorker Joe Barone on life in Italy and running a Serie A club amid COVID-19
Last summer, New Yorker Rocco B. Commisso acquired ownership of Italian Serie A club ACF Fiorentina and named Joe Barone, who had also immigrated to New York as a child, club CEO. Serie A was the first European league to suspend play and implement a nationwide lockdown.

Peter Wilt: Fans must be included in the process of steering soccer through a huge unknown
Throughout his career, soccer exec Peter Wilt  has been well known for communicating and connecting with fans. The pandemic has interrupted his latest quest.

Will COVID-19 push U.S. women's lawsuit to settlement or catastrophe?
If either side wins summary judgment, it’ll be a catastrophe for the loser. Same is true if either side “wins” at trial.

Bugeaters FC owner Jonathan Collura: It's a time for clubs to partner up, focus on being a community hub, and help those in need
Because of the coronavirus pandemic, the team will not have a 2020 season. Instead, Bugeaters FC will be donating 100% of all online club shop sales to the Omaha COVID-19 Response Fund.

Just how essential is soccer in our lives?
We don't yet know how great will be the death toll from the coronavirus or how long all or parts of the United States will be sheltered in place or just how badly hit will the economy be. But we will never look at the world the same again.

USYS CEO Skip Gilbert's advice for all youth clubs: 'Stay connected with your parents, be transparent, be honest and be sincere'
Skip Gilbert was only into his third month as CEO of U.S. Youth Soccer when the coronavirus was declared a pandemic. He talks about where his organization fits in for elite clubs in the aftermath of the DA's demise and the challenges that its members face.

Bernie James on the DA's collapse: 'To just abandon everyone creates panic and problems for everyone involved'
Crossfire Premier, based in Redmond, Washington, 15 miles east of Seattle, joined U.S. Soccer’s Boys Development Academy upon its inception in 2007. It began fielding teams in the Girls ECNL upon its launch in 2009, and in the Girls DA when it started in 2017.

Christian Lavers on the prospects of ECNL-MLS synergy and working with new U.S. Soccer leadership
That the ECNL would solidify its claim as the top girls league in the nation in the wake the Development Academy's demise comes as no surprise. The Boys ECNL is only its third season but before U.S. Soccer made official the DA collapse, Boys DA clubs started committing teams to the ECNL.

Sources: Former U.S. Soccer executive Jay Berhalter will consult MLS on design of new development program
Jay Berhalter, who stepped down from his position as U.S. Soccer's chief commercial and strategy officer at the end of February, will work as a consultant on the new MLS player development project the league.

The high school view: Some COVID-19 consequences are clear, many others are not
In the best of times a high school soccer coach is a trainer, tactician, teacher, psychologist, nutritionist, guidance counselor, mentor, parent, friend and guide. These are not the best of times.

U.S. Soccer's role in youth soccer will change dramatically. For better or worse?
With this crisis comes the opportunity to reboot American youth soccer, and a chance for U.S. Soccer to regain the trust of its disillusioned membership.

A sampling of Soccer America's 2007 coverage of the U.S. Soccer launching the Boys Development Academy:

U.S. Soccer Development Academy: The Impetus
A U.S. Soccer Technical Committee, headed by Kevin Payne, concluded that on the youth player development front, at ages 13 to 17, elite players needed an increase in the quality and quantity of training; an increase in the number of quality games, but a reduction in the overall amount of games.

Taming the Wild West
Creating the U.S. Soccer Development Academy is the USSF's first step in trying to take advantage of the strengths of American youth soccer while tackling its flaws.

U.S. Soccer integrates the country's top youth clubs into the national team program
Sixty-three clubs and the U.S. national team will field teams in each age group. The players will not participate in the traditional player identification scheme - the U.S. Youth Soccer-run Olympic Development Program - because they'll be scouted by Federation staff coaches in their Academy league play. (Includes list of 64 founding clubs.)

NCAA hits pause button on men's college soccer's quest for split-season
The NCAA seemed on the brink of approving major reform for men's college soccer with a Division I Council vote in late April. But a decision on the proposal to switch to a fall-spring split season has been put on hold because of the COVID-19 pandemic.

Wellness influencer or snake oil peddler? Beware of unproven quick-fixes
There’s so much upheaval in our personal and business lives now so it’s only natural that we’re on the lookout for the fastest possible solution. We’d encourage each of you to be particularly vigilant regarding unproven quick fixes, often promoted by social media influencers.

The high school view (Part 2): How coaches can raise their game during the pandemic interruption
Spring high school soccer seasons are over before they began. Fall seasons seem increasingly imperiled – at least the way we’re used to. What’s a high school soccer coach to do? Plenty.

COVID-19 impact on youth soccer: Haley Carter provides advice for clubs and parents
Upon the suspension of youth soccer activities because of COVID-19, United Soccer Coaches' Haley Carter  reached out to clubs around the nation knowing players, parents, coaches and directors are concerned about the immediate and near-term future.

The new role of the coach: Evolving to fill gap in our social safety network for children
Our jobs as coaches must evolve to meet the needs of the moment and serve the children under our charge.

Kids playing on their own: Juggling develops skill and provides fun with the ball
How children can improve their soccer without team play provides video to emulate the stars and variations of juggling for players of all levels.

When in-person training and games are not possible, the coach can still coach
A nice mixture of options that might engage the body, the mind, and the "spirit" of a youth player.

This crazy time can be an opportunity to reboot and recover
During this period of forced time off, if your life circumstances allow then take the time to get some rest, then get back in to building baseline fitness and individual skills..

Becoming a Better Ref During This Down Time
During this down time, here are some steps to become a better ref so that you’ll be ready whenever games are resumed.

Navigating the college choice process during COVID-19's interruption: Advice and info from Lisa Lavelle
Information and advice for high school seniors who have not yet committed to a college for 2020-2021.