In his novel The Magus, John Fowles  wrote that being a physical coward is an "automatic definition of high intelligence." The quote brings to mind the scene in the laughably poor 2005 movie Green Street Hooligans, when expelled Harvard undergraduate Will Buckner (played by a gog-eyed Elijah Wood) realizes that the gang of English soccer thugs he's improbably fallen in with are about to be involved in a backstreet fight with the followers of a rival team. His Ivy League instinct is to yell that they should all cut and run, but that's not what his new friends are here for. After a mass ruck where he somehow suffers little more than a fat lip and a couple of grazes to the cheek, Will undergoes an epiphany that prompts him to dump his high intelligence in a London gutter while smiling: "These are my mates! These are my family! Fighting's cool!" 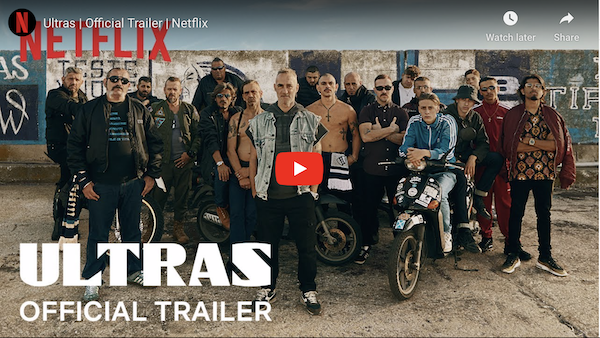 By contrast, there are two short moments of doubt about the virtues of violence toward the end of Ultras (directed by Francesco Lettieri, available on Netflix), a bleak, grainy movie set in the back streets of Naples among a long-established sect of Napoli fans, the Apaches, who may or may not have neo-fascist leanings. The first is when a minor character questions the wisdom of heading to Rome for an away game when they will be seriously outnumbered. He is immediately shouted down by his comrades and accused of having no bottle. The second comes at the fight itself, when aspiring young ultra Angelo (Ciro Nacca), possibly concussed, hesitates for a short second and surveys the bleeding carnage around him with an expression of baffled dismay.

Angelo's there to avenge his dead brother, killed in a previous battle. He's the protégé of one of the leading Apaches, Sandro (perfectly played by Aniello Arena), a wiry, charming and psychopathic ultra now in his 50s who becomes involved with a woman and begins to wonder if he's getting too old for this kind of thing. Worn as this plot may be, one of the movie's most dynamic scenes sees him confronting fellow old-hand Bara (Salvatore Pelliccia) when the latter accuses him of having lost interest in The Gang. Sandro gets right up in his face and presents a loud and cogent argument for doing something less destructive with their lives. Needless to say, Bara turns and leaves in disgust.

If this is the flipside to Will's moment of punch-drunk reverse enlightenment in Green Street Hooligans, it doesn't last long. Movies about violence seem welded to the mafia cliché about getting sucked back in. Of course Sandro can not abandon Angelo and the Apaches when they head to Rome for the big one. In this respect, the movie's a let-down. While I'm all for eschewing the hackneyed Hollywood road to redemption, there is no serious attempt in Ultras to examine the social causes of extreme, gratuitous violence or the underlying prevalence of anger-fueled machismo. It's just there -- there at the start of the movie, and there at the end, with no apparent escape path. If you're not part of the clan, you wouldn't understand.

If you can disregard this major failing, there are many good things about Ultras compared with previous (mainly UK-produced) hooligan movies. The acting and the camera work are both professional, and the intra-clan feud between the older and up-and-coming generation of ultras is convincing -- that is, these groups are not just about violence, they are about power and control. They are not rebelling against anything beside themselves, because as a collective they are no more than a bunch of conformist, psychotic para-militaries who clamp down hard on anyone within their ranks who deviates from the party line of violence, blind loyalty and contempt for women. Oh, and accidentally painting over the edges when making banners.

There's also no pretense that all this has anything to do with soccer. The only time that the sport itself intrudes on the action is when Sandro -- banned from attending all games -- has to sign in at the police station when the match is on. In the background we hear snatches of radio commentary, while there is a barely regarded sub-plot about Napoli being in contention for the scudetto. That we never find out who wins on the field is a point in itself.

The violence in Ultras is neither sanitized nor glorified, but nor is it properly analyzed. It's a depressing, fury-infused movie that ends as it starts -- outside a battered church with the Apache singing of their undying love for a team that's hardly otherwise mentioned.

The topic of right-wing extremism that bedevils the Italian ultra milieu is avoided, although that may have been to protect the safety of those involved. As the movie starts, there's a disclaimer that it is entirely a work of fiction, and was not made with the cooperation of any extant ultra group. Whether in the movie or real life, these are not the lovable, laugh-along, cookie-cut cockneys of Green Street Hooligans who like a beer and a bundle. They're scary as hell, and if you cut and run when you see them coming, you're probably running in the right direction.