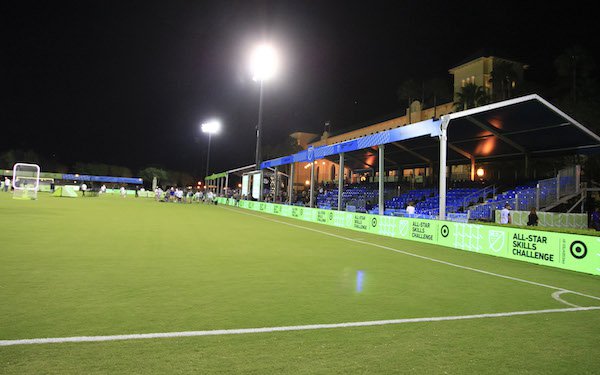 Orlando in the summer -- hot, humid and very often rainy -- might not appeal to everyone, but it just might have to do if MLS is to get back on its feet following the shutdown caused by the COVID-19 pandemic.

Orlando is the home of Disney World and more specifically the ESPN Wide World of Sports that could serve as the base for MLS's restart.

The Washington Post reported on Monday that MLS is working on a plan to assemble all 26 teams at ESPN Wide World of Sports and perhaps other sports facilities for training and games -- without fans -- as part of the first stage of the league's relaunch that would presumably continue later in the year at league stadiums around the country. It's an ambitious plan that would be contingent of having approval from health authorities and require massive safety protocols and a sign-off from players.

The ESPN Wide World of Sports complex opened in 1997 and was the venue for many MLS activities at the 1998 All-Star Game in Orlando and again in 2019.

The 220-acre complex offers 17 fields that can be fitted for soccer and other sports. They are used for the Disney Soccer Showcase, one of the biggest soccer tournaments in the country. Several other MLS clubs --  Colorado, FC Dallas and Sporting KC -- offer large soccer complexes at which teams could be based.

But a move to Orlando would give MLS and its teams a run of the facilities under one umbrella in and around Disney World.

Several of the Disney World resorts usually filled with tourists are located within two miles of the complex. They could house players, coaches and staff from the 26 teams, as well as those who would need to be on site, including referees, league staff and broadcast and other media. And that's on top of medical staff, security and those who work at the facilities.

The ESPN Wide World of Sports complex includes an athletic center as well as studios. With games behind closed doors, MLS will seek other ways to reach and engage with fans.

Other soccer facilities in the Orlando area include Orlando City's Exploria Stadium in downtown Orlando and its new 20-acre complex at Osceola Heritage Park in Kissimmee.

With all its properties closed except the Shanghai Disneyland theme park, which reopened to the public on Monday, an opportunity to have MLS or any major league use its sports complex and resorts in the summer would be very attractive to Disney.

ESPN has been an MLS broadcaster, dating back to the league's first game in 1996. The ESPN+ streaming service has carried all out-of-market MLS games not carried on national television since April 2018. MLS's current eight-year agreement with ESPN, Fox Sports and Univision expires after the 2022 season.

ESPN has been MLS's most loyal and important partner. The only one that comes close is adidas, but it doesn't have the media influence ESPN has. In 2007, then-ESPN executive vice-president John Skipper doubled down on the network's commitment to MLS, agreeing to a new contract that paid the league a small rights fee for the first time.

It wasn't just the monetary contribution that was significant -- -- $20 million a year was a modest sum -- but it was Skinner's commitment to use ESPN's power to help grow MLS at a time when the league's future was still not assured.

MLS and Disney probably never figured they would brought together again in another time of need like they might be soon.