College soccer -- the men’s version -- has been going through something of a crisis recently. Caused by the fear that the NCAA might take action that would threaten the very existence of many college soccer programs. The threat still hovers.

It is obviously not something to taken lightly. After all, men’s college soccer matters ... doesn’t it?

Oh of course it does -- but I find it difficult to explain why it matters. So I’ve decided to do some pondering on this tangled topic. Looking back on my own experiences with men’s college soccer, some good, some bad, and some, well, just plain weird. 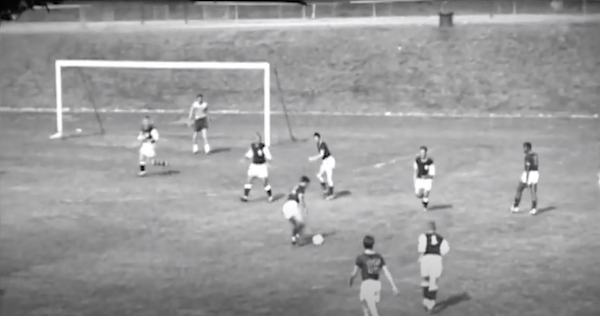 There’s need for caution here. Setting the right tone is all important. I will try not to mock the sport, or to over-value it -- I’ve done both over the years -- an indication either of my inability to make up my mind, or of college soccer’s worrying lack of identity. Both, probably.

My first clash with college soccer -- it was a clash, you’ll see -- came in the fall of 1960. I’d been in New York for about a year, had prowled about looking for soccer games, had found some ethnic soccer -- mostly Italian -- in deepest Brooklyn.

I’d made inquiries among the ethnics about college soccer, but they tended to answer my queries with comments and gestures that strongly suggested scorn. College soccer, their body-language was telling me, was a joke, nothing that I need bother about.

You know how it is -- the more they tell you not to bother, the more you want to know. Anyway, it seemed important. College soccer was surely American soccer, something that did interest me. So, one Saturday morning in the fall of 1960, I set off to the northern tip of Manhattan to watch Columbia University.

Nice field, not many fans. And all of them sitting down. I immediately felt uncomfortable. Not because of the hard benches but, heck, I’d attended hundreds of games in England, and had only very rarely been seated. The ethnic games in Brooklyn had featured bleachers, but there was always plenty of space where I could stand and -- what I really liked to do - move about. Not here. So I sat, nursing my first grievance with American soccer.

That was merely an irritating beginning to a thoroughly disturbing couple of hours. Things got curiouser and curiouser. The game got under way. Right -- and who on earth was that odd looking guy charging about in a black and white vertically striped shirt, waving his arms about like one of those military-style Italian traffic cops?

Well he had a whistle, so he must be the referee. His flailing arms were signaling, letting us know what he was calling. That was interesting. For a moment or two.

Then I had to fight back the idea that I was suffering from shock-induced visual disturbances ... there really were two of these oddly clad guys running around on the field, one in each half. And no linesmen. My soccer world was rapidly disintegrating.

To preserve reality, I invested the referees with comic value, giggling at their silly (I thought they looked silly at the time) shirts and exaggerated gestures. And I’d never seen a soccer referee wearing a hat before. I was told later that these were baseball caps, allowing me to further amuse myself by viewing them as a clumsy attempt to Americanize the sport.

Two referees, both wearing vaudeville outfits and flinging their arms all over the place -- I simply could not take that seriously. Surely their brand of refereeing would be farcical. A call was made -- an indirect free kick in the penalty area. The ref’s signal was a sort of pushing motion. The coach of the team that was awarded the kick shouted ”That was pushing? Then we should have a penalty kick!” The referee shouted back “Oh no, he wasn’t pushing that hard.”

OK, I’m stretching things here. That anecdote was told to me some years later by a college coach. But it fits perfectly into that game I was watching in 1960, exactly the sort of zany decision I was sure the vaudeville refs must be making.

My soccer aesthetics suffered another brutal blow. Substitutes. I’d never seen a soccer sub before. They were never used in the sport as I knew it, were in fact frowned upon. Yet here they were, checking in, checking out -- I think, horror of horrors, I even spotted a subbed player being allowed to re-enter. There may have been a kick-in instead of a throw-in -- then again, maybe I invented that, or transferred it from a different game.

The worst part of this surreal experience was that the game itself, when I could concentrate on that, was just dreadful. Devoid of subtlety, short of skill, dominated by aggressive running and -- a favorite word of college coaches, I was yet to learn -- hustle. Ugly to watch, a distorted, tortured travesty of the sport I was so fond of.

I fled, determined never to return to college soccer. I had no trouble sticking to that vow for 10 years. I was not, after all, a sports journalist. Not yet, anyway. I was working for a medical magazine.

Like I said, I had clashed with college soccer, and I retired, bloodied but unbowed, from the fray. Came 1971 and things were different. I had transformed myself from being a well-paid medical journalist into a sporadically and poorly paid soccer journalist. Soccer had undergone its own, massive, transformation: There was now a promising, nationwide pro league -- the North American Soccer League.

And here was college soccer attempting to exploit the sport’s growing popularity by announcing that its Division 1 soccer final four tournament (two semifinals, then the final) would be played in Miami’s Orange Bowl for the next three years.

Obviously, they’d completely lost their marbles. No way that horrendous caricature of the sport I’d seen 10 years earlier was going to attract fans. But ... well, perhaps and possibly and maybe, it could happen. College soccer might have matured, no? So I went to those three finals in Miami.

The most noticeable thing about them was that nobody -- and I mean nobody -- turned up to watch. The Orange Bowl was an enormous, ugly bucket, an 80,000 capacity stadium, and it was empty. Eerily, echoing, emp-teeeee. I doubt whether the spectators at all three of those final games lumped together totaled many over 1,000.

I spoke to a gentleman, a Miami businessman I believe, who was one of the organizers, and asked him (tactfully, I hope) how he could explain the abysmal attendance. “I can’t,” he replied, “We spent a lot of money on publicity. We had posters in both English and Spanish -- we targeted the Latino community, especially the Cubans.” I became even more tactful (I think). “Oh, well, er  .. I mean . . . I don’t think there’s much interest in soccer in Cuba, you know. They prefer baseball ...”

You read about people whose jaws drop, who turn white, or who stagger backward as though they’ve been struck ... this poor guy seemed to me to do all of that. He had nothing to say -- at least I recall no answer of his.

But it wasn’t just naivety on the marketing front. College soccer in the Orange Bowl was a huge mistake. The sport was nowhere near ready for the big time. 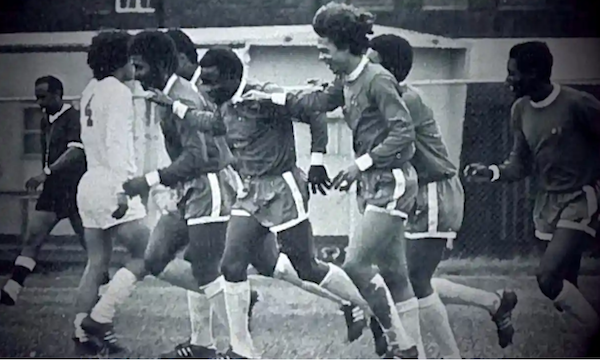 Even so, to my surprise, the caliber of the game had definitely improved. Briefly, Howard University beat St. Louis University in the 1971 final, which was quite a presentable game. St. Louis was recognizably a college team -- still the running and the hustle -- but with a good deal more skill. Howard showed much more skill and subtlety.

The catch was that the Howard players were foreigners -- mostly from the Caribbean islands. St. Louis players, traditionally, came from St. Louis or nearby. In the next two years, the West Coast teams UCLA and San Francisco arrived, each sporting a number of talented Latino players. College soccer -- though still maintaining various eccentric rules -- was definitely opening up. I was impressed enough to make the first big U-turn in my assessment of the college game.