The quality of the soccer was much, much better than I had last seen it -- some 10 years earlier. Not only from Howard’s foreigners but also from the relentlessly American boys from St. Louis. I sensed - or, rather, believed - that I was seeing the beginning of a great leap forward by college soccer. 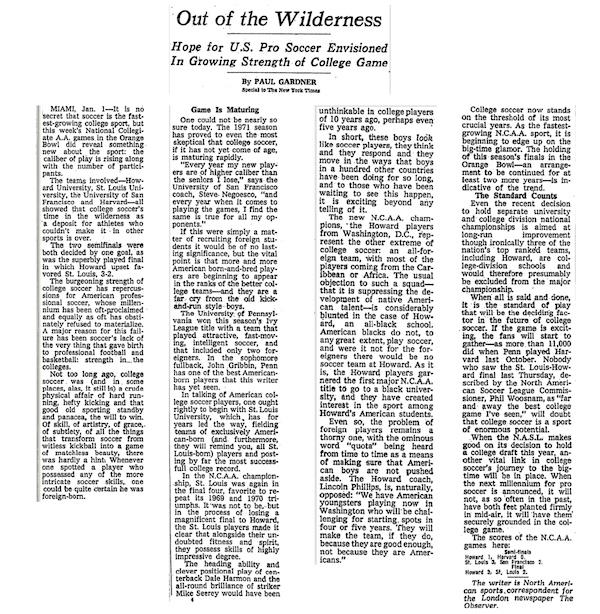 I wrote a glowingly enthusiastic feature for the New York Times in which I called college soccer “a sport of enormous potential.” Yes, I believed that to be the case. It really did seem to me that college soccer was beginning to fit in alongside basketball and football in the American scheme of things, as a sport that would provide a constant stream of young talent for the pro game.

New and attractive visions were opening up, and I allowed my enthusiasm to over rule my judgement. Logically, I proceeded to laud the NASL’s decision to hold its first-ever college draft. I really should have known better.

I attended that first NASL draft, in 1972. Something was badly wrong. It was quickly and unmistakably clear that none of the NASL coaches knew very much about any of the college players, and, in truth, had little interest in the draft. It was, sad to tell, a joke.

A few years later, trying to justify my optimistic predictions, I blamed the NASL coaches, most of whom were foreign, for the draft’s failings. It really did look as though they did not rate American players. There was something in that argument, but it was not the heart of the matter. That resided in the sport itself -- not the sport of soccer, but specifically the sport of college soccer. Of which more in Part 3.

I don’t think the draft ever advanced beyond the joke stage. How on earth was it possible to ignore the fact that in the 1978 draft, 96 players were chosen and the most successful, looking at his subsequent performance, was Pat Fidelia. He was drafted dead last, with the 96th pick. If such a colossal anomaly could be overlooked, anything seemed possible. The anomaly was blithely set aside. The NASL draft continued.

By 1977 I was evidently beginning to come to my senses. I wrote that “the college system has not been producing players of professional caliber” and that “a major problem has been building.” By 1980 my second U-turn on college soccer was nearly complete and, in an article titled “Is there any hope at all for colleges?” I lamented: “it has seemed to me for quite a few years now that the colleges cannot adequately train pro players.”

That conviction grew much stronger. And very little has been done during the past 40 years to change things. Yes, the game on the field has been improving, but not nearly enough. By 1987 I had pretty much given up on college soccer. It was a time when there was no pro soccer. “If college soccer is all we’ve got,” I wrote, “we need to be sure that the colleges take the sport seriously. Sadly, I’m not at all sure that they do.” 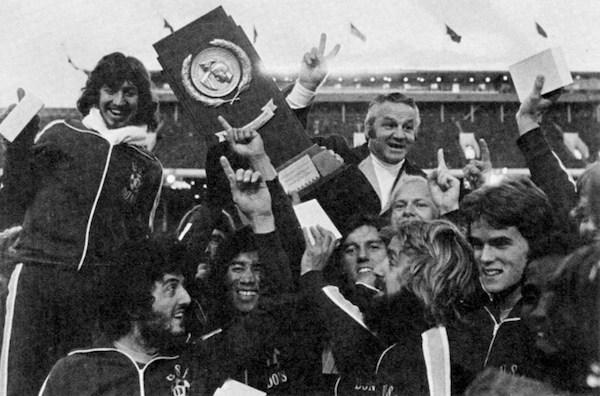 Sadly ... yes, with sadness, because over the past decades I had many discussions with college coaches who sought changes in the college game -- e.g. a longer season, adherence to FIFA rules. Good men, like Steve Negoesco, Joe Morrone, John Rennie, Jerry Yeagley, Ray Reid. I got to know these guys quite well. I did not always appreciate the soccer their teams played, but they all put in a lot of hard work to improve college soccer. Yet their efforts had little effect. Today it is the articulate Maryland University coach Sasho Cirovski who is leading the pleas for meaningful changes. I wish him luck.

In the late 1970s the storm clouds were gathering. As the NASL stumbled toward its downfall the draft assumed an importance it had never had before. The NASL was suddenly emphasizing the importance of Americanizing the game. The colleges were now required to live up to their ostensible purpose of training pro-level American players. So NASL clubs were relying on the draft to help in this unarguably praiseworthy aim of Americanization. Young Americans, drafted from the colleges, were about to get their chance.

It was quota time. In 1979, the NASL mandated that each club must have at least six Americans (or Canadians) on its roster, and that at least two of them must be in each starting lineup. In 1980, the NASL’s proclaimed “year of the North American player,” the required number of native starters was raised to three.

Favoring native talent was a popular move, but for many -- myself included -- this looked like a deception. To us, the real reason why the NASL was suddenly cherishing the draft was starkly crass. It was money. Something the NASL was running out of. One way of cutting expenses was to sign more Americans -- they cost a lot less than the foreigners.

But a decade of stats from the draft showing that draftees, even the No. 1 picks, rarely got much playing time, could not be denied. The totally predictable result of more American players on the field was a drop in the caliber of the soccer.

The colleges simply could not supply pro-level players. And the NASL withered into nothingness.

When MLS arrived in 1996 one of its first acts (in March) was to stage a college draft. It did not look like a sensible move. In a marketing sense, maybe it would score some points, proving that MLS was on the same level as the NFL. But its soccer value was questionable.

Yes, there definitely had been signs of improvement in the college game. The four-year reign (1991-94) as champions of Bruce Arena’s Virginia introduced a lively team that played skill-based soccer that was a far cry from the traditional hustle and bustle of the college game.

But fundamental changes were in the offing. At long last, the message was getting through: being a college star, going on to a high draft pick, was absolutely no guarantee of pro success. Young players, sometimes with agents, were working out other paths to pro glory.

Surprisingly, among the organizers of alternatives to college soccer was none other than ... MLS. Toward the end of its initial 1996 season - and just six months after it had touted its first college draft - MLS announced the Project-40 program. A program that was clearly designed to keep the top youth players in the country out of college soccer.

Forty of these top young players would be identified, then 30 of them would be offered pro contracts with MLS. This was surely a colossal slap in the face for college soccer. It meant the top youth players in the country would not be going to college, and so would not be part of any college draft.

As it happened, 1996 was also the year that I gave up on college soccer. I think that’s the honest way of putting it. I was by now firmly convinced that it could never play any role in the development of pro quality players. I attended my last Division 1 tournament, got myself put on probation by the NCAA for using a four-letter no-no during a press conference, then watched as New York’s St.John’s U, with its zippy multi-ethnic team, beat Florida International 4-1 in an excellent, attack-oriented final.

I’ve watched the Division 1 final four tournaments on television since then and have found them, on the whole, dull, defensive low-scoring bores.

The three-year reign of Stanford, from 2015 to 2017, had me wondering: Is this Stanford team demonstrably better than Harry Keough’s St.Louis teams back in the 1970s? Not easy to answer -- trying to match up teams from different generations is rarely satisfactory. But I can say this: Keough’s teams never bored me. Stanford managed, consistently, to do that.

My view of men’s college soccer is that it has sunk into a rut and is barely worth watching. There is no way forward for such a sport. It can -- and does -- move sideways, from one typically unimaginative, typically college, team to another.

The question that rises is this: Do things have to be that way? Surely there must be a way of injecting life, reality, relevance, purpose into this currently drifting activity?