The youth soccer landscape’s fragmentation accelerated when the Development Academy launched in 2007. With the DA gone, clubs had an opportunity to come together under one umbrella, bringing in just enough teams to knock down travel costs without diluting the talent pool too much.

“Get together, let's not come out of this with the same structure for youth soccer,” urged veteran coach Lisa Cole on Twitter.

So far, though, it seems Humpty Dumpty hasn’t been put back together again.

Whenever youth soccer resumes, the one constant remaining will be the ECNL, though that league will have substantially grown. In boys’ soccer, the ECNL started in 2017 and now includes roughly 30 clubs with former DA programs to its ranks, but MLS also is filling the Development Academy void with a large league of its own. (The USL also is rolling ahead with its planned academy league, overlapping with other competitions.)

In girls soccer, the ECNL was the league with the head start, serving as the de facto top league through most of the 2010s. The girls’ DA launched in 2017 and was never able to entice all of the top clubs away from the ECNL, and with the DA’s demise, the ECNL is bigger and better than ever.

But another new league, the Girls Academy League, has also jumped in to snag many former DA clubs and filled out its ranks with clubs from the NPL and U.S. Youth Soccer leagues. The GA (please don’t call it “GAL”) has grown out of the Development Player League, which has many DA clubs’ second teams along with a few third or fourth teams and a couple of non-DA clubs. The DPL will continue to operate and is adding at least three clubs -- two GA members and one from outside.

So on the surface, it looks like little has changed. In girls soccer in particular, we once again have two leagues chasing the top clubs in the country, trading one turf war for another.

But ECNL President Christian Lavers is as optimistic as ever -- perhaps more so. He sees the ECNL now firmly entrenched as the country’s top girls league, with the opportunity to add enough clubs to alleviate travel concerns.

“I don’t think we’ve traded turf wars at all,” Lavers said. “I think this is evolution, and I think there are two different levels of play, and I think an objective observer would not compare the average level of play between the two leagues.”

Going by rankings data, which always has to be taken with a grain of salt, Lavers is right. SoccerWire has calculated the top clubs in the country based on data from Youth Soccer Rankings, and the ECNL has the lion’s share of the top level.

In the top 20, the GA has the sprawling Southern California club Legends FC, Atlanta club Tophat SC, another SoCal power in Beach FC, and Northern Virginia club TSJ FC Virginia. The San Jose Earthquakes have closed their academy. The other 15 were already in the ECNL (New Jersey club PDA, Michigan Hawks, Atlanta’s Concorde Fire and more SoCal clubs) or moved over from the DA (So Cal Blues, San Diego Surf, Real Colorado and FC Dallas). The No. 1 club in the rankings, Solar SC of Dallas, had teams in the DA and ECNL and has simply retained its spot in the ECNL.

And the ECNL has an impressive geographic spread, even in difficult areas. Getting a critical mass in Southern California, Northern California and the I-95 corridor in the Northeast isn’t difficult, but the ECNL also has clusters in Utah, Colorado, Arizona and other places with low population density. The league has done this without diluting its competition level, taking all but a couple of its new clubs from the DA.

The ECNL also is bulking up a second tier of regional leagues that will have a lot of ECNL clubs’ second teams along with some clubs with the potential to break into the top ranks. Within a season, teams from regional leagues can play their way into the NCSL’s Open Cup, the fourth tier of the organization’s national championships. At a macro level, regional clubs can move into the ECNL proper.

“The ECNL regional league platform is designed to be a proving ground,” Lavers said. “Clubs that are not members of ECL can play and prove their performance at a known level of competition.”

The GA currently has no such structure, but for a league that had to build itself nearly from scratch in a matter of weeks after the DA’s demise, the GA has a solid collection of strong clubs. Southern California has more than enough clubs for two elite leagues. The Mid-America conference adds U.S. Youth Soccer National League regulars such as SC Wave (Wisc.) and Beadling SC (Pa. West) to a gaggle of former DA clubs around the Great Lakes.

Also, the GA is enlisting its players to map out the league’s vision, surveying clubs to get player input. Like the ECNL, clubs will be allowed to let their players compete in high school soccer.

So we’ll have two interesting leagues whenever COVID-19 recedes far enough into the ether to let us all back on soccer fields. Still, when we look at a map plotting out all the different leagues (click on the map to find all the teams) and a spreadsheet of hundreds of youth clubs, it’s easy to see some regions that could benefit from some mergers. 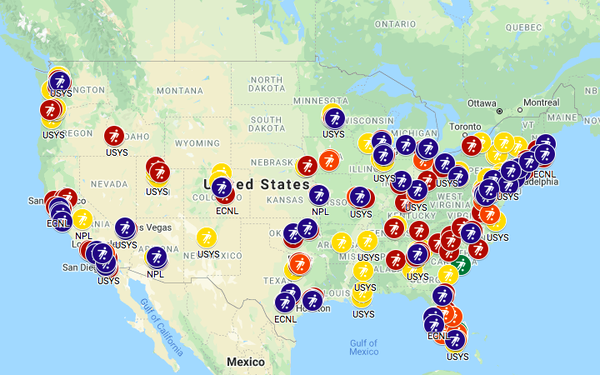 The big opportunity that’s lost by keeping up multiple leagues is addressing travel when that topic desperately needs attention. The economy will force clubs and parents to rethink their spending priorities. A lot of families are losing paychecks, and they’re not coming back to play travel soccer if it’s as expensive as it’s been for the last decade. Clubs won’t have the wherewithal to provide financial aid for everyone who needs it.

When a club or parent is looking at a travel soccer budget, travel is the easiest cut to make. Fields, fees and uniforms aren’t easy to trim. Clubs could but probably won’t go with more volunteer parent coaches instead of paid pros.

Travel costs time as well as money, wasting resources that could be better spent elsewhere. Players don’t get better at soccer in a car or on an airplane.

So even with the girls’ ECNL expanding to provide a critical mass of clubs in many areas, we have a few islands on the U.S. map. The GA’s Colorado Rush is isolated far from its league-mates, surrounded by four ECNL teams (Real Colorado will enter two teams) and close to three National League clubs. Western Pennsylvania has Beadling in the GA and the Pittsburgh Riverhounds in the ECNL, who’ll miss out on playing each other and a couple of strong U.S. Youth Soccer clubs in Northern Steel SC and Century Gold.

But this is just Year 1, and it’s taking place while the youth soccer landscape has been shaken up by COVID-19 and the demise of the DA. Things may look different in 2021.

“It’s all going to sort itself out over the next year,” Lavers said.
ecnl, u.s. youth soccer, youth
4 comments about "Girls soccer landscape, shaken up by COVID-19 and DA's demise in 2020, may look different again in 2021".
Read more comments >
Next story loading