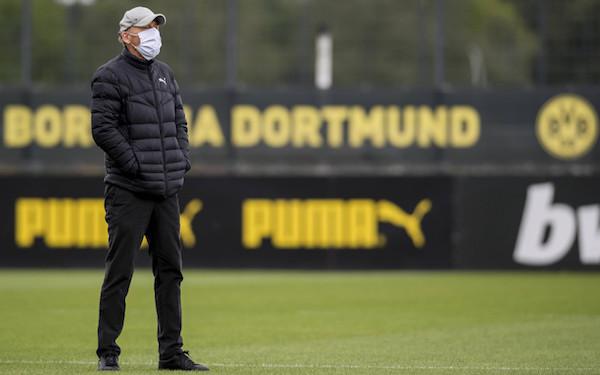 The Bundesliga season restarts behind closed doors on Saturday. The effectiveness of the protocols and game-day rules the German league has introduced will be watched closely by health authorities around the world to determine whether other sports leagues can resume.

A maximum of 300 people will be permitted at the stadium. They are divided into three zones:

-- No mascots will be allowed in the stadium. That includes Hennes, the Cologne goat who will miss a game the first time in 12 years.

-- Borussia Moenchengladbach will place 12,000 cardboard cutouts of fans in the seats of its home stadium, Borussia Park, when it hosts its first home game on May 23.

-- Extra police will be on duty in Dortmund for Saturday's Revierderby against archrival Schalke 04. Fans are being asked to refrain from marching to the stadium or gathering outside. Police chief Gregor Lange urged that fans prove that the decision to restart the Bundesliga was not a mistake.

The players and staff will be tested twice a week. One of the tests takes place the day prior to a match. Each test consists of two samples -- nose and throat -- and the results are given to the team doctor the morning of the match.

Five substitutions per game will be permitted. Under the special measures recommended by FIFA and approved by IFAB, these substitutions can be made at three breaks in the game or at halftime.

-- For German viewers of the Sky Deutschland broadcasts, they will have the choice of listening to the natural noise or recorded crowd noise, including singing by the two supporters of the two clubs.