The vital street soccer ingredient -- that early freedom to mess about

How the new era of American youth soccer will or should unfold after the coronavirus interruption has reignited discussions covering all facets of children's experiences on the soccer field. This article by Paul Gardner  ran in an April 1991 issue of Soccer America.

There is nothing so enjoyable -- according to author Kenneth Grahame  (Wind in the Willows) -- as "simply messing about in boats." As one who has been known to get seasick standing on the shore merely looking at a boat moving gently up and down, I'm not so sure about that. 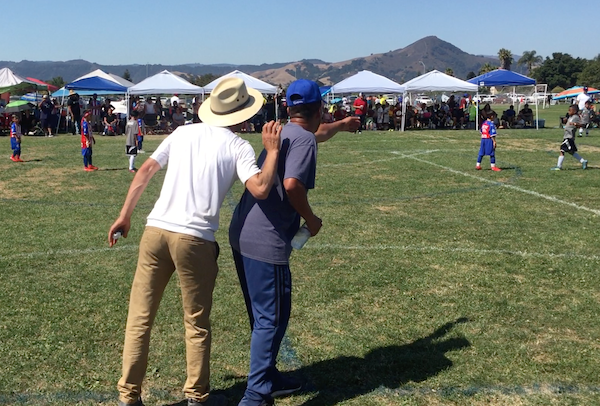 But I think I know what he was getting at. This is the same thought that Jerome K. Jerome came up with in Idle Thoughts of an Idle Fellow: “It is impossible to enjoy idling thoroughly unless one has plenty of work to do.” What he was saying was that we take things too seriously -- and that in so doing we end up getting them wrong.

Maybe things would go better if we just allowed people to "mess about." To enjoy themselves.

So there's the connection to soccer (in case you were beginning to wonder). Because we hear so much talk from so many involved people about the curse of overcoaching of young players. Why can't we just let 'em play? has become a theme of youth soccer. Almost everyone seems to think it's a marvelous idea. When was the last time you heard anyone defend heavy coaching for kids? Any one making such a stand today would be tarred and feathered and employed as a halftime attraction at an indoor game.

Yet ... if nobody would dream of overcoaching, why do people keep complaining about it? Because it does indeed go on -- perpetrated by people who are quite sure they are not doing it. Adults, of course -- straying into a child's world that they no longer understand.

Look at that phrase of Grahame's -- "messing about." It implies childishness. And childishness is always a word that we use in a pejorative sense -- even when we apply it to children. Messing about is childish. It is unproductive. It is a waste of time. It must not be allowed. It is wrong.

But again, no one really expresses matters like that. It is simply that adults always feel they know better, that they can improve things, that by butting into the children's world they can help the little ones. That, by making play more sensible to the adult mind they make it more enjoyable to the child mind.

So the adults -- with the best of intentions -- interfere. Put another way -- the coaches overcoach. Structure rears its ugly, inevitable head and messing about is banished. Children, I guess we would all agree, love to play, need to play. I don't necessarily mean at soccer, I mean just playing at anything. We agree -- but do we know what we mean?

What is play? Play is "activity engaged in for amusement or recreation; sport, games etc; often, specifically, the natural activities of children." That's what my dictionary says. I don't know that that gets us much further, any more than the knowledge that play can be classified as "biologically irrelevant or useless" behavior.

More to the point is the obvious fact that play has something to do with laughter and fun. In her Psychology of Play, Dr. Susanna Miller has this to say: "Freedom of choice, not being constrained by other people or by circumstances is a hallmark of play ... lack of constraint from conventional ways of handling objects, materials and ideas, is inherent in the concept of play."

It is, I think, that lack of constraint that leads -- in the eyes of adults -- to the dreaded messing about. A child must not be allowed to build his pyramid starting with the apex downward, I mean that's just plain silly, it must be explained that he's got it upside down. Must it be explained?

Can not the child be left to find that out for itself? Is there anything more typical of childhood, more downright childish, than the wish to explore, to find things out? And is there a better way of learning than by exploring and experimentation? Does the fact that an adult knows certain things won't work entitle him to take away from the child the beauty of working it out for himself? To deprive the child of the wonderful excitement of discovery? 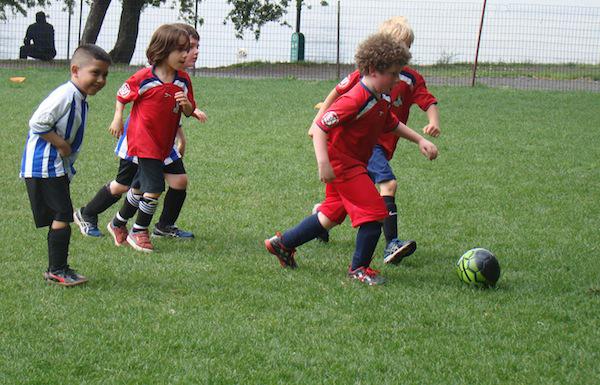 I'm talking in general terms, but the soccer connection is obvious. The soccer child should be allowed to mess about with the sport. Do what he likes with it. Explore the possibilities, shape them to his own abilities and to his own personality. If he doesn't have any feeling for the sport, well, he shouldn't be a soccer player, probably never will be one. That is not a crime. The crime is to insist he keep playing when he's not interested.

The young soccer player does not need -- is greatly inhibited by -- the presence of an adult telling him what to do and what not to do. And that is what coaches most often end up doing -- however much they may protest otherwise. As I said earlier, it is all done with the best of intentions. But should it be done at all?

Consider the matter of street soccer. There seems to be a consensus in soccer these days that street soccer is the best way to produce players. Or used to be. Trouble is that with modern highways and traffic jams on the one hand, and a hundred competing recreations on the other, we don't have much street soccer any more.

Not to worry -- we (read "the coaches") will simulate street soccer. Not a bad idea at all -- after all, what other choice do we have? But being coaches, being imbued with the teaching, technical approach to the game, they promptly get it wrong. Street soccer must first be analyzed (in a technical sense, of course) to find out what makes it tick.

The answer is obvious, clear to everyone. More touches of the ball. The teams are, we are told, smaller so each player has more ball contact. Hmmm. My memories of street soccer involve what I recall as hordes of uncouth monsters. That was why I used to arrive early, to play with just a few kids until the older boys arrived and the teams got bigger and bigger. At that point, if you wanted any ball contact at all, you had to work bloody hard for it.

Or have you? I have a feeling that the coaches have ignored the vital ingredient of street soccer. The fact that it was never really seen by the participants as anything more than messing about. Sure, plenty of good players started that way -- but did they take part with the attitude of "now for another training session that will help make me a better player and get me a job as a pro"? Huh! Messing about, and the fact that adults disapproved, was justification enough. 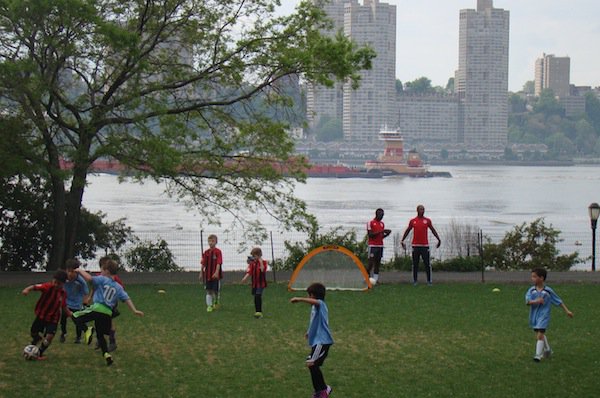 That second point is vital. I just cannot envision what sort of reception an adult, a coach, would have received had he turned up and tried to start telling everyone what to do.

Street soccer was kids messing about, they were enjoying themselves -- and they were learning in the best possible way. By doing more or less what they liked, by taking the criticism or the praise of the other kids, by finding out for themselves what worked and what didn't, what they could do and what they couldn't.

Sure, by that time, the world of constraints was beginning to close in, but there was still much left of the magical world of childhood fantasy and exploration. There were wonderful feats accomplished in those games, and it was mostly the personal skills that stood out. Team play there was, but it was a spontaneous sort of cooperation. It came not from any tactical plans, but from young players who were realizing that team play worked, that it was fun. Kids who developed an instinctive way of combining with other players. There was never, I'm quite sure, any deep thinking about any of this.

You can see, can you not?, what sort of player is going to develop from that sort of atmosphere. He's going to be skillful, and he's going to be willful. He'll know how to look after himself, he'll be confident, maybe cocky, because he's self-made and he's proved to himself that he can do it. He will have his own way of doing things. He will have learned to take responsibility for what he does, because no one else (well, no adult) has ever told him what he should be doing. He will have a unique, clear style. There will be a distinct personality about his playing.

I agree that a factor in all that will be "the number of touches" of the ball. But I do not believe it is the most important factor. Surely, it must be clear that you can bring up young players solely on small-sided games with an astronomical number of touches -- and that this is no guarantee at all that they will be players?

That early freedom to mess about, to be free of the crushing burden of adult wisdom -- that is the most important thing. Soon enough the adults, the coaches, will arrive with their deadly somber mission. They will then set about "correcting" things. The coach as Corrections Officer.

At what age one stops being a kid -- I'm not sure about that. But does anyone know? Clearly, at some point, coaching comes into the picture. But at what age? And what sort of coaching? We really don't know the answers to those vital questions.

All that we can ask of the coaches at this stage is that they stop behaving as if they do know the answers. It may, I fear, be asking too much. The whole inane structure of coaching courses and coaching badges, which get ever more complicated and ever more divorced from the reality of the game, is working in the opposite direction.

Mark ye my words, the day will come, verily it will, and probably quite soon -- when the USSF inaugurates a special course scientifically designed for youth coaches.

I shudder to think what will be taught in those courses. For I do believe that the best youth coaches are those who love the game, who love kids and respect them on their own terms, who will encourage and coax and chide and mock and laugh and gently nudge things along. That is all hopelessly unscientific, but those qualities are worth any coaching badge you can think of.

They are qualities that will really allow kids to play, to have fun. Or simply to mess about.

youth
8 comments about "The vital street soccer ingredient -- that early freedom to mess about".
Read more comments >
Next story loading