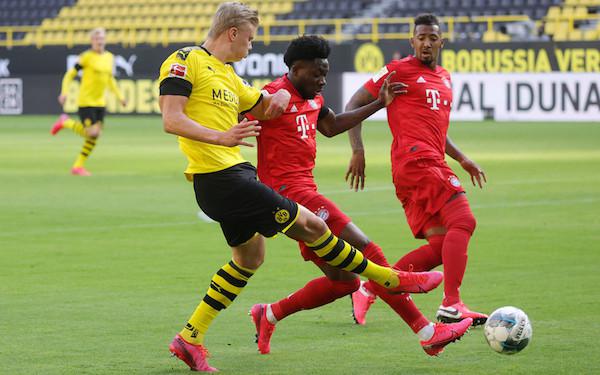 Bayern Munich moved closer to clinching its seventh straight Bundesliga title when it beat second-place Borussia Dortmund, 1-0, on the road to open up a seven-point lead with six games to play.

Career goal. A moment of brilliance from midfielder Joshua Kimmich was the difference as he caught Dortmund keeper Roman Buerki off his line -- as he suspected -- and scored with a lob from 20 yards to break the scoreless deadlock in the 43rd minute.

“It is not that I wanted to do this,” Kimmich said. “I did not see him off his line but we were told before the game that Buerki stands a bit off his line so I went for it and with a bit of luck it went in. It was maybe the most beautiful goal of my life and also very important."

Dortmund came into the game with 74 goals in 27 games, on pace to set a club record for most goals in a season, but Dortmund was shut out for the first time since the first meeting with Bayern in November, a 4-0 loss.

On one sequence, Canadian teenager Alphonso Davies chased down Dortmund's new Norwegian star, Erling Haaland, on a breakaway with an astonishing display of speed registered at almost 22 miles per hour.

"Sometimes maybe he is not in the best position on the field,'"Bayern forward Thomas Mueller said, "but he gets the opponent thinking, 'Oh, I have time, I have time,' and then, 'Meep, meep! Meep, meep!' The Road Runner, the FC Bayern Road Runner, comes and steals the ball."

Unbeaten since break. Bayern improved its Bundesliga record since the winter break to 10 wins and one tie in 11 games. The loss was just Dortmund's second to go along with nine wins.

“It will be very, very difficult," he said. "Seven points in six games. It will be brutally difficult."