Since COVID-19 put live sports on hold, we’ve had plenty of classic women’s and men’s international games on the airwaves. We’ve also seen news of an upcoming film based on the 99ers.

But nothing compares to a live game in person. Not when we’re talking about soccer. (Or hockey.)

Other sports may translate just as easily on TV as they do in person -- American football is best seen from many camera angles, basketball is contained in a confined space that can be easily captured on camera, and baseball is more palatable with the soothing voice of a broadcaster. (On that note: If you’re looking for more binge-watching, check out "Brockmire," in which no manner of ill can keep Hank Azaria’s baseball broadcaster from wowing us with his golden voice and encyclopedic brain.)

Soccer is best seen with a view of the whole field and best experienced in a highly charged atmosphere. One day, we’ll be able to do that again. We hope.

Fortunately, I’ve been privileged to see many great games live, particularly in women’s soccer. And in my quarantine-induced fit of nostalgia, I’ve come up with a list of the very best.

1990 ACC semifinals, North Carolina 5-0 Duke
No, it wasn’t particularly competitive, and it was difficult to maintain objectivity at the press table as I saw people I knew getting completely overrun and overwhelmed. One player was in tears at the postgame “press conference” -- a few folding chairs under a tent with me, my future Star-News (Wilmington, N.C.) colleague and current L.A. Times reporter Scott Gold, longtime ACC women’s sports reporter Jim Furlong and a couple of kids trying to get a player’s phone number, all sitting across from players and coaches.

But I had to marvel at the team I’d just seen. Mia Hamm raced past fast Duke players, and she and Kristine Lilly simply sliced through my classmates with precision I’d never witnessed up close.

Then Anson Dorrance walked into the tent and was as gracious as he could be. If an early Duke chance had found the net, he said, it would’ve been a completely different game. I didn’t buy it -- after all, Duke scored first against UNC in the NCAA final two years later and got steamrollered 9-1 -- but it was nice of him to say.

My Monday story said nearly as much about Duke’s 6-0 win in the quarterfinals than the semifinal romp. Scott’s story focused on North Carolina’s appearance in the final. Guess who won.

1996 Olympic final, USA 2-1 China
This game took place a little more than a mile from my childhood home on the field in which I once trotted out in a football uniform.

In most Olympics, the soccer games start out at far-flung venues but end up in the main host city. Not this time. I was born and raised in Athens, Georgia, not Atlanta and not within 50 miles of Atlanta. We’re known for R.E.M., the B-52s and the Georgia Bulldogs, whose home venue of Sanford Stadium hosted the game.

The crowd didn’t quite fill the gargantuan stadium, but the attendance count of 76,481 was credited as a new record for a women’s sports event anywhere in the world. Women’s soccer may not have had the knowledgeable fan base back then that it has today, but the atmosphere didn’t suffer.

I was there as a fan, perched about 30 rows back along the top of the 18, giving me a perfect view of two goals. The first was Sun Wen’s chip over Briana Scurry to equalize in the first half. The second seemed to unfold in slow motion -- I saw the whole play develop as Tiffeny Milbrett found empty space to run on to Joy Fawcett’s cross for the winner.

1999 Women’s World Cup, USA 3-2 Germany
At halftime, I stood on the concourse of Jack Kent Cooke Stadium, the soulless suburban home of Washington’s NFL team. I was out of breath, and I hadn’t been running. The tension was too much.

It was never fair to pin the fate of their sport on the backs of one team, but that certainly seemed to be the case. The World Cup had been a success, giving me the privilege of gloating to the guy who scoffed at me in the Knight Ridder Tribune conference room when I suggested that we do some special coverage of the event. But a loss here would’ve stopped that momentum in its tracks, and the USA had just fallen behind for the second time -- first when Brandi Chastain rolled a ball past Briana Scurry as defender and goalkeeper miscommunicated, second when Bettina Wiegmann fired a missile over Scurry.

Chastain scored at the other end early in the second half, and the USA wasn’t going to lose from there. Fawcett’s header clinched it. I didn’t exhale until the final whistle, but I recovered in time for my wedding a few weeks later. 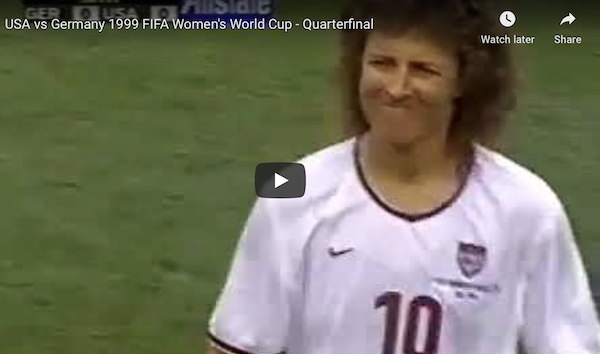 2004 exhibition, Washington 1-1 New Jersey
The WUSA was gone, but the Freedom lived on, with Jim Gabarra keeping as many players in the fold as he could. The New Jersey Wildcats, with Charlie Naimo on the sideline, had landed French star Marinette Pichon and one of the best players of all time -- England’s Kelly Smith.

The crowd at the Maryland SoccerPlex was several times smaller than the 2001 WUSA opener attended by 34,148 people and one screeching eagle at RFK Stadium, but the soccer was more fun to watch than the dreary, incoherent display three years prior. Watching Smith work from a close vantage point was, like seeing Mia Hamm in 1990, a revelation.

Kevin Parker wrote a brief history of the 2004 Freedom that included an RFK appearance by a young Ali Krieger.

A couple of hours later, Brennan was nudging me with a smile to remind me I was wrong.

Forget the “I would’ve made those saves” controversy of the 2007 World Cup. Briana Scurry was certainly rusty, but you can’t pin all four Brazilian goals from that game on her. The U.S. women were second best that day, and it wasn’t close.

On paper, the matchup was even worse this time around. Abby Wambach had a broken leg. Kristine Lilly was pregnant. Aly Wagner, who too rarely had a chance to show off the playmaking skills not usually seen in U.S. soccer, was on the roster but wasn’t all the way back from hernia surgery.

But Heather Mitts, who also suffered far too many injuries in her career, was there. Mitts, Lori Chalupny and the rock-solid center-back pair of Kate Markgraf and Christie Rampone kept Marta and Co., in check. Solo was also exceptional and came up with one save for the career highlight reel, but she wasn’t under siege the way Scurry had been a year before.

Chalupny wasn’t necessarily a left back in typical circumstances. Neither was Angela Hucles a starting forward. Pia Sundhage made it work. Sundhage didn’t quite go all-out defense as she did eight years later, when she was on the receiving end of Solo’s ire, but for one game at least, defense -- and Carli Lloyd’s speculative but well-placed shot -- won a championship. 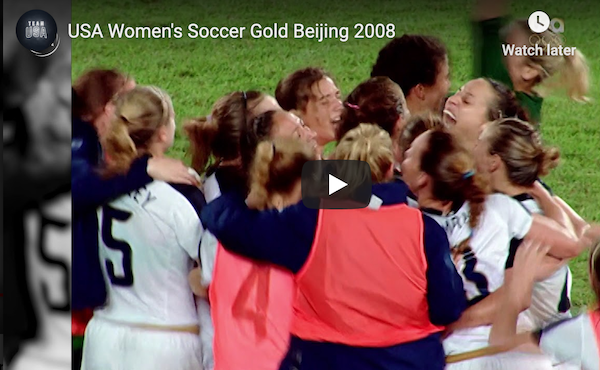 For 90 minutes, it was going to be the former. After a two-goal outburst in the 90th minute and stoppage time, New Zealand made it the latter.

Ferns captain Rebecca Smith, a Duke alum who played in Germany with Wolfsburg at the time and conducted postgame interviews in fluent German, scored the first. Then Stanford alum Ali Riley floated a cross for target forward Hannah Wilkinson, who shook off a collision suffered a minute or two earlier to score the equalizer.

A New Zealand journalist told me it was one of the happiest days of his life. And when it was done, the Ferns did a triumphant version of the haka. 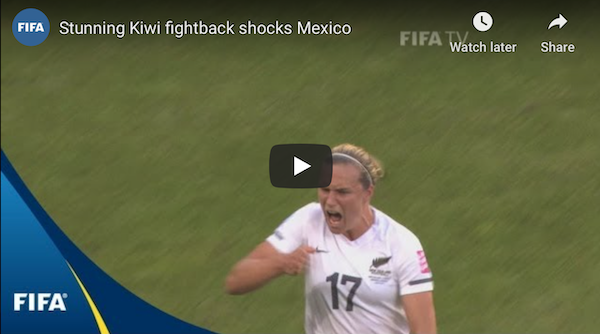 2011 WPS final, Western New York 1-1 Philadelphia (WNT 5-4 on PKs)
The game was so eagerly anticipated that a squirrel decided to get a close-up view, racing around the field for an amusing interruption in an otherwise tense battle for what turned out to be the last gasp of a flailing league.

The Philadelphia Independence, drawing their inspiration from Coach of the Year Paul Riley and Player of the Year Vero Boquete, had ousted the star-studded magicJack team in the semifinals, saving WPS officials the possibility of presenting a trophy to Dan Borislow after a season of skirmishes that would land the parties in court. The Flash had a team that would rival today’s expensive Lyon squads -- Riley, Marta, Christine Sinclair, Caroline Seger, Whitney Engen, Yael Averbuch and a few others who either were or would be representing their country.

Sinclair broke the stalemate in the second half. Amy Rodriguez tied it late to give Philadelphia momentum heading into overtime, but the Flash’s stars simply would not miss their penalties. Philadelphia matched them until the last kick, when rising goalkeeping star Ashlyn Harris got a good read on the ball and punched it away to start the celebration in Rochester.

2018 NWSL, Washington 0-1 Portland
Not the best game in Washington Spirit history in terms of what happened on the field, but it was a statement game in another sense: The Spirit went downtown, proving they can draw a crowd at Audi Field. 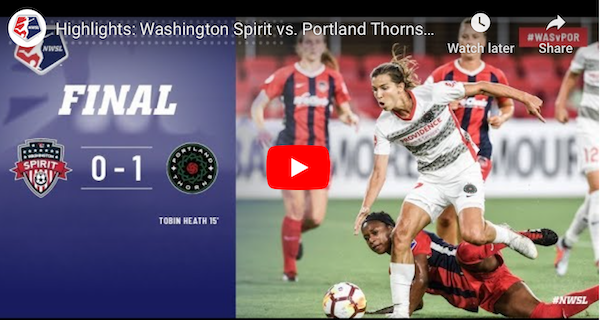 We can only hope it won’t be too much longer before they can do again.