The LA Galaxy issued a statement condemning a series of "racist and violent social media posts" by the wife of one of its players.

Tea Katai, the wife of Serbian midfielder Aleksandar Katai, posted two comments, the first "ma pobij  govna bre" in Serbian ("kill the s***") with a screenshot of a police SUV trying to push through a crowd of protesters in New York, and the second an image of a looter with boxes of Nike shoes and the caption "Black Nike Matters."

Both comments have since been taken down.

"Earlier today, the LA Galaxy were made aware of a series of racist and violent social media posts by Tea Katai, the wife of LA Galaxy midfielder Aleksandar Katai. The LA Galaxy strongly condemned the social posts and requested their immediate removal. The LA Galaxy stands firmly against racism of any kind, including that which suggests violence or seeks to demean the efforts of those in pursuit of racial equality.

"The LA Galaxy stand with communities of color, and especially the Black community, in the protests and fight against systemic racism, social inequality, bigotry and violence. The LA Galaxy will hold a meeting with Katai on Thursday, June 4 and will determine next steps.

"Now is the time to reflect on our role in helping fight racism in our community." A statement was later released by Aleksandar Katai: 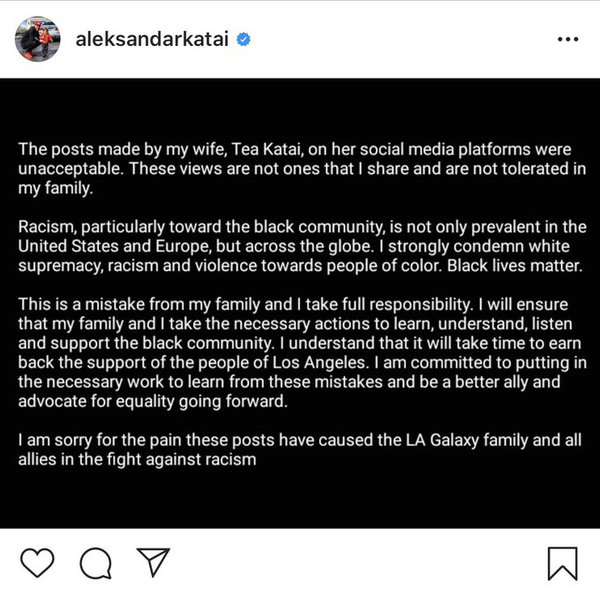