Ed Foster-Simeon: 'Soccer is a powerful vehicle for social change'

Ed Foster-Simeon is the CEO of the U.S. Soccer Foundation, which was launched after the USA hosted the 1994 World Cup and has distributed more than $125 million to support soccer organizations and field-building initiatives nationwide -- with an emphasis on underserved communities. 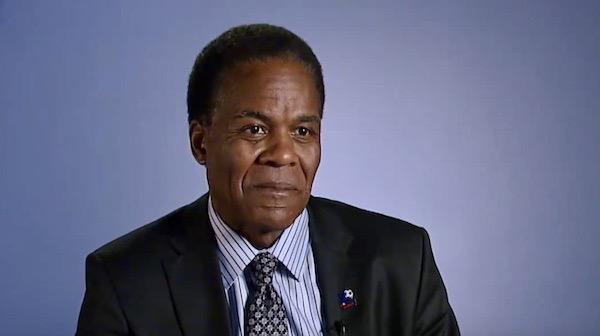 SOCCER AMERICA: How are you doing?

ED FOSTER-SIMEON: I'm exhausted. I cried over George Floyd more than once. I cried to know that a man was publicly killed by law enforcement officers in front of witnesses while pleading for his life.

It's very disturbing. I was a teenager in the 1960s when we went through a similar period of civil and social challenges and unrest. Since then, I've watched in my lifetime the slow arc of progress in this country for better racial equality and social justice. But I have to tell you, the last few years have been dispiriting. My heart aches with what I've seen.

It's like we're regressing. I'm an African-American man. I'm exhausted from fear for my children. I've got four kids. Three of them are sons and I live in quiet fear of their safety.

I’m very sad and exhausted because this has been the story my whole life.

SA: Do you see hope?

ED FOSTER-SIMEON: The upside of the George Floyd incident is that it was captured on video and everyone got to see it. To me that is important. And I'm hoping that this is a moment in our country where people just say, "This is not America. These are not the values of our country. This is not what we believe is just and right and fair."

In the 1960s when they were trying to pass the Voting Rights Act, we had “Blood Sunday.” Civil rights protesters were trying to cross the Edmund Pettus Bridge in Alabama and were set upon by the police. Congressman John Lewis was beaten bloody during that incident. And it was televised. The nation was shocked and worried to see the treatment of peaceful demonstrators. In short order, the Voting Rights Act was passed -- because you could not deny what you were seeing with your own eyes.

If many of these incidents weren't videotaped, people would explain them away. They would say, "He must have done something. There must have been some mitigating circumstances."

SA: What was your reaction to statements from American soccer leagues and organizations denouncing racism?

ED FOSTER-SIMEON: It's encouraging. Most people are good people. That's not the question. It's when good people stand back and allow bad things to happen that it's a problem.

I'm encouraged by all the statements. But at the end of the day, statements come and go. The question is, What are folks going to do? How can we change things?

Our organization, the U.S. Soccer Foundation, is engaged in low-income communities around this country and we're trying to figure out how we can do more. How do we double-down to help more kids? We're not on the pointy end of the social justice stick, we're just creating access and opportunities and connecting kids with mentors who can lift them up. But how can we do more?

Not only are they suffering under these situations like George Floyd, but the impact of the COVID-19 pandemic is hitting these communities hardest. Why? Because of the health disparities that existed.

“I played basketball, football, baseball. I didn’t get involved with soccer until my kids did, and one thing I’ve taken away is that the sense of community around soccer is just incredible and unlike any other sport. It's spread across cultures. It's universal. There’s something about this game that's unifying, that brings people together from all kinds of backgrounds. That's the power of our sport. It is emblematic of where we want to go in this country right now.”

-- Ed Foster-Simeon’s children’s soccer-playing led to him becoming vice president of the Virginia Youth Soccer Association and president of Prince William Soccer. Before joining the U.S. Soccer Foundation board in 2004 and becoming CEO in 2008, Foster-Simeon served as Deputy Managing Editor at USA TODAY.

SA: The disparities in the USA are reflected in children’s recreational opportunities as well …

ED FOSTER-SIMEON: The value of sport is getting kids to lead healthy, active lifestyles. Sports help teach critical life skills -- how to win, how to lose. How to overcome disappointment. Perseverance. Grit. All those things that help make healthy, productive citizens.

Well, not all kids get the opportunity to do that.

Think about the fact that low-income neighborhoods are four and a half times more likely to lack recreational facilities. That 81 percent of kids in poverty are not playing organized sports. 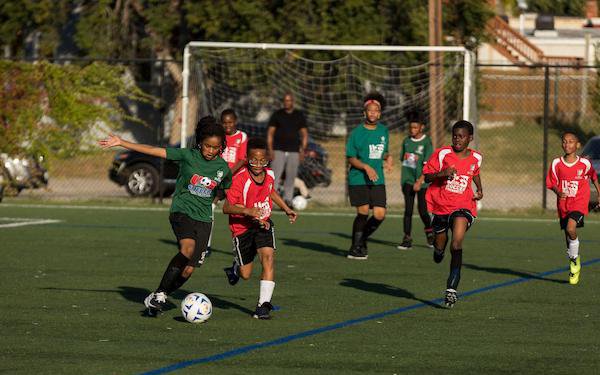 SA: When we spoke last year, you provided an update on the progress of the U.S. Soccer Foundation’s quest to build 1,000 small soccer fields in urban areas and under-served communities that lack playing space …

ED FOSTER-SIMEON: Soccer is a powerful vehicle for youth development and social change. It has been before the Foundation.

Soccer is about as egalitarian a sport as there is. Boys and girls play equally. You don't have to be a genetic oddity in terms of height or size to play. It doesn't take much -- a ball, some space, a safe environment -- to play.

So, yeah, our sport has a powerful role to play. And it's a unifying role.

Do we feel good that, during the previous school year, we were able to engage close to 90,000 kids and create access and opportunity for those kids at no charge and that they're getting health benefits from it, that they're connected to a coach mentor who's helping guide and lift them up? Yeah, we feel good about that. But that's just a drop in the bucket in terms of the overall need.

All kids should have access to the opportunity to play. And we sometimes forget the big challenges in the communities that are in most need.

ED FOSTER-SIMEON: Parents are working multiple jobs just to make ends meet. This idea that, oh, why don't they just volunteer to coach? Well, because they're working. They're taking public transportation to get back and forth to work and working multiple jobs. And they don't have the resources that we have. They don't even have safe places to play in their communities.

I am encouraged that more and more people see the value of how our sport can play a role in driving positive change.

But when we talk about issues that have inflamed the country today, we're talking about race and equity issues. And that can be difficult for many people to get their minds around. But if we can't confront that that's what's happening, then we'll never get to a solution. COVID-19’s disproportionate impact on the black community and underserved communities is a direct result of equity issues.

And kids don't have access to opportunities to play sports. Those are equity issues, they’re systemic, and we have to figure out how we solve that.

It can't be that it all rests on a charity like the U.S. Soccer Foundation to solve these kinds of problems.

SA: How concerned are you about the economic impact of the pandemic on the U.S. Soccer Foundation?

ED FOSTER-SIMEON: The concern is not just for our programs. Many pay-to-play programs will also face challenges. There's a significant amount of hardship around the country.

It’s difficult for everybody right now, but low-income communities are going to be the hardest hit and the slowest to recover.

SA: The 2018 lawsuit seemed to indicate that the U.S. Soccer Federation and U.S. Soccer were not working together as one would have imagined. Does last month’s settlement pave the way for a more cooperative future?

ED FOSTER-SIMEON: We're really pleased that that matter has been resolved. We're really excited to work closely with the federation and the new president, Cindy Parlow Cone. We're thrilled to be moving forward in a positive direction.

There's so much that can be done and so much that needs to be done. From where we sit, one and one should equal three. And that's what we're aspiring to.

We will work closely together to drive positive change for the game in our country. 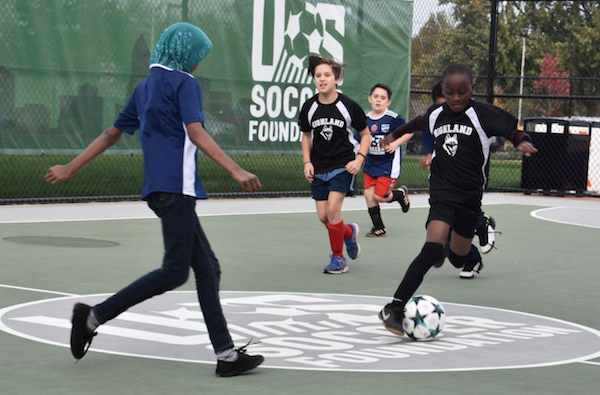 SA: Part of the foundation’s effectiveness has been to partner with existing organizations, right?

ED FOSTER-SIMEON: We made a very conscious decision that we weren't parachuting into these neighborhoods to tell people what they should do.

Our approach has been to connect with existing organizations, whether it's sports organizations or not, and the folks who have the greatest influence and understanding in communities and then give them the support they need to provide programming and access.

When we first started, we were just focused on programming. We realized that there weren’t enough safe places to play or kids can't get across town to a safe place to play. That’s where mini-pitches became a concept for us.

One interesting result has been that when we surveyed landowners where we put in mini-pitches, 98% said their communities feel safer. We underestimate the value of a safe, green, lighted play space.

We don't create the leagues or travel teams. We create opportunities for kids who wouldn't otherwise have the opportunities to be introduced to our game, to learn the fundamentals, to play small-sided games in after-school environments.

The idea of driving around town, spotting a talented kid, giving him a scholarship and shipping him to a suburban travel club is not a long-term solution.

SA: What’s your advice to members of the soccer community who want to contribute to improving opportunities in underserved communities?

ED FOSTER-SIMEON: Well, I wouldn't be a good executive of a charity if I didn't say we need financial help with the U.S. Soccer Foundation. We raise most of the money that we provide to support underserved communities.

We have to raise 75 percent of our budget to do that work. If people are looking for ways to make a difference in underserved communities, we clearly would be thrilled to have any additional support.

For example, Washington State Youth Soccer and Illinois Youth Soccer have made significant commitments to underserved communities, stepped out in that direction, and are doing really good work.

There are plenty of opportunities for people to be engaged if they want to be engaged. And we're happy to share what we've learned.

These are very difficult, problematic times. But there’s an old expression: A crisis is a terrible thing to waste.