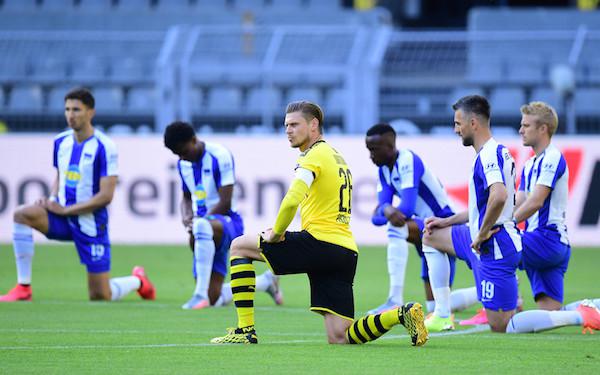 In pre-game drills, 17-year-old American Gio Reyna wore a black T-shirt with the words "No Justice, No Peace" over his yellow Dortmund warm-up uniform. Other Dortmund players wore T-shirts with the words "United Together" and "Black, White, Yellow, Red, Human."

At Bayern Munich's match at Bayer Leverkusen, Bayern players wore T-shirts with the words "Rot Gegen Rassismus" ("Red Against Racism"). During the game, they wore armbands with the words "Black Lives Matter" printed on them.

Bayern won, 4-2, to maintain its seven-point lead over Dortmund with four games to play in its bid for an eighth straight Bundesliga title.

After displays of support for George Floyd last week by American Weston McKennie, who plays for Schalke 04, and other players, the German federation chose not to punish them.