Will fans return to stadiums? German minister says it could happen sooner than expected 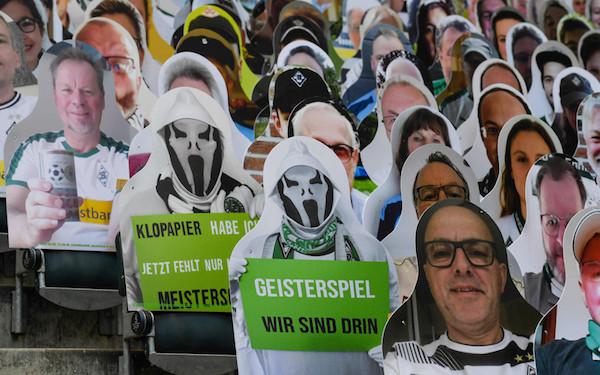 The German Bundesliga -- the first major sports league to resume play -- has played five matchdays, and there is already talk of ending the "Geisterspiele," or literally "ghost games," the term used to describe games played closed doors.

In late March, Christian Seifert, the CEO of the German league (DFL), said everyone should get used to the idea that fans won't be allowed in stadiums until the second half of next season, in 2021.

Solutions in the works. Now, an influential German minister says fans could return in the first half of the 2020-21 season. Interior minister Horst Seehofer, whose support for the resumption of play was critical in the green light the DFL got in early May, believes a solution can be found for fans to return to the stands on a limited basis.

"I already have the confidence in my heart that we will be able to gradually open up audiences again in the new season," said Seehofer (CSU) in an interview with the Funke Mediengruppe newspaper chain. "Not immediately, not like before the coronavirus outbreak, but with fewer spectators and so that the distances between the stadium visitors are kept."

Seehofer added that there were "clever solutions" to balance the fan experience and protect fans against infection by COVID-19.

German chancellor Angela Merkel has described the pandemic was the greatest challenge to her country since World War II and said the idea of “normal, social life and co-existence” is being tested “as never before." But positive cases remain low in Germany -- just 300 new cases in the 24 last hours compared to a peak of almost 7,000 at the peak of the pandemic in late March -- even after it was the first major European country to start to ease restrictions on social distancing.

The DFL is already working with fan groups on how stadiums could look when fans return, how tickets are distributed and what concessions would be available.

But Oliver Kahn, the former German goalkeeping great who joined the Bayern Munich board in January and is being groomed to succeed Karl-Heinz Rummenigge as CEO in 2022, warns that Bayern will only be allowed to welcome back a "fraction" of its fans, 10,000-11,000, in Munich's Allianz Arena, which seats 75,000.

"I'm an absolute friend of thinking about viewers again sooner or later," Kahn told Sky, the Bundesliga's TV partner, "but only as part of a sensible concept."

Since leagues started to open, Hungary was the first to welcome fans when 10,000 attended the cup final between Honved and Mezokovesd-Zsory. Honved fans ignored restrictions when they celebrated with players after the 2-1 win. For each occupied seat, no fans could sit in front or back, and three seats were kept empty between each occupied seat.

In Vietnam, where the coronavirus was largely contained, the V.League resumed to large crowds in stadiums, where there were no seating restrictions.