Bundesliga's road-win stats prove the power of the crowd

The statistics have always shown that, broadly speaking, home advantage is a genuine factor in determining the outcome of results. The first five rounds of the returning Bundesliga, with all games played behind closed doors, have confirmed exactly why playing at home is an advantage. It's nothing more complicated than the noise of the crowd. 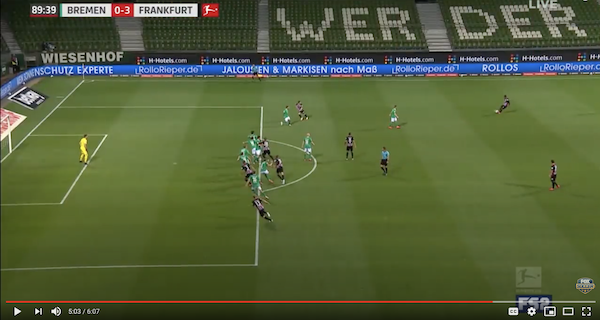 How can we be so sure? Because of the 45 matches played, only 10 have been home victories. There have been 14 ties, and 21 away wins. Those would be remarkable stats in normal times, but right now they're prompting no more than a murmur. The sleepy, training-ground feel to the 'Geisterspiele' is not just felt by the TV spectator. Clearly the lack of noise is affecting both teams too -- the home player is missing the crowd's motivational force, while the away player has been liberated from its scorn and bile.

The phenomenon is symbolized by Eintracht Frankfurt, a typically mid-standings team that -- up until the corona pandemic -- had a strong home record and a very poor away one. The club is also renowned for its fortifying fans who rock the rafters at home games and pump life into the old cliché about the supporters being The Twelfth Man. The current Eintracht team, say the experts, can push above its weight thanks to the power of the crowd.

Since those fans were locked out, however, they have played four home games behind closed doors (including one in the Europa League just prior to the shutdown), and managed just one tie and three losses. Away from home, meanwhile, they have doubled their tally of wins from two to four. The club's only road loss since the re-start was at Bayern Munich, where defeat is factored in anyway before the season even starts.

Like all sports, soccer is a game largely played in the head. Confident players will live up to their abilities simply because they believe in themselves. A run of poor form, though, even when attributed to a lack of fitness, is often exacerbated when a player's confidence has been shattered by a hostile crowd, home or away. In the eyes of the hyper-critical fan, you may only be as good as your last action, and recovery from the feeling that you've somehow 'lost it' can take months or even years.

Looked at scientifically, then, the absence of a crowd can be seen as creating a more level playing field. The players -- mere human-beings like the rest of us -- must no longer be subject to the savage bias of the paying spectator, whose self-interested agenda is often topped up by a brute ignorance of the game and the therapeutic need to vent a frustration that may have nothing to do with events on the field. Soccer without fans can therefore be analyzed more objectively, resulting in a more accurate gauging of a team or a player's true abilities.

But where's the fun in that? While we've quickly becoming accustomed to the empty bleachers, the canned noise, and the microphones by the bench picking up the caterwauling of the coaches and their entourage, I've yet to hear a player's post-game interview unfold like this: "You know what? I prefer the stretched-out perfection of the empty bleachers. I love the echo of ball on crossbar. And that guy in Row C always got on my nerves with his stupid bobble hat and striped scarf, yelling like a nutjob just because I've got the pace of a slug on Prozac. He needed to get a life, and I hope in the last few months he's finally got one."

This is all pre-amble to confessing that, to the surprise of no one in my family, I'm starting to miss the stadium. As long as there were no games, it was bearable. But seeing the vacant arenas and watching the many lackluster Bundesliga match-ups these past few weeks has made it impossible not to yearn for normality's comeback. I want to be part of the collective, feeling that my sporadic irrational roars aimed at the referee, or the left back who's just outrageously tripped my favorite winger, are somehow having an influence. That I'm a very tiny part of the fabled twelfth man whose cacophony -- in the minds of dreamers and the words of poets -- is pushing that ball across the line.

I want back my illusions, my make-believe world of points, goals, glory and withering disappointment. I want to believe that my team desperately needs me. If these stats are any guide, then perhaps it really does.