Tony Sanneh's extraordinary post-playing career: 'I knew I had to give back'

Years before retiring from a 17-year pro soccer career in 2009, Tony Sanneh  had planned out his next chapter. He would return to the Twin Cities of Minnesota and expand the Sanneh Foundation for underserved children that he launched in 2003. That work has become ever more crucial.

In early March, the teachers' strike in St. Paul, Minnesota, kept 37,000 children at home. Next came the coronavirus pandemic. More than 75 percent of children in the areas served by The Sanneh Foundation depend on the free or reduced price lunch program. When COVID-19 hit, the Sanneh Foundationstarted a "grab and go" meal kit program working with St. Paul food banks, providing free lunch and dinners.

On May 25, police killed unarmed George Floyd in Minneapolis and daily protests ensued.

"As I was marching today on University Avenue with hundreds of others, I could not help but think of history repeating itself, and how far we have come and how far we have not. It was a solemn march, led by a coalition of black churches, that put me back into the 60’s. I felt connected to those that have sacrificed so much, but I want to ensure that all the hard work, suffering and pain leads to long-lasting change. We can want change, but we have to be willing to change. I want to make certain that the cruel injustice Mr. Floyd experienced leads to change; it only leads to change if we change."
-- From the Tony Sanneh Statement on The Death of George Floyd.

In 1996, Sanneh scored in D.C. United's 3-2 victory over the Los Angeles Galaxy in the inaugural MLS Cup. Amid his 1999-2004 stint in Germany, Sanneh played every minute of the USA's five games and was one of the best right backs at the 2002 World Cup during its quarterfinal run -- the USA's  most impressive World Cup performance ever. Seven more years of pro soccer followed until Sanneh retired after his 2009 season with the Galaxy.

Early in his pro career, Sanneh played for the Minnesota Thunder of the USISL in 1995 for Buzz Lagos, who had also coached his youth and St. Paul Academy high school teams. Sanneh had connected at age 12 with Lagos and his sons Manny and Gerard when Sanneh's father, an immigrant from Gambia, saw Lagos' team training and asked him if Tony could join in.

Before that, the future World Cup player played his soccer in pickup games during the two years he lived in Gambia as a young boy and in his St. Paul neighborhood.

"The Thunder started inner city programs in Hmong and Somali communities, so Tony's always had ties with them," Lagos said. "He was always well accepted by the entire community. I think Tony wanted kids to have some of the same opportunities he had.

"He took advantage of a wonderful high school education and he finished college in four years at UW Milwaukee before he went pro. What he's done since coming back here and how he's grown that organization is incredible. Beyond the amount of money they've been able to raise, there's the enormous commitment he makes -- free camps for all the kids throughout the summer, the mentors they provide, the after-school programs, academic and athletic.

"He really studies education and does research, working on different models, finding the best way to get kids through the process. He has a great sense of that. A great ability to bring talented people into his organization. And the kids turn their lives around."

During his playing career, Sanneh supported anti-racism training at soccer clubs and began planning out how could work in the Twin Cities' underserved communities.

"I knew I had to give back," Sanneh says. "I knew I could leverage my celebrity and the things I had to make greater change. Once I decided to do that, I realized it wasn't the soccer itself but the relationships it built. So I went back to school to study developmental relationships because I truly believe that skill set brings the most change.

"Soccer is the commonality. When you're playing soccer, you forget black or white or Asian ...  It can be used as a common language and common bond in so many places. We appreciate the commonality -- the things that we all do -- then we also respect and celebrate the differences."

Sanneh also had entrepreneurial experience. While playing in the Bundesliga, he and partners opened a bar, Leibniz, in the Charlottenburg district of Berlin. He's been reflecting on Germany amid the racial strife in the USA.

"Germany I would say has made one of the greatest strides in the world during last 20 years," he says, "in their acceptance of refugees and embracing social justice and equity. Their professional soccer players knelt with Colin Kaepernick back when. They've really embraced social justice equity in what they do. But when I played there, they were throwing bananas on the field and making monkey noises."

As far racism in the USA:

"I think people of color learn to live with it and combat it when they can. But there's pent-up frustration. I'm more outspoken. I sued my state high school soccer league because kids were calling me the N-word and I wasn't allowed to report it. But those of us who are outspoken, we get labeled as troublemakers. Or we're considered intimidating.

"[The Floyd killing] has presented the perfect storm to make some systemic changes. I think and I hope that this causes us all to ask questions, to listen, and to be open to looking at things differently." 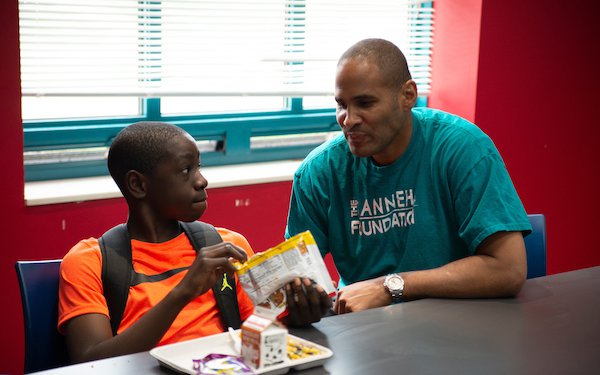 "Our intent as an organization, from the moment of inception, is to provide diverse youth with a community of supportive relationships and opportunities that recognizes both the inequities faced by youth from low-income families and communities of color, as well as their assets and potential - their value - which they add to our neighborhoods and communities."

-- From the Tony Sanneh Statement on The Death of George Floyd.

The Sanneh Foundation has 50 full-time employees and raises an annual budget in excess of $3 million. It stepped into to save the Saint Paul Conway Community Center and provides 85 hours of weekly programming throughout the Twin Cities.

Charles and Florvil emigrated from Cite Soleil, Haiti, where the Sanneh Foundation with FIFA Football for Hope's support created a year-round program in what is considered as one of the Western Hemisphere's most impoverished communities.

Sanneh has visited eight nations with the U.S. State Departments Sports Envoy Program and his work has including training police. In Haiti, police officers were skeptical about the four-day program Sanneh ran that connected them with the children in the community they patrol. The goal: Relationship-based leadership is better than fear-based.

"They said it would never work here," Sanneh said in "Futbol with Grant Wahl. "'Our kids are too hardened. They're all evil. They're stealing. You can't trust them.'"

On the last day the officers said: "They're so smart. They're our future. They have the best smiles in the world." And they started volunteering ongoing in the community of the kids they met in Sanneh's program.

"So we know there are places that are much more dangerous with much fewer resources where it's worked."

Back in the Twin Cities, Sanneh is hoping that the children will soon be back on the fields, gyms and classrooms.

"Kids are pretty resilient, but this is a really historic time of disruption in their lives," Sanneh says. "There's fear and uncertainty, which does a lot of negative things to a young person's body and mentality. They're isolated and scared."