Eric Wynalda is out as Las Vegas Lights head coach 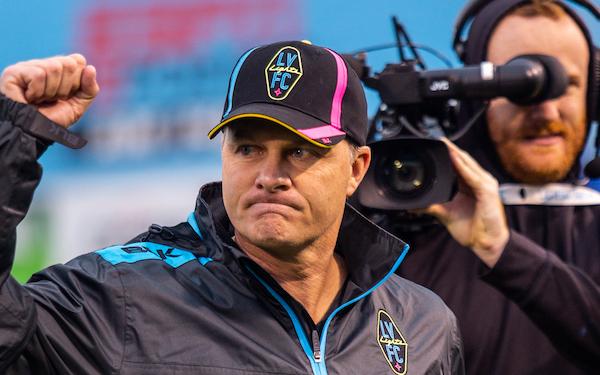 In a move that came out of the blue, Eric Wynalda is out as the head coach and technical director of the USL Championship's Las Vegas Lights.

Lights owner Brett Lashbrook told the Las Vegas Review Journal and ESPN that the timing of the dismissal wasn't ideal but he would not go into his reasons for making the move. He told ESPN he didn't begin the day "anticipating this, or wanting this to happen or knowing anything about this."

Lashbrook told the Las Vegas Sun that his decision was not related to finances or the coronavirus, but Wynalda told LVSportsBiz.com his departure was a mutual decision -- he expects to take a coaching job in Europe -- and came after Lashbrook wanted him to take a pay cut of about 70 percent:  “I wanted to make it about soccer. Brett Lashbrook wanted to make it a show. His ideology is different from mine. A lot of owners are under immense cost pressure right now.”

The National Soccer Hall of Famer was hired in October 2018 to turn around the Lights, who drew a lot of attention for their off-field promotions in their first season but finished in 15th place in the Western Conference with a 8-19-7 record. They improved to 13th place in 2019 with a 11-15-8 record.

Las Vegas tied expansion San Diego, 1-1, in its only game this season before the USL Championship was shut down because of the coronavirus pandemic. The league has set a tentative date of July 11 to resume play without fans at club venues.

In a recent Zoom call on Forward Madison FC’s Just Coffee with the Mingos, Wynalda said the Lights "were still embracing our identity and some of the crazy stuff that goes along with Brett Lashbrook, our owner, and some of the things he likes to do," but he was happy they were able to concentrate on the soccer side and proud they've put a good product on the field.

Wynalda coached Cal FC on its run to the U.S. Open Cup quarterfinals in 2012 and served as technical director for NASL’s Atlanta Silverbacks in 2013 when they won the NASL spring championship. In 2017, he coached the LA Wolves to a UPSL title.

"To have the chance to come back and build something in the city I love is truly a unique opportunity," said Wynalda, who ran for U.S. Soccer president in 2018. After his unsuccessful run, he did not return to Fox Sports, where he worked as analyst for 11 years.

Wynalda represented the USA at three World Cups (1990-98) and was named to the National Soccer Hall of Fame in 2004. He grew up in Westlake Village, California, but lived in Las Vegas for seven years following his retirement as a player.

He and his family moved back to Las Vegas after their home was destroyed by the Woolsey fire that swept through their Westlake Village neighborhood in November 2018.