The EPL's shaky return, and another goalkeeper victim

Alas for the English Premier League, usually so deft at promoting itself. Here we had the long-awaited (it’s been 100 days) return of EPL games to television. This was an emotional occasion, way beyond its soccer importance -- with all the players wearing “Black Lives Matter” wording on their shirts, standing in silence for coronavirus victims, then kneeling briefly before the kickoff.

Unfortunately for the feel-good atmosphere thus created, the appointed game turned out to be Aston Villa-Sheffield United. Hardly what was wanted.

Villa -- relegation candidates. Sheffield -- surely (one hopes) the crudest team in the EPL. As a fourth division game, this one might have had some merit. But as the Grand Return of the EPL Special, the game we’ve all been waiting for, it was an unmitigated disaster.

It may have set a record for players being knocked down, or passes going astray. Good -- even halfway decent -- soccer was no where to be seen. Neither team looked capable of crafting a goal, so it finished 0-0.

But even that was a travesty. Sheffield United did score a goal. A ugly one, of course. Villa scored it for them, when its goalkeeper grabbed the ball, then collided with one of his own defenders and staggered back into the goal, taking the ball with him. 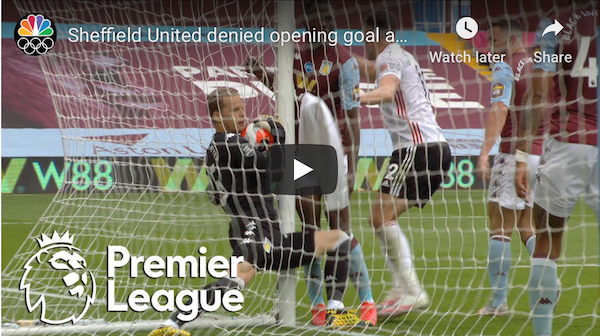 We got pretty good replays. For sure, the ball was over the line. Maybe referee Michael Oliver wasn’t sure about that. Time for VAR to step up. Nothing. After the game, the VAR people (not the VAR referees, but the techie people in charge of the system) gushed out groveling apologies. The sightlines of their cameras had been blocked by goalposts and defenders, so they couldn’t intervene.

The first time this had happened in some 9,000 games, it seemed.

Given that TV viewers had seen good replays, it sounded more like a feeble excuse than a believable explanation. Small comfort for Sheffield. Then again, Sheffield will know that it didn’t do nearly enough to deserve even this horrible goal, never mind to win this dreadful game.

So dreadful, that it’s quite impossible to dreg up any sympathy for the players, to excuse them on the grounds that they hadn’t played competitively for three months. Frankly, there were spells in this game when the players looked as though they’d never played the game before at all.

It was that bad. Poor soccer, and an embarrassing flop by VAR. But the EPL’s tarnished image regained some of its sparkle during the second game, Man City-Arsenal. Yes, there were suggestive signs of less than ideal preparation (Arsenal having to make two subs in the first half), and neither team looked exactly smooth.

Right on the stroke of halftime, Raheem Sterling got the first goal of the day, a neat buildup, and a cracking volley to finish things off. Any thoughts Arsenal may have held for a come back disappeared four minutes into the second half, when David Luiz (on as a first-half sub) pulled down Riyad Mahrez, giving away a penalty kick, and getting himself red-carded. Kevin De Bruyne scored from the kick, and Man City took over the game with their stylish attacking play.

Sergio Aguero came on late in the game and hit the post, the 20-year-old Phil Foden smacking home the rebound for the final 3-0 scoreline. 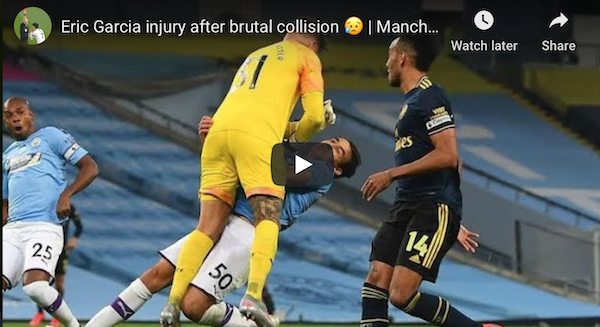 Things did not turn out so brightly for another of Man City’s youngsters, 19-year-old defender Eric Garcia. He was the victim of a violent collision ... with one of his own players. It hardly needs adding that it was his own goalkeeper Ederson, who, racing out of his penalty area to head the ball away, jumped dangerously and carelessly into Garcia.

It looked bad, very bad. Garcia stayed down, not moving. It took the support staff (nine of them) some 8 minutes to apply a neck brace and maneuver Garcia gently on to a stretcher. Surprisingly -- amazingly, really after such a heavy collision -- he was apparently not taken straight to hospital. “He’s conscious”, said coach Pep Guardiola, admitting that “We are very concerned.”

I’ll have a good deal more to add about this “accidental” collision. That is the word used -- emphasized -- by TV commentator Arlo White. I’m wondering why we got only one replay. Despite being discussed (though not analyzed) by the commentators, and by the studio panel, the incident was replayed only once, right after it happened.