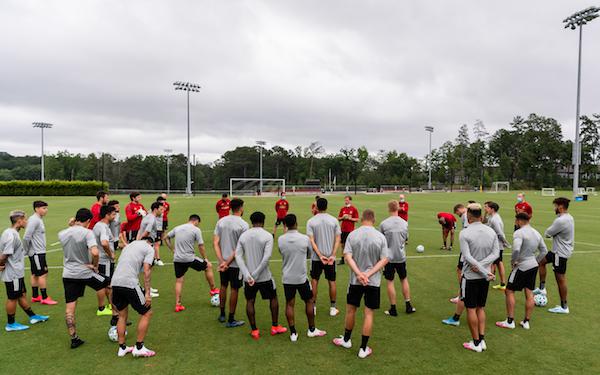 Atlanta United and Inter Miami announced on Thursday that they had a player tested positive to COVID-19, the first MLS players to test positive since their teams began full team training.

No other Atlanta United players or staff received a positive result. The player was asymptomatic and has been observing isolation protocols since receiving the result.

The Five Stripes will conduct testing Friday morning prior to resuming training in adherence with MLS health and safety protocols. They have been training at Children’s Healthcare of Atlanta Training Ground in Marietta since June 8.

In the case of the Inter Miami player, he tested positive for following a round of mandatory club testing this week. He was asymptomatic and has been observing isolation protocols since he self-identified being in close contact with an individual who showed mild symptoms during a health screening questionnaire administered daily to players.

Inter Miami began full training on June 10 at its facility in Fort Lauderdale.

Three other MLS players have tested positive, mostly recently a D.C. United player who tested positive ahead of the club's return to full team training on Monday.

Players weren't required to be tested for voluntary individual or group training sessions because social-distancing was maintained during the non-contact workouts. (Players were required to complete screening questionnaires and undergo temperature checks.)

-- All players and staff must complete two negative PCR tests 24 hours apart, 72 hours prior to the start of training, and undergo one baseline antibody test;
-- Players, coaches and select staff must complete PCR tests every other day and only those with negative results are allowed to attend training; and
-- Turnaround time for tests must be no more than 24 hours.

Here are the other three positive COVID-19 cases:

April 1.
Philadelphia. A first-team player tested positive for COVID-19, experiencing "mild symptoms," but "feeling well and in good spirits." The player was isolated, and no other player had cases or symptoms. Forward Kacper Przybylko later identified himself as the player who tested positive.

June 3.
FC Dallas. A first-team player tested positive for COVID-19, resulting in the suspension of voluntary individual player workouts "out of an abundance of caution." No player had been at the FC Dallas training facility for the previous four days because players were abstaining from voluntary workouts as negotiations on the league's collective bargaining agreement continued. FC Dallas started voluntary small group trainings on June 8.

June 13.
D.C. United A first-team player tested positive for COVID-19 following a round of mandatory testing administered to players as part of the protocol in advance of a return to full team training. United started full group trainings on Monday.