The Orlando Pride pulled out of NWSL Challenge Cup, which starts Saturday, after six players and four staff members tested positive for COVID-19.

All players and staff were asymptomatic but the decision was made for Orlando to withdraw from the nine-team NWSL tournament in Utah due to the number of positive tests and the timeline necessary before returning to training and competition. Following the NWSL protocol, a second round of tests will be conducted to confirm the initial results.

“We’re all obviously disappointed," said NWSL commissioner Lisa Baird, "but in the current environment, this is a situation that we have prepared for and we will now adjust our plans and schedules to reflect the circumstances."

Sources told The Athletic that additional testing was conducted after multiple Pride players visited a bar in Orlando. That led the first positive result and then other testing. Bars reopened in Florida on June 5, but some bars in the Orlando area have since shutdown in response to new COVID-19 outbreaks or out of caution. 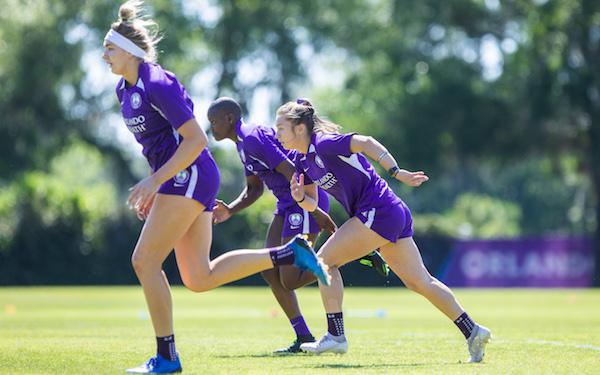 The Pride, which resumed training on May 8 (photo) after NWSL preseason was shut down in its first week in March, has taken the following steps:

-- The players and staff have received medical attention and will be isolated for at least 14 days;
-- Those who may have had close contact with the players, including housemates, have been notified and are being monitored for symptoms and will continue to undergo additional COVID-19 testing;
-- The Orlando Pride Training Ground, where the Pride trains, has also been closed and will undergo thorough cleaning and sterilization.

“This was obviously a difficult and disappointing outcome for our players, our staff and fans," Orlando Pride executive vice president Amanda Duffy said in a news release. "However, this is a decision that was made in order to protect the health of all involved in the Challenge Cup. While we were all excited to see the 2020 Pride on the field this weekend, our priority is now making sure our players and staff safely recover and providing any support wherever and however possible.”