Floridian goalkeeper Bryane Heaberlin starts for FFC Frankfurt, one of Germany’s oldest and most decorated women’s teams in the Frauen-Bundesliga. After playing for Anson Dorrance  at the University of North Carolina in 2012-2015, Haeberlin moved to Germany to join Turbine Potsdam and after two seasons moved to FFC Frankfurt. With the Frauen-Bundesliga having returned to play on  May 29, the 26-year-old has been one the few Americans playing professional soccer recently during the COVID-19 pandemic. 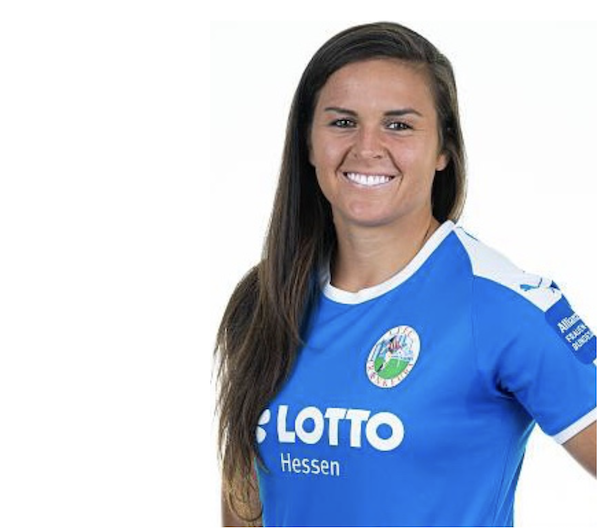 SOCCER AMERICA: How are you? What was the reopening of the Frauen Bundesliga like?

BRYANE HEABERLIN: I'm good! The restart for the Frauen Bundesliga was very interesting. Every team before the first game had to go in a week of quarantine. That meant we went to a hotel, ate there, trained there, and didn't leave the hotel for the seven days before a game.

SA: Does that mean your team all "bubbled" together?

BRYANE HEABERLIN: We could compete together, but we had our own rooms. Usually we share rooms. At meals, we had to sit two meters away from each other.

I kind of think the rules are a little interesting because we have to keep our distance and we can't sit with our teammates at meals and such. But as soon as we get on the field there's contact, sweating, and everything else.

BRYANE HEABERLIN: We played our first game and we were all allowed to go back home. We are technically in home-quarantine, which means very little outside contact. If you have someone who can go grocery shopping for you, that's what should happen. No gym, no dinner with friends, no cafes.

SA: How has that adjustment been for you and your teammates?

BRYANE HEABERLIN: It's been really tough, to be honest with you. It's a long span of time. This home quarantine started two weeks ago and it'll go until our last game, which is at the end of June. It's a month of not a lot of outside contact.

We're getting tested for coronavirus two times a week. That's a tricky situation because in the female soccer world, not every single player makes enough money from soccer to live on.

You have girls who are students or working, etc, which means that they can't work and they can't go to school because of the quarantine. We had a player who had to take a final exam for school. By leaving the quarantine, she couldn't play in our game.

It was a really important test and everybody understands why she took it. But the rules are just a little strange. We didn't have a goalkeeper coach the entire quarantine because he had to continue working.

SA: They're not allowing any exceptions?

BRYANE HEABERLIN: If you're a player you can't have any kind of "unsafe" contact with anybody. But the rules are the rules for everybody and so playing soccer with these rules is one of the securest jobs at the moment.

BRYANE HEABERLIN: We're getting tested via a mouth swab, twice a week.

SA: How much more of the season is there left?

BRYANE HEABERLIN: We have one game and one week left. We squeezed six games into four weeks.

BRYANE HEABERLIN: It's been interesting. We're having an “English week” right now; we played yesterday and then we'll play again Sunday. It's difficult. Here in Germany we were pretty much in lockdown for two and a half months. We didn't touch a ball for two and a half months. We came back and had a "preseason" — six weeks of training. And then we had our first game.

SA: What was the drop off in level like on the field?

BRYANE HEABERLIN: I would say that the first practice back after lockdown was ... comical. I don't remember the last time I took six weeks off from not touching a ball. That meant we were running and trying to do what we could in our living rooms. The first training back was a start at zero.

We were fortunate enough in Frankfurt to have started training really early. Other teams, like Jena, began team training a few days before its first game. They had to catch up.  That was because different states in Germany had different rules about reopening, so that was a complete disadvantage. And Jena happened to be one of the teams fighting against relegation.

SA: Is it the speed of play that suffers the most? Other areas?

BRYANE HEABERLIN: The speed of play and the team aspect. We had these rules with our training sessions like, only six players at a time, or no contact, or whatever the case was. There were all these rules.

I think a lot of these other teams didn't expect the league to start. So they're training sessions were pretty relaxed.

SA: What's it like to play in front of an empty stadium as a goalkeeper?

BRYANE HEABERLIN: I always make this joke: there aren't a lot of fans at female games anyway. But it does make a difference — at every game we’d usually have about 1,200 people there.

I would say the most difficult part about the games is not having loved ones and friends at the stadium that you can see. If your dad is there, you can see your dad. You can hear him cheering you on. It's pretty difficult not to have anyone there to cheer you on.

It's also super interesting, though, because it feels like training. It's super calm and you don't — or at least I don't — have pregame nerves anymore. We're training every day on our stadium field which is not normal and then we're playing games there. So it's the same as training.

It is awesome to be able to communicate with the players. But as a goalkeeper, you make a good save and the crowd cheers you on. That hypes you up. 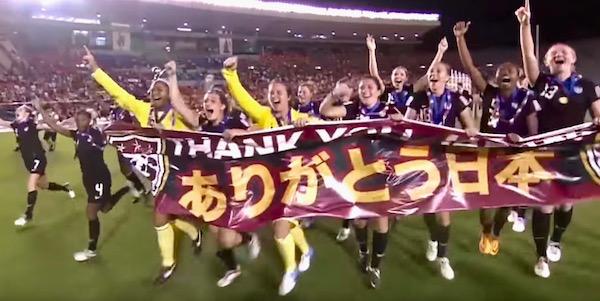 SA: Is there a sentiment that there's less at stake?

BRYANE HEABERLIN We have the possibility to finish the season on the field. There are still points on the table and of course you want to win the game ... but it is really a different atmosphere. I really would struggle if this was a consistent thing with no fans.

SA: Economic impacts of coronavirus on the Frauen Bundesliga?

BRYANE HEABERLIN: A lot of players feared that their salary would be cut, that they would get put on unemployment.

SA: Let’s talk about the club merger with Eintracht Frankfurt. How long has this merger been in the works? What are some positive and negative consequences?

BRYANE HEABERLIN: It's been in the works for quite some time. It seems like the logical next step. FFC Frankfurt is one of the oldest and most successful female German clubs. It's an impressive story and it's been built up from the bottom. Some amazing players have played for Frankfurt. Next season the Champions League takes three teams from Germany. With us becoming Eintracht, this could really help us with the support and infrastructure to grow as a team and chase that third position. [Wolfsburg and Bayern Munich have finished top two in the Frauen Bundesliga the past five years.]

Contracts will be better, we'll be scouting better players. We will play in the same stadium. I think it's a huge step and a massive move for female soccer in Europe. 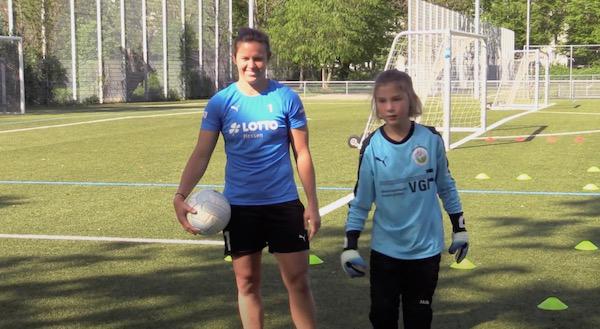 SA: Do you expect the merger to lead to bigger crowd size when fans can come to games?

BRYANE HEABERLIN: So on the men's side, the Eintracht fans are absolutely crazy. I've been to a couple games, and it's madness. So hopefully some of them will become fans for the women's team, too.

SA: How do you see the transfer market in women’s soccer changing in general due to the pandemic?

BRYANE HEABERLIN: Speaking from personal experience, if you're looking for a job right now, it's not the time. There aren't many teams willing to talk about transfers that weren't already in the works.

SA: The women’s game in Germany gets minor coverage compared with the men’s game. What can be done to raise the profile of women’s soccer in Germany?

BRYANE HEABERLIN: The more teams linked to the men's clubs, the better. It all comes down to culture. I've been here for five years and have grown pretty accustomed to the difference between the U.S. and Germany. If I'm in the U.S. and I tell someone I'm a professional soccer player, they immediately say, 'Oh! Do you play with Alex Morgan? Oh, do you play with the national team?' And there's all this hype. They're so into it and happy.

In Germany, the reaction is, "Oh ... can you live off of that?" Germany has an amazing national team. There's so much talent. Some of the best teams in the world. When I play against Wolfsburg, I say, "Wow, this is the highest level of women's soccer." And I also say, "This is close to a men's game."

It's hard to say, but I think Germans are a little old school when it comes to what a female should be doing.

SA: Most of Frankfurt’s 70 amateur clubs have no girls/women’s program. What will your club be doing, or what does it currently do, to encourage girls to take up the game in the city at grassroots level?

BRYANE HEABERLIN: I'm the current goalkeeper trainer for our U-17 team. I trained with boys teams up until I was 18. And I was the only girl who did that — it was practically unheard of. In Germany, I want to say that about 80 percent of girls coming to Frankfurt — 15, 16 years old — they all played for boys teams. In my opinion, that makes the best female soccer players.