The winter of 1946-1947 was, by general agreement, the worst of the century. In England, a critical coal shortage seriously threatened industrial production, electricity was in short supply, the socialist government, so sweepingly and triumphantly elected just 18 months earlier, was in danger of collapse.

And parsnips, a vegetable I am rather partial to, were in short supply because, we were told, it needed pneumatic drills to get them out of the frozen earth.

I was vaguely aware of all this, but it had little affect on me -- apart from the parsnip shortage, which was deplorable.

The date that really matters is Saturday, February 22, 1947. The day I nearly froze to death. This is how it happened.

I was at a soccer game - my usual Saturday afternoon entertainment in those days. What comes back to me so vividly ... well, so chillingly ... was the cold. I was 16, and I knew just about everything - well, you do, at 16, don’t you? But no one had told me, or maybe I hadn’t listened, that it could get this cold. At the North Pole, yes - but this was Stoke, in the middle of England. A First Division game against Arsenal.

One other thing. This was a unique occasion. My sister Ann, two years older than me and always so cheerful, ever smiling, had decided that she would like to come to a soccer game. With me. This was quite a surprise. Ann, and my mother and father, were all non-soccer people. Not that they were hostile, they just weren’t interested. 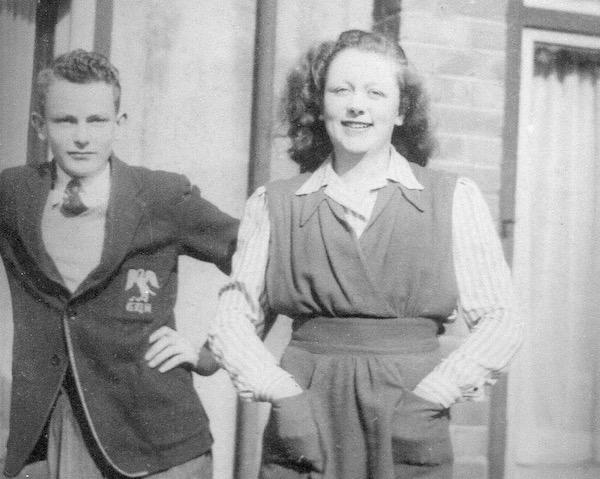 I sensed an opportunity for showing off. I certainly knew everything about soccer. Stoke vs. Arsenal was only a week or so away. Two top teams. I began to explain things to my sister, who listened patiently. After a masterly description of the game itself, I made it clear that Arsenal was the better team and would win this game.

That was nonsense. Stoke was the better team, I surely knew that. But the north/south divide is to be reckoned with in England. I’d been born way down south. Wartime evacuation had dumped me and the family in the Midlands, which I disliked. So I always opted for the south against the north. Which meant, conclusively, that London-based Arsenal was better than Stoke.

Having cleared that up, I then had to face the truth that my sister’s wish to attend this game was going to play havoc with my usual routine. Which was to enter the stadium through the turnstile marked BOYS, where you got in for half price.

At age 16 I was border-line BOY. I developed the clever habit of bending my knees as I approached the turnstile, thus reducing my height to a more BOY-like dimension. But twisting through the turnstile with my knees bent proved impossible, so I gained height rapidly as I entered, always expecting to be challenged. I never was. No doubt the turnstile guy didn’t give a damn anyway. But I recorded my ploy as just another example of me being more clever than everyone else.

Once inside, I mixed with the yobs, the young working-class boys, always so friendly - the one place where I was relieved of the burden of having to know everything. Where the yobs knew a lot more than I did. I learned a lot from them, some of it soccer-related, the rest stuff that would have horrified my father.

Obviously, my sister was not a candidate for that rigmarole. There were special buses to the game, with game tickets included. So, for the first and - I’m pretty sure - only time, I purchased tickets to sit down at a soccer game in England.

As Ann and I got off the bus at the stadium, I don’t recall noticing the cold. Stoke was always a bleak place to me. But there was a surprise. No program sellers. Because there were no programs. As we entered the stadium, we were handed a single sheet of thin blue paper headed, in ominous black type “FUEL EMERGENCY EDITION”.

Just a list of player names. No numbers. Players didn’t have permanent numbers. The starting eleven was always numbered 1 through 11. If No. 9 got injured and had to sit out a game, his replacement took over the No. 9. And no subs.

So began my ordeal, my close brush with death by refrigeration. I was decidedly uncomfortable by halftime. By then I had realized that sitting down meant I couldn’t move around, couldn’t stamp my feet or jump up and down or move my arms vigorously. I was trapped. And freezing.

I asked Ann if she was OK. She was. Of course that irritated me - how could she be OK when I was turning to ice? The purgatory of the second half found me physically trembling, uncontrollably so. I conquered that, or so I thought, by refusing to believe it was happening. My sister continued to look annoyingly comfortable.

Frostbite then took over for a while, as my toes and fingers were clearly about to drop off. They didn’t, but my nose showed signs of turning to solid ice. I was afraid to touch it with my frost-bitten fingers lest it simply snap off in my hand.

No, I don’t recall anything about the game. I was at death’s door, don’t you understand? What did I care about the damn game?

Yet I survived, rather as all those intrepid arctic explorers did, without knowing how. How did I manage not to panic? How did I manage to straighten out, get up and walk to the bus? I managed, and luxuriated in the warmth inside, while my sister complained that there was no heat.

I hadn’t the heart, or the courage, to ask Ann whether she had enjoyed her first soccer game. She seemed quite pleased with everything. Even so, Ann never asked to come to another game.

I felt humiliated by the whole experience. My machismo was in tatters. My gentle sister had easily withstood the polar conditions, where I had nearly come to tears at the thought of being turned into a block of ice.

And Stoke City, damn them, had won the game 3-1, revealing that my soccer expertise was questionable. Two fine lessons to be learned from one frigid afternoon: forget the machismo crap, and stick to the facts, don’t listen to those emotional south-is-better-than-north judgments.

england
2 comments about "How I somehow escaped from freezing to death during a soccer game".
Read more comments >
Next story loading