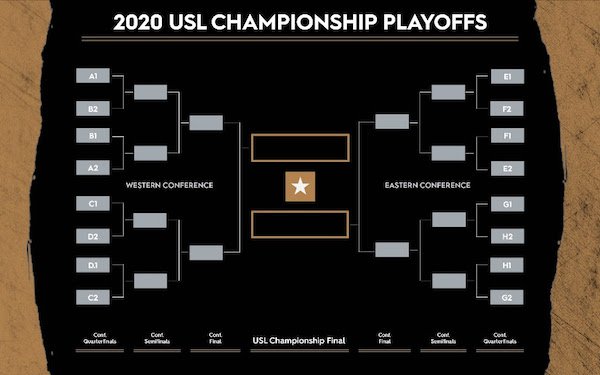 The USL Championship unveiled plans to complete its 2020 season with a 16-game regular season followed by a single-elimination playoff.

Here are five things to know about the revised format ...

2. Each team will complete a 16-game regular season, played over 13 weeks with a tentative start date of July 11 and final weekend of Oct. 2-4. Teams will play 12 games from within its own group -- three or four against each team, depending on the size of the group.

3. Games already played will be counted toward the 16-game schedule. Teams that played on the March 6-8 opening weekend have 15 games remaining in their schedule. Both San Diego and Tacoma also played on March 12 in the final U.S. pro soccer match held before the coronavirus triggered a shutdown of all sports activity, so they will have 14 games remaining in their respective schedules. Birmingham, Hartford and Pittsburgh were idle on the opening weekend and will play 16 games.

4. If teams are unable to play in their home venue because of local restrictions, teams can finish their seasons with an unbalanced amount of home and away matches.

5. The top two teams in each group will advance to the playoffs, producing a field of 16 teams for the single-elimination bracket. (The USL Championship initially planned on expanding its 2020 playoffs to include a wild-card round in its two conferences.) Group winners will host group runners-up in the round of 16. After that, home-field advantage will go to the team with the better record for the remainder of the pre-set bracket.