Salary caps in Europe -- is Schalke making the first move?

Credit where it's due to the Bundesliga. The Germans were the first of the major European leagues to re-start, and they're the first to finish. The prevailing emotion at the end of this drawn-out and fragmented season may be more relief than elation, but they dragged themselves and their teams across the finishing line, spectators be damned.

Was it worth it? The clubs will say yes, for the most part, because they are still in existence, and fears of coronavirus outbreaks thankfully never materialized. Money at the gate is not much compared with cash from broadcasting rights, so clubs like Schalke 04 -- that had claimed they were on the verge of bankruptcy just weeks after the shutdown began -- could continue to pay their players, and also continue their run of 16 games without a win. Thanks to TV revenue the league survived, and so did Schalke.

The Gelsenkirchen-based club, though, has apparently been having a re-think about the depth of those salaries that brought it to the brink so soon after play was suspended. According to a report in the Süddeutsche Zeitung, Schalke plans to introduce a self-imposed salary cap. From now on, no new contract will be negotiated that pays a player more than €2.5 million ($2.8 million) per year. Any player asking for more will not be signed.

Schalke is the classic latter-day model for short-term, myopic economic planning in a sports club. Through high transfer fees and salaries it has sought to buy success in recent years in an attempt to establish itself as a Champions League regular, merrily firing coaches and technical directors along the way. Its poor transfer policies are typified by the German national team midfielder Sebastian Rudy, 30, bought in 2018 for €16 million ($18 million) from Bayern München. Rudy didn't play well, so -- along with his €6 million ($6.7 million) annual salary -- he was loaned out to Hoffenheim after a year. Hoffenheim loves him, but can't afford that wage any more, and neither can Schalke afford to take him back. 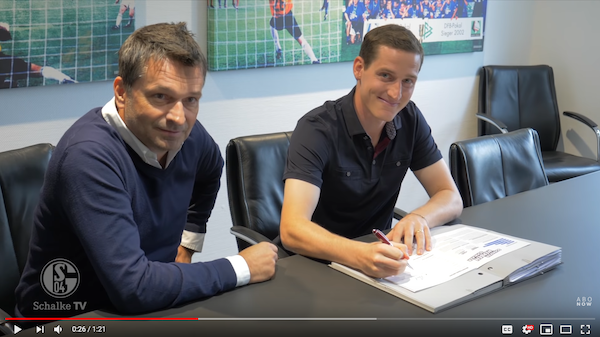 They may be forced to let him go for free (if anyone can meet Rudy's salary demands), two years after putting down significant cash to sign him as a marquee player. Or the player and his agent may have to negotiate a new contract, trending heavily downward.

A unilateral salary cap would be a brave move by Schalke, even if it's born of necessity rather than principle. A league-wide salary cap would require long negotiations, and serial champion Bayern would obviously argue that their chances of winning the Champions League would be scuppered by a financial straitjacket. The league's better talents would also desert the Bundesliga for more lucrative leagues. A Europe-wide salary cap would take longer still to negotiate, assuming that it's even legal at all under European Union law. Whether clubs would actually stick to any such cap is another question altogether. The wealthy will always find loopholes in laws designed to curb excess and avarice.

And yet a salary cap, together with a more fair and equitable distribution of TV money, should certainly be part of the discussion about what the European game will need in post-pandemic times.

The Bundesliga negotiated a new four-year TV contract earlier this month, starting with the 2021-22 season, and because of the pandemic it's around €200 million ($225 million) lower than the current four-year deal of €4.6 billion ($5.2 billion). That's the new reality reflected in the annual salary of a Sebastian Rudy -- a possible €2.5 million a year, down from six. You can now to take a somber moment to think about those making the sacrifice, with special thoughts going out to those hard-working agents taking a smaller cut. (In 2019, kicker reported last week, Eintracht Frankfurt paid more in agents' fees - €15.5 million ($17.4 million) -- than it did for their dearest signing, Djibril Sow, who cost €10 million ($11.2 million).)

Of course many clubs operating on small budgets have been self-imposing salary caps for decades. Schalke's down-graded ambitions (survival over glory) merely serve to highlight the still growing gap between the Champions League elite and The Rest. The Bundesliga concluded on Saturday with the unavoidable, mind-numbing and depressing statistic that Bayern München had just won their eighth successive German league title, and again they did it at a stroll. It was their 30th. Overall -- more than all the other clubs put together.

So, survival aside, and duly giving credit for having Got The Season Done, the Bundesliga has a huge problem accidentally personified by the hollow games in empty arenas over the past few weeks -- ennui. While they expend significant resources to market the league and its over-hyped tradition around the world, everybody knows before a ball's been kicked who's going to be champion. I will now risk my hard-fought reputation as a pundit and say that next season Bayern Munich will win a ninth title on the trot, and then the season after that they'll take a 10th.

It's obligatory at this point to mention the similar predictability of the Spanish, Italian, French and English leagues too, citing the sharp imbalance of wealth that was created thanks to the greed-driven foundation of the Champions League in the 1990s. The question for the Bundesliga and its European sister-leagues is: in more parsimonious times, what will they do to combat this competitive stagnation and at least make a token attempt to level the playing field? Schalke's taken a tentative step with the aim of self-preservation. Much more radical collective moves need to be made, though, in order to preserve and then improve soccer as a whole.