In November 2019, Appalachian State's Board of Trustees approved another $5 million expenditure added to the $45 million for the construction of a building, known as North End Zone project, attached its football stadium. 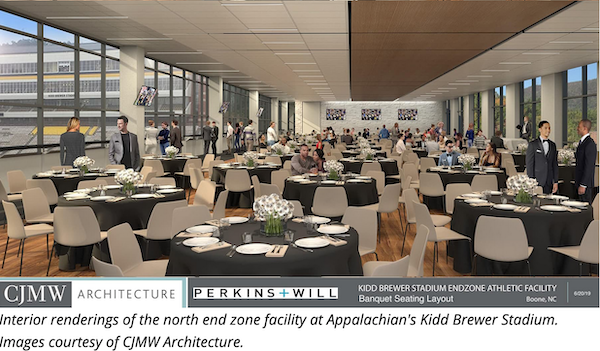 The move was aimed to save its athletics department about $1 million, according to the Greensboro News & Record, as App State Athletics aimed for a $5 million reduction of its next fiscal year budget. Cutting the sports, App State announced, was "in response to the financial impact of the COVID-19 pandemic and in an effort to position App State Athletics for future success."

The men's soccer operating expenses, from the NCAA financial report for fiscal year 2019, were $607,047 (including scholarships), with $44,548 in revenue. But sports economist Andy Schwarz in the News & Observer estimated that the three cut sports had brought in approximately $400,000 in tuition income. App State men's soccer offered 7.66 scholarships and half of the men's soccer roster of 30 players paid full tuition. Schwarz also pointed out that App State will loss $206,340 in funds from the NCAA by decreasing its number of sports programs.

In July, construction continues on the $50 million North End Zone project, as does the $2.5 million project of replacing the artificial turf in the football stadium and the regrading of a grassy hill behind the south end zone "to bring it closer to the stadium."

In 2014, App State moved its football team into the FBS, the top tier of college football, and competes in the Sun Belt Conference. Upon announcing the soccer, tennis and indoor track cuts, Athletic director Doug Gillen -- who in January received a contract extension that more than doubled his annual income to $500,000 in base salary and retention bonus in 2020 -- said: "Since the move to FBS, App State has sponsored the most sports in the Sun Belt and among the most in the Group of Five. This will bring us in line with most of our peer institutions."

Moving to the FBS increased football scholarships from the FCS limit of 63 to 85. And football, a sport with no women's equivalent, also puts enormous expenditures, $3 million worth of athletic scholarships, and 98 players on the men's side of the Title IX scale.

The App State football team's operating expenses, from the NCAA financial report for fiscal year 2019, were $9.75 million, with $5.26 million in revenue -- for a deficit of $4.49 million.

As App State forged on with football-related projects despite the uncertainty of when college football will return amid the pandemic, men's soccer Coach Jason O'Keefe, who rejuvenated the program after arriving in 2016, had to call an emergency Zoom meeting with his returning players -- including nine seniors -- and the incoming recruits to tell them: Their team was no more. 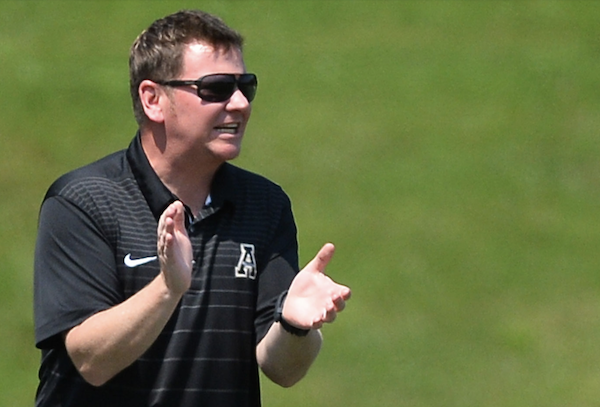 "I was raised by a single mom, so my teachers and coaches were a big influence," he said. "So I wanted to teach and coach. I went to Greensboro College, because they had a good education program and a very good Division III soccer program."

Upon graduation, he taught history and other classes -- and was an assistant coach in basketball and men's and women's soccer -- at Grimsley High School in Greensboro. He also started coaching at Greensboro Soccer Club with his college coach, Steve Allison. After three years, he left teaching with the aim to reach higher levels of coaching.

"I'd give myself five years, and if it didn't work out, I'd get recertified as a teacher," said O'Keefe, whose early work as an assistant coach included a stint with powerhouse Wake Forest. He got his full-time job as assistant coach at Cinncinnati, in 2006 when it won the Big East title. After assistant coaching stints at Elon, St. Louis and North Carolina, he landed the Appalachian State head coaching job in 2016.

In the late 1970s, under head coach Hank Steinbrecher, later U.S. Soccer's general secretary, Appalachian State was a national power. Nigerian Thompson Usiyan set records for most goals in a season (46 in 1980) and is still the all-time NCAA Division I scorer with 109 career goals.

When O'Keefe arrived, the Mountaineers' hadn't posted a winning season since 2012, despite being a major university in a state that is a soccer hotbed. He changed that in 2018. Last season App State won 11 games for the first time since 2002, scored its most goals since 2009, and posted its most shutouts since 2011. Its 11-7-1 record in 2019 included the Mountaineers' first victory over North Carolina since 1980.

O'Keefe's team also ranked fourth in the nation in community service hours logged by a Division I men's soccer program and racked up academic honors from United Soccer Coaches and the Sun Belt, with seven players posting a GPA above 3.5 and another 10 between 3.0-3.49.

"We were primed and ready to take another step, like winning the Sun Belt, making the NCAA playoffs, posting another double-digit winning season," he said.

Instead, O'Keefe had spent the last month helping his players connect and figure out how to continue their college soccer careers elsewhere. His players were sad, shocked and angry when he had to tell them the program was dropped. Now, nearly all are being welcomed by other college soccer programs, and O'Keefe can start trying to navigate his own future.

* * * * * * * * * *
App State says  its $50 million stadium project supports the UNC Systems Goals and Metrics because: "An enhanced experience for student-athletes and fans can go a long way in recruiting new students. It also can cultivate donors, which in turn supports scholarships for students needing financial assistance to attend college."