Was British soccer ever that great?

Some years ago I read an article in the English press that greatly irritated me. I tore the page from the newspaper and put it aside for further study.

Around here, putting things aside is pretty much the same thing as mislaying them. The page quickly vanished, buried in the heap of similar cuttings and clippings, classified (by me) as TBF, To Be Filed.

This quarantine-enforced boredom has led me to look through a TBF mound (there are several), hence the surprise unearthing of that annoying -- but forgotten -- article. It now stares defiantly back at me from my desk. A page from the Daily Mail, October 6, 2013, with an article by “Football’s Best Columnist.” So it said, the columnist being former Manchester United defender Gary Neville.

In 2013 Neville was enjoying a new-found fame as a TV guru, widely praised for his analysis and his willingness to criticize. The fame seemed, to me, totally misplaced. I found it narrow-minded -- limited to English soccer, and a viewpoint dominated by Neville’s experience as a defender.

How on earth, I pondered, could someone living, writing and guru-ing in England, home of the Premier League where 70% of the players were not English, be so unaware of foreign influences in the sport?

So, to be confronted with a banner headline reading “We’ve forgotten just what made British football great” by “football’s best columnist” - well, I mean, how irritating can it get?

As I glare back at the column on my desk, all my old vexations return. For a start: when, exactly, was British football so great? When was this golden age? Possibly in the late 19th century when Britain was the only country where the sport was played? Maybe for a few decades after that as the quarrelsome Europeans and the devious South Americans began to learn.

I first heard about British superiority in the 1940s. England had never been beaten at Wembley Stadium was the claim. Quite probably, I joined in the boasting. The claim was, of course, spurious. England had already lost twice to Scotland at Wembley, but that didn’t count as, presumably, both were playing British soccer.

When I investigated the Wembley boast more closely, many years later, its falseness was clear. Was it coincidence (or simply xenophobic snobbery?) that, when a strong European opponent arrived, Wembley was not selected as the venue? Spain (1931) and Italy (1934) both played at Arsenal, Austria (1932) at Chelsea.

But the most resoundingly hollow part of the boast was the absence of any South American opposition until 1951, when Argentina arrived. The Wembley deception got what it deserved in 1953 when the Hungarians obliterated England 5-3.

That humiliation could be conveniently forgotten 12 years later amid the celebration of England’s 1966 World Cup win. That was the highpoint. For England, there has been nothing that could possibly be termed “great” since then. Some very good players, yes, but never a great one. Not even the lavishly worshiped David Beckham.

Yet here was Neville, in 2013, still yackking on about the once-upon-a-time British greatness. I think it’s pretty well established that people who sing the praises of once-happy bygone golden days have lost touch with reality. They are dreamers.

Neville looks back to 1966 and dredges up the name of Nobby Stiles, a midfielder on the England team. A word or two about Stiles. No one who’s thinking straight would link Stiles with the word great. His one acknowledged football specialty was fierce - and dangerous - tackling. 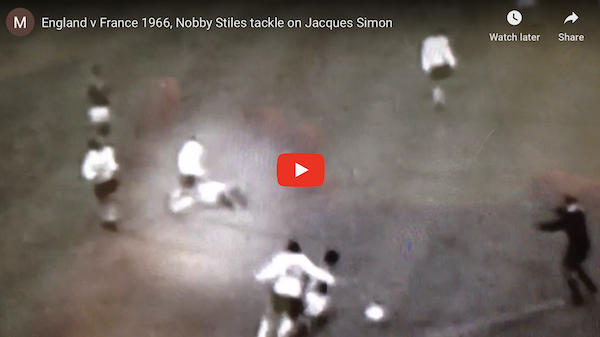 This “talent” was to be seen in England’s first two games in 1966. In the third game, against France, Stiles’ assault on Frenchman Jacques Simon was so blatantly violent that there were calls for Stiles to be dropped from the team. The calls came, not from aggrieved opponents, but from senior members of the English delegation itself. Coach Alf Ramsey stood by Stiles, and the matter was not pursued.

Yet here is Stiles being praised by Neville: “Back when I was playing for Manchester United’s youth team [early 1990s] I could always hear the voice of our coach Nobby Stiles ... delivering short, sharp messages: “Get to the ball quickly!” “Win it back!” “Get to him!” Shift it quickly! Move! ”

A short, sharp memory of my own intrudes. I was in Sweden for the 1991 Gothia youth Cup. I had been assigned a disagreeable driver to get me to some games. He dumped me at a deserted roadside. I could see no games. “Over there,” he said, “You have to go down.” And he sped off, leaving me fearing I would be attacked by wolves. Hell, did they have wolves in Sweden? Polar bears, then. I fled quickly into the grass, still not seeing a soccer field, but now I could hear shouts.

It might have been Nobby Stiles. “Run!” “Move your effing arse!” “Go on!” which came over as a snarling “Garn!" I caught glimpses of a soccer ball in the air in front of me, flying this way, then that. I hadn’t quite got down to field level yet, but there could be no doubt - the frantic, ugly yelling, the ball spinning way up in the air - I was approaching an English team in action.

It was predictably horrible, yet the coach with his constant verbal whip-lashing was behaving as Neville would wish, nothing more complicated than yelling for a faster, more physical approach. Soccer skills? Forget it. Getting “stuck in” has always come first in England.

That is what Neville is praising as the foundation of England’s supposed “greatness.” There is virtually no mention of soccer skills, or the merits of skillful players, in Neville’s fantasy. All that’s necessary is “organized hard work” and players “with an intent to work their backsides off.”

England, says Neville, has made the mistake of trying to become more technical and creative - which has “made us forget the things we’re good at.” And, horror of horrors, “We’ve started to indulge a few players.”

Neville, confronted by massive changes in the game, as reflected in the changing styles of top European teams, can see nothing new. What Barcelona and Bayern Munich are doing is merely what English soccer, at its best, has always done. His claims are nothing more than a repetition of the long-standing and moth-eaten English belief in a physical game, and that you cannot win with “pretty soccer.”

Logically, Neville finds it impossible to praise skillful players. He closes that 2013 column with this extraordinary appeal: “But don’t let anyone tell you the most impressive thing about Barcelona and Bayern Munich is the quality of their football. It’s not. It’s their work off the ball that is sensational and a privilege to watch.”

Which reminds me of former Norwegian coach Egil Olsen’s famous -- and fatuous -- claim that Norway was “the best team in the world, without the ball.” Such a pity that Norway never won anything. And a mystery that Norway never amounted to a major attraction - soccer fans, it seems, like the ball to be at the center of the action. Paying large sums of money for “the privilege” of watching players work “off the ball” has not caught on quite yet.

england
11 comments about "Was British soccer ever that great?".
Read more comments >
Next story loading