You’ll find Lexington, Nebraska, right in the middle of the USA map. But being centrally located in this case doesn’t equal convenience for young soccer talent aiming to climb the ladder of elite competition.

A town of about 10,000, Lexington lies far from more populated cities where mainstream soccer provides opportunities for young players to be discovered by college coaches or pro scouts. Yet Lexington is one of those pockets in the USA teeming with young soccer talent. In its case, the source of the soccer culture comes from the meatpacking plant built in 1990.

The meatpacking industry has traditionally relied heavily on immigrant labor, and in recent decades the percentage of Latinos among meatpacking workers in the USA has reached nearly 50 percent.

Meat-processing firms also increasingly relocated plants to rural areas to bring them closer to livestock sources and farther away from union strongholds. That resulted in Latino migration to Midwest and Southern states – and communities such as the one in Lexington where soccer is the children’s predominant pastime.

Paul Cuadros’ 2006 book “A Home on the Field: How One Championship Soccer Team Inspires Hope for the Revival of Small Town America” and its spinoff 2014 TV documentary series famously recounted how a small North Carolina town’s demographics changed with the influx of Latinos who arrived to work at a chicken processing plant – and the importance of soccer to the community.

Nebraska is home to 11 major meat-packing plants -- recently in the news because of their high coronavirus outbreaks -- including the Tyson plant in Dakota City near Sioux City, Iowa.

“You see these meat-packing companies throughout the Midwest,” says Johnny Torres, head coach of the Omaha-based Creighton University’s men's team. “There are so many talented young players – the children of people working in meat-packing companies – in these towns. Places like Lexington, Grand Island, Sioux City ... But they don’t have many opportunities.”

Torres is also an ODP coach and one of the players who’s gotten his attention over the past couple years is Lexington’s Yoskar Galvan.

“The big challenge is transportation,” Torres says. “In Yoskar’s case, his father travels countless hours for him and some of his teammates. It’s three or four hours one way to come up here for ODP.”

Galvan, age 16, is the son of parents of Guatemalan and Salvador heritage. Both work at Tyson Fresh Meats. 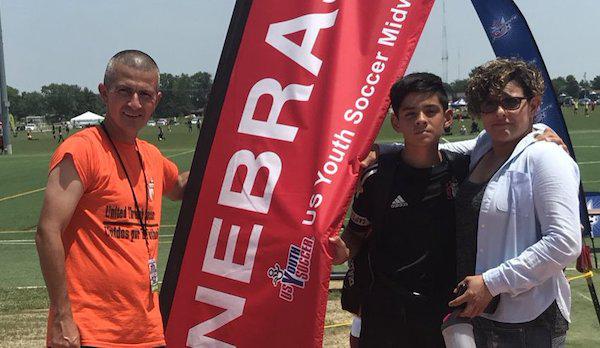 His father Wilmar Galvan also coaches at the local club, Lexington Unifut, which he started along with Milton Morales, Miguel Perez and Ivan Tovar in 2009 with 30 players. In 2015, Lexington Unifut, which has grown to about 400 players, affiliated with the state association, launched travel teams, entered state cups, and started bringing its players to ODP and other player ID events.

“We went to State Cup, President’s Cup and we were going to play in the regional league but we ended up not doing it because we didn’t have enough money,” says Yoskar Galvan.

Last year, Yoskar Galvan’s Unifut team played in a tournament in Denver (a five-hour drive) that coincided with the Alianza de Futbol player ID event that is especially popular among Liga MX club scouts. Galvan got invited to a trial with Pachuca's youth academy and was Alianza’s top Access U scholar recipient. Galvan didn't go to Mexico. He previously tried out for the Development Academy club/boarding school Shattuck-St. Mary's School in Minnesota and was accepted. But the tuition was out of reach. In October, he guest played for Union Omaha at the USL Academy tournament in San Antonio. 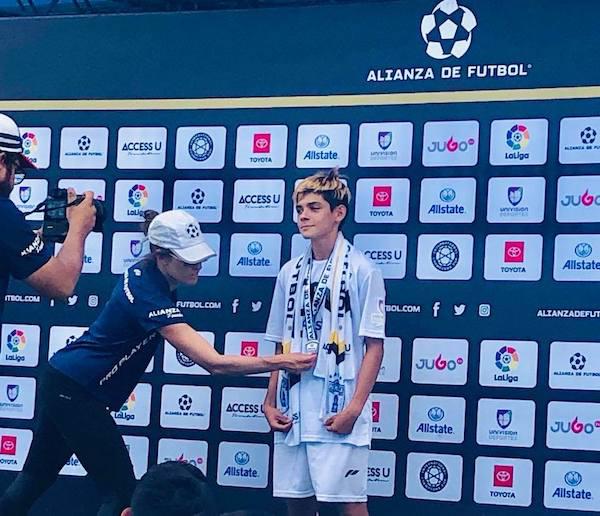 Morales’ wife Rebeca De Leon, an elementary school Spanish teacher, is the Unifut club president and handles all non-coaching duties. She and the club’s coaches are all volunteers. Morales works at a Walmart and the other coaches work at the meatpacking plant. De Leon said several families in the club, including her own, suffered from Covid, but have recovered.

Tyson pays for the club’s uniforms every two years. Unifut runs two indoor programs a year, charging $30 for the kids who can afford it, and that helps pay some of club costs.

“That money helps pay the fees to state association, the coaches' background checks every year, coaching education ...” says De Leon. She arrived in Nebraska as a child in 1994 when her parents, Guatemalan immigrants, heard about the meatpacking jobs and moved the family from San Francisco.

The high school senior class of 2021 that includes Galvan will be the first to graduate since Unifut entered the world of travel soccer.

“Traveling to tournaments and ID camps is very expensive and unfortunately the club can’t cover all of that because we don’t have enough funds,” De Leon says. “There are a lot of opportunities we just can’t give these boys. But as they get closer to college, we try hard get them as much experience as possible.”

Most of the players’ parents, because of work, aren’t able to drive them to the competitions that are three to five hours away. De Leon and the coaches, who often contribute personally to players' travel expenses, like meals, and arrange transportation best they can.

“It’s usually my husband and I, and Yoskar’s dad,” says, De Leon whose sons, 17 and 9 years old, play for Unifut. “We usually have one parent, two if we’re lucky. Wilmar bought a 12-passenger van. We work together to get the kids to the games.”

The cancellation because of Covid of the high school season meant Yoskar Galvan missed out on his junior year of play. He’s spending his summer working at Dairy Queen and looks forward to the fall club season, when he plans to play for Gretna Elite Academy in Lincoln, Nebraska, even though it’s more than two hours away.

“I think that will get me more exposure,” Galvan says. “I want to go to college and then I want to go pro. That’s always been my dream.”