With a game that included a fortuitous misplay from the 21-year-old American Josh Sargent and three goals in the last 10 minutes, Werder Bremen staved off relegation and maintained its record for most seasons in the Bundesliga. After tying Heidenheim 0-0 in Bremen in the first leg of promotion/relegation playoff, Werder Bremen took the lead in the third minute of Monday's game when Sargent lost control of the ball at the edge of the penalty area and Norman Theuerkauf slammed it into his own net. Tim Kleindienst equalized for Heidenheim with in the 85th minute for a 1-1 tie that left it needing one more goal to avoid the away goals loss. Ludwig Augustinsson's strike four minutes into stoppage time gave Werder Bremen the 2-1 lead that required Heidenheim to score twice. It did scoreonce, on Kleindienst's 97th minute penalty kick, but 2-2 tie gave Bremen the away goals win. 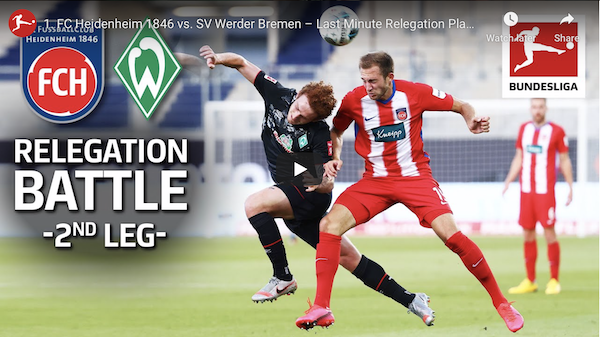