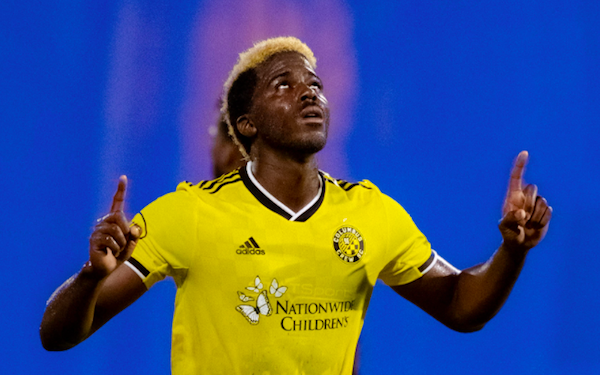 In its first week, the MLS is Back Tournament has had games postponed and two teams withdrawn from the tournament due to Covid-19 outbreaks or protocols.

On Saturday night, MLS was finally scheduled to get in its first evening doubleheader of the tournament -- with the first game and only game of the tournament on the Fox network -- when a more familiar foe struck.

The start of the opening game between Atlanta United and the New York Red Bulls was delayed 45 minutes after torrential summer rains struck the Orlando area.

It was well past 1 o'clock in the morning when the second game between the Columbus Crew and FC Cincinnati ended. Mercifully, Cincinnati fans would add.

Hell is Real. New FC Cincinnati coach Jaap Stam -- the fourth different coach in 37 MLS games -- made his debut on the sidelines and could only watch as his team was pounded by the Crew, 4-0.

Crew coach Caleb Porter said he called the Zelarayan goal to his assistants.

"We've scouted this guy extensively and I've seen him make that play time and again," he said. "It's one of the reasons we signed him. He has the ability to change a game in a moment, he drew the foul and he hits a dead ball. And top players, that's what they bring and it's just great to see, there were times last year where we didn't get those types of play."

Stam was introduced as FC Cincinnati's new head coach on May 21 but it was almost another month before he was able to get on the field with the second-year MLS team, whose head coach, Ron Jans, resigned in preseason. Young French assistant Yoann Damet coached FC Cincinnati in the first two games of the MLS season, both losses.

FC Cincinnati has some chances early in the game, but things started to fall apart after Zelarayan's opening goal in the 27th minute.

By the 60th minute, the game was a rout, allowing Porter to bring on a pair of Homegrown players for their MLS debuts, Aidan Morris and Sebastian Berhalter, the son of U.S. national team coach Gregg Berhalter.