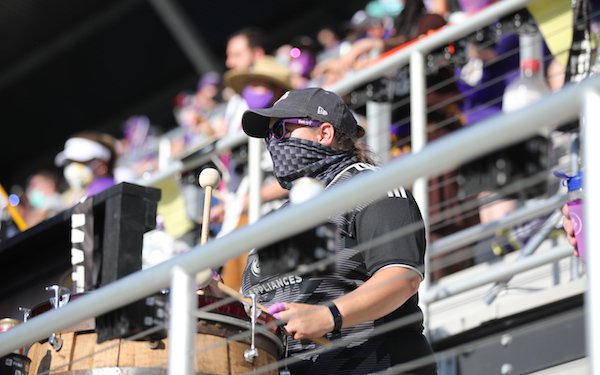 Four months late, Louisville City was finally able to open its new stadium on Sunday but not with full house it was expecting.

The $67 million Lynn Family Stadium, located in Louisville's Butchertown neighborhood, holds 15,304 fans. LouCity had permission to open up half of the new stadium but only about 30 percent was made available due to Covid-19 restrictions.

After setting six feet -- or three empty seats -- between family seating pods -- 2,502 of 9,288 chair-back seats were made available. Other tickets were sold in the club section and standing room-only supporter zones behind both goals.

Fans entering the stadium were given temperature checks, and they were supposed to wear masks except when they were in their seats and social-distance.

LouCity's opener against Pittsburgh ended up drawing a crowd of 4,850, the most of any of the USL Championship games at which fans were allowed to watch.

Unfortunately, Bob Lilley's Riverhounds spoiled the party with a 3-1 win in a rematch of the 2019 Eastern Conference final.

Jamaican Speedy Williams put LouCity ahead in the 18th minute, but the Riverhounds responded with three minutes in six minutes, beginning with Jordan Dover's equalizer in the 45th minute and followed by goals by Robbie Mertz and Anthony Velarde, both assisted by Ropapa Mensah.

“It felt like a real professional game," Williams said of the atmosphere. "Everything just felt right. Unfortunately, we couldn’t get the win.”

The game was the start of an eight-game homestand for LouCity, which will play 11 of its 15 games after the restart at home as part of the USL Championship's unbalanced schedule to complete the regular season.