MLS is Back: Another comeback, this one the best yet by the Quakes 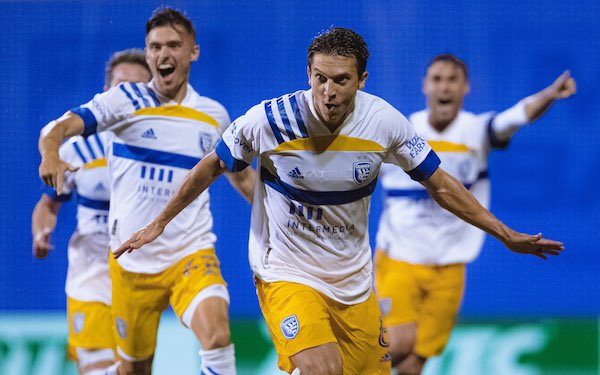 MLS is Back Tournament has already had its share of comebacks in Week 1:

But the tournament has seen nothing like Wednesday's San Jose-Vancouver game. The Earthquakes broke an MLS record with 22 corner kicks but were trailing, 3-1, thanks to some blundering defensive errors when head coach Matias Almeyda went to his bench for a quadruple substitution.

"As a coach," the Argentine explained afterwards, "I don’t want to depend on one or two players. I look for equality and for them to be even and they have to know what to play for. It was hard going into 3-1, but they gave everything they had."

San Jose completed the latest comeback with three goals in the latest 18 minutes to win, 4-3.

Two of subs scored -- Chris Wondolowski with the first goal and Shea Salinas with the winner in the eighth minute of stoppage time -- while a third, Danny Hoesen, assisted on Wondo's goal, which went through the legs of the fourth sub, Carlos Fierro, into the nets.

Since Almeyda took over as the San Jose coach in 2019, the Quakes have usually been really good or really bad. More often the latter, unfortunately.

Wednesday's game epitomized that. The Quakes had a 30-7 edge in shots and led 22-4 on corner kicks, but were in danger of losing to Vancouver, which was making it tournament debut a week after its start because of scheduled opponent in the opener, FC Dallas, was removed from the tournament due to a Covid-19 outbreak.

On the second 'Caps goal, Yordy Reyna looked to set up teammate Cristian Dajome for an easy goal on a breakaway, but his pass fell into the path of Quakes midfielder Judson and his hustle directed the ball over the line for the own goal. On the third Vancouver goal, San Jose goalkeeper Daniel Vega's pass went straight to David Milinkovic, who fed Dajome for the Colombian's first MLS goal to restore the ‘Caps' two-goal lead.

“What happened there was a team that maintained their identity when they faced adversity," said Almeyda, "a team that’s searching for their own style, a team that respects each opponent they face, and they never give up."

mls
1 comment about "MLS is Back: Another comeback, this one the best yet by the Quakes".
Next story loading