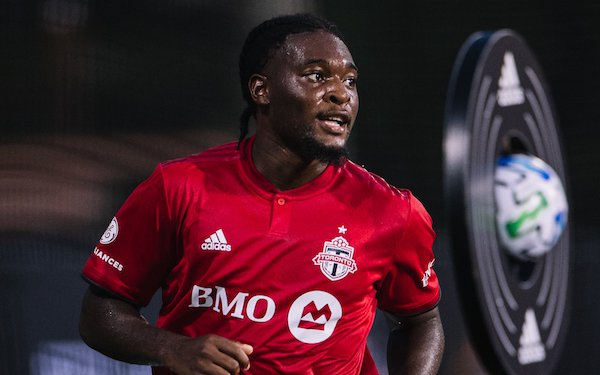 Ayo Akinola, who entered the MLS is Back Tournament with one goal in 12 games spread over two MLS seasons, was given a shot up front by Toronto FC with star Jozy Altidore still not fit because of his delayed return to training in June.

All the 20-year-old forward has done is score five goals in two games. After scoring twice in the first half of Toronto FC's 2-2 tie with D.C. United, he scored a hat trick on Thursday in the 4-3 win over Montreal. Akinola became the first MLS player player born in 2000 or later to record a hat trick and just the third with a hat trick before his 21st birthday.

Akinola played for the USA at the 2017 Under-17 World Cup and in qualifying for the 2019 Under-20 World Cup but missed the finals in Poland when he was ruled out due to an ankle injury days before the opener. He has played mostly on the wing for the USA but is being used at center forward.

"I've always viewed him as a striker," said Toronto FC coach Greg Vanney. "In his head, he's always been trying to come to grips with just who he is the professional level, what he's going to be most successful at as a professional. For us, it's always center striker who plays between the center backs or off of the one center back tonight because they played in a back three."

Vanney said he always saw Akinola's potential, but the key was the youngster believing in himself and getting himself fit.

"He uses his power and his speed and his aggressiveness in front of goal," he said. "Because he has soft feet, he can hold things up. But he's just so powerful and fast and I always envisioned him as this guy, the guy he is showing now."

Have a day, Ayo Akinola!

The 20-year old follows up a brace with a hat trick vs. @TorontoFC's rivals. pic.twitter.com/v3m06hacfw

Four of Akinola's five goals have come on assists from Spaniard Alejandro Pozuelo, who also assisted on the fourth goal against Montreal, scored by Richie Laryea.

"He's got an experienced guy like Pozuelo who is guiding him through the course of the game, helping him with some information," added Vanney, "but also a guy who can provide you with really good chances. I think Ayo, on a team like ours, is always going to get opportunities, and he's putting them away. And that's one thing he can do. A guy like Ayo is always going to get his chances, and the question is putting them in the net. For sure, he is now."

For his part, Akinola says he is thriving in part because the Florida weather, a problem for lots of other players, is something he is used to.

"I'm kind of used to it," said Akinola, who was part of the last U.S. U-17 class in residency in Bradenton in 2016-17. "A few years back, I used to live down here, being a part of the residency program for the United States. I was already used to the weather. It was not a big deal for me."
-------------------------
Altidore is with the Reds in Florida but is still working himself back into fitness after he was forced to quarantine for 14 days under Canada's strict rules for returning residents from the United States. He was given permission from TFC to move out of market during the shutdown and return to Florida, where he was born and raised.