Longtime Division I head coach Dean Koski on canceled fall sports: 'We can run and hide, or we can adapt'


“This is awful,” they said. “You and your players must be crushed.” “How terrible!”

Koski was surprised. No, he thought to himself. More than 3.8 million people have been diagnosed with COVID-19. More than 140,000 Americans are dead. Our entire way of life has changed. All the Patriot League did was cancel three months of sports – and retained the possibility of playing them this spring.

“Don’t cry for us,” he thought. “We’ll be fine. We’re healthy. Our players are young. This is a responsible decision we should embrace and support.”

Facebook is Koski’s go-to social media platform. Quickly, the coach – the winningest in Mountain Hawk history, who in 28 years has led his teams to five NCAA Division I tournaments, and last autumn their third league title – posted a strong message.

“This is the right decision for our student-athletes and athletic community. I support (it),” he wrote. “Please do not feel sorry for me or my student-athletes. We are good. We are excited and perhaps relieved that we don’t have to worry about our fall season being canceled halfway into it.”

Koski added, “We have always preached to our S-A’s [student athletes] the importance of adapting to your environment, be it sport, work or life. Those that can adapt and see this as an opportunity will grow as a result.”

He said that Lehigh men’s soccer would “take advantage of the fall segment to teach more, learn more, train better and grow closer as a team.” 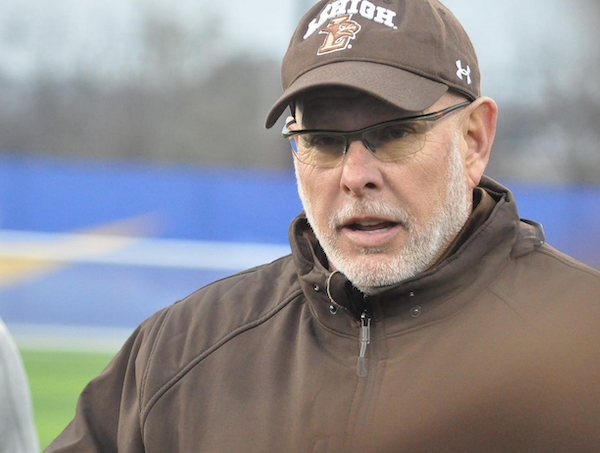 Several days later, in an interview with Soccer America, Koski elaborated on what he’d said. An Outward Bound experience when he was in college made him realize the importance of adapting to one’s environment. Now, he explains, “we tell our athletes, ‘you never know what will come during a season.’ If we go to Colgate and it’s rainy and cold, instead of saying ‘this sucks,’ we say, ‘we’re playing. Let’s take advantage of this!’”

The coronavirus is the reality of the current environment. “We can run and hide, or we can adapt. When life taps you on the shoulder, make sure you’re facing in the right direction.” He and his staff have already begun adapting their coaching model. Koski notes, “When you’re in season, it’s crazy. You’re either preparing for a match or recovering from one. The only real time to teach is preseason, and even there it’s rushed.”

The spring season – with more time between matches, and less pressure for results – is a better opportunity to teach techniques and tactics, individually and as a group. This fall will be like those springs, Koski says. The team will train Monday through Friday. Players may be separated into two groups, and play an intra-squad game under the lights on Friday or Saturday.

“We can spend a week on forwards holding the ball. We’ve never done that,” Koski says. “My mind is racing with possibilities.”

It’s similar with building team chemistry. A normal preseason allows little time to work freshmen into the system; they’re thrown in the mix. Upperclassmen do their best, but they are concerned with their own roles and performances. This fall, the Lehigh staff and returning athletes can spend quality time with their new teammates.

“As coaches we’ll have two to three months to get to know the freshmen, and them to know us,” Koski says. “In a two-week preseason, people sometimes make premature judgments.”

Koski even sees an upside for seniors. Fall is typically a stressful time. In addition to leading the team, fourth-year student-athletes meet with career services staff, interview for jobs and worry about their future.

Those distractions will no longer impact seniors. In fact, Koski says, figuring out their next steps this fall will allow seniors to truly enjoy the spring season. It may be competitive, like the traditional autumn. Perhaps it will include only training, with a few matches. Either way, seniors will be welcome.

Having raised four sons – three of whom are currently on the Mountain Hawks’ roster – Koski says he no longer coaches “soccer players.” Now, he realizes, “my job is to coach boys to become men. I coach human beings.”

He’s coaching his alumni and friends too. “Don’t cry for us,” he told them on Facebook. “We’ll be fine.” Whenever the next Patriot League season comes – next spring, or the fall of 2021 – he and his players will be grateful. And ready.

college men, youth
6 comments about "Longtime Division I head coach Dean Koski on canceled fall sports: 'We can run and hide, or we can adapt'".
Read more comments >
Next story loading